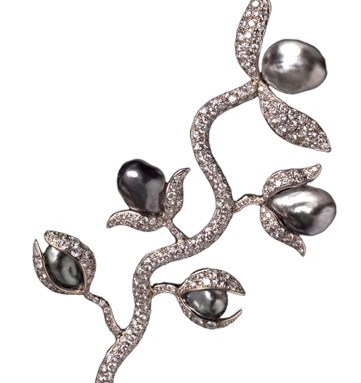 LONDON — Celia Weinstock’s debut collection of jewelry is a clash of worlds: East and West, elegant and bohemian, historical and high tech.

The collection made its U.S. debut this month at Mallett on Madison Avenue. It is called Lyme Fine Jewelry and is named for Lyme Park, the estate of her mother’s family in Cheshire, England, which is now owned by the National Trust. The New York show is called “First Cut: New Jewelry by Celia Weinstock.”

Weinstock, 24, said her mother — a jewelry collector — got her hooked on gems.

“As a child, I can remember reading the Sotheby’s and Christie’s jewelry catalogues she had at home,” said Weinstock, whose family is part owner of Mallett, the antique furniture dealers.

She majored in modern history at Oxford, and studied jewelry design at the Gemological Institute of America. Not surprisingly, the historical references are many.

“I’m inspired by the jewelry of the European courts and spend a lot of time at the jewelry galleries at the Victoria and Albert,” Weinstock, who is quiet and reflective, said during an interview at Mallett on Bond Street.

Weinstock, however, doesn’t linger too long among Europe’s aristos. The collection also features Far Eastern inspired pieces, such as a bracelet made of diamonds and carved jade butterflies, which are a romantic symbol in China.

Weinstock, whose pieces are delicate, colorful, and often inspired by the organic world, said her major inspirations are Joel Arthur Rosenthal, the jeweler behind JAR, and vintage Cartier.

Although much of this collection channels the past, its craftsmanship is all about the future. Weinstock uses workshops in Taiwan that offer an array of colored gold, including black, gray, and brown, which appear in her collection. She uses gray gold to mimic the oxidized silver of heirloom pieces, and black gold, too, for a mirror effect. “Next time, I’m using blue gold — it’s a dark, intense blue,” Weinstock said.