Since his arrival in 2013, Babin has focused on expanding the Rome-based company's product offer, developing its manufacturing capabilities, global distribution and international footprint with the goal of creating new jobs.

MILAN — Jean-Christophe Babin is drawn to “people that have energy and enthusiasm, who have ideas and the courage to fight for them, and who, as in soccer, believe that a collective game is more profitable than an individual game. Autonomy and individualism are two very different things.”

One of his first strategies upon his arrival at Bulgari in 2013 from Tag Heuer was to render the company “much more ambitious. In the 2000s, Bulgari was convinced its jewelry had reached its peak success and that it needed to diversify to grow.” While admitting this strategy helped build a solid watch, perfume and hotel business, Babin believes Bulgari had room to grow in its core category and was “very, very far from that peak,” compared to brands such as Cartier and Tiffany.

“I tried to raise the level of ambition, in particular on jewels because for me, given the historical excellence of the company in high jewelry, that was the area where customers expected the most,” recalled Babin. “Bulgari in the Forties and Fifties had created a style in jewelry that was very different” from French or American brands and that could be anchored even more in Rome.

“The brand was already implicitly Roman, but we have tried to make it much more explicit, from creativity — in particular on high jewelry — to communication, to really emphasize our difference: we are very high-quality but also very joyful, colorful, rich in contrasts and architectural shapes that contribute to masterfully create distinctive jewels. The Italian lifestyle is probably the most attractive in the world, and this magic word, ‘Roma’ that is universal, is almost more well-known than Italy as a name,” said Babin, who further leveraged this asset, believing it would drive Bulgari “to become a leader.”

The launch of the B.zero1 line in 1999 “is what changed the company the most,” said Babin, with the introduction of a first accessible jewel that went on to have “great success and great diffusion,” but which was introduced with little communication, he argued. “We started to put more resources into communicating about B.zero1, which after 15 years was not as well-known as Van Cleef & Arpels’ Alhambra, for example.”

Emphasizing the creativity of the B.zero1, “surely the most interesting” step was working with architect Zaha Hadid, “who totally rethought” the shapes with her “undulated style creating a very beautiful and successful design.” Tapping Bella Hadid to front the campaigns also helped relaunch the line’s communication globally.

A similar strategy was mapped out for Bulgari’s Serpenti and Diva, fronted by Lily Aldridge, as well as the new Fiorever collection, which now celebrates its first year. Ursula Corberò was tapped as the face of the latter.

The collections must be timeless, said Babin, but at the same time injected with creativity and innovation, while respecting their identity and spirit, as in the case of the Zaha Hadid B.zero1 design.

A new B.zero1 will be launched next year and “the idea is to accentuate one of the existing strengths of the collection, its unisex attraction,” revealed Babin. “We already know that the B.zero1 ring is worn by many men, and it is not an indifferent customer base. This for us is surely a development opportunity. We can imagine more masculine geometries compared to Hadid’s feminine waves but we will not make it a ring or a pendant for men — it will be in sync with the genderless trend.

“There is an interesting men’s market that can become even more sophisticated, through audacious designs and colorful stones, precisely because men need fantasy and today more than ever they are not content with the usual classic designs, but want to differentiate themselves,” mused Babin.

Bulgari fits into one of the best-performing categories at the moment. The personal luxury goods segment is seen growing 7 percent to 281 billion euros in 2019, driven by China and young generations, according to the most recent Altagamma Worldwide Luxury Market Monitor by Bain & Co. and jewelry, boosted by high jewelry in particular, especially in Japan and Mainland China, is a driving division, seen gaining 12 percent in the year.

“Of a company, you don’t change the origins, the style, the customer. We can imagine Tiffany will always remain more American than Bulgari. Bulgari is a more Asian company than Tiffany, which is increasingly more diamonds, while we are increasingly jewels and colors. We are very complementary — what works for Bulgari, not necessarily would work for Tiffany and vice versa,” continued Babin. “There is more complementarity than competition between the two brands, I think this is also one of the reasons for the acquisition.”

Integrating Bulgari into LVMH has given the group a much deeper knowledge of the market, and “seeing that it could grow very quickly and in a very profitable way surely created a certain appetite,” contended Babin.

Generally speaking, Babin said financial means are not enough to build a business. “You must also have a very clear, consistent strategy, stable in time, but tactically adaptable to the moment — because there are moments in which one must react and be faster than the others.”

He was also cautious about replicating success models. “There is no magic recipe — as in soccer, at times you put together a wonderful team and then after 10 years you are last in the championship for X or Y reasons, with the same amount of money, and you did not succeed in putting together a team that plays so well collectively.”

While investing in jewelry financially and in terms of human resources and creativity, expanding its assortment in stores, Babin also developed other categories, such as watches. “Our first priority was to expand our market share in jewelry, in particular in new geographies. Then we focused on women’s watches, followed by men’s watches as a third priority. We filled some gaps: we had steel or gold watches, but we did not have steel and gold watches, which is the number-one category in women’s watches.” He also added new watch groups, Lucea and Diva, to the existing Serpenti and Octo.

Bulgari, along with Tag Heuer, Hublot and Zenith, will hold the first LVMH Swiss Watch Manufactures Exhibition at Dubai’s Bulgari Hotel Jan. 13 to 15, unveiling to international media and retail partners the brands’ novelties for the year. The brands will attend Baselworld running April 30 to May 5, but, since the Salon International de la Haute Horlogerie in Geneva moved from January to April 25 to 29, the timing would be “very late to organize the commercial activities and the 2020 news” without this Dubai appointment. Given the gap in the calendar in January, Bulgari and the other companies opted for setting up their own event.

In terms of accessories, Bulgari has focused on evening bags, on the Serpenti sign, on colors and exotic hides, and on metals. “They are all really very distinctive and consistent with our jewelry,” the executive observed. “Everyone was offering more daily bags, but women like to have different bags when they go out at night, as they do a different dress and a different jewel. Following this logic, although we have different sizes, we aimed at bags that are quite small, precious and colorful. Our number-one color is green, which is a bit unusual and the second is red, which is even more so.” 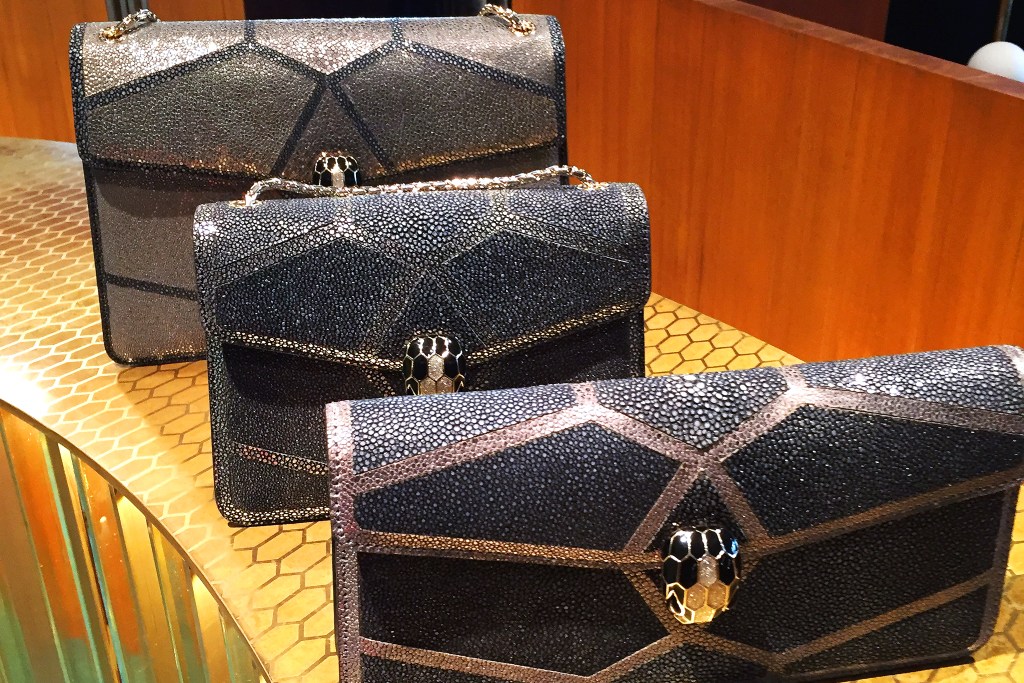 Bulgari’s operations have also been renovated. In 2017, the company inaugurated a 151,200-square-foot jewelry plant in Valenza, the historic jewelry hub located between Milan, Turin and Genoa. “This is already too small and it will be extended in the next few years, expanding the number of our employees to 1,300 from around 700,” said Bain.

In 2017, the company doubled the space of its high-jewelry atelier in Rome, but that location is also no longer enough to cover the demand and a new one is in the pipeline to double production. “In three years, we have doubled the number of high-jewelry pieces, so it is probably a business that can double in three or four years,” said Babin.

The production of watch components was previously spread between Le Sentier in Vallée de Joux for mechanical movements, Saignelégier for cases and bracelets, and La Chaux-de-Fonds for dials. “This is a very innovative concept, we combined different jobs under the same roof, improving efficiency so we have teams that are flexible,” said Babin.

Bulgari has also expanded the storied leather goods plant in Florence, bringing the cutting steps in-house. “This is more efficient because it allows us to choose the best parts to cut, with new machines that memorize the exact shape of the cut, reducing the hides in excess, which are reused to produce small leather goods. We are faster and more flexible this way,” said Babin.

Sales have more than doubled since the acquisition by LVMH in 2011, said Babin. Jewelry accounts for 65 percent of revenues, while watches represent 12 percent, followed by perfumes and accessories, representing 10 percent each. There is also a separate hotel business, which is solid and growing, he observed.

Bulgari’s next hotel will open in Paris on Avenue George V in the fall of 2020, with around 80 rooms, and “a mix of suites that will be the highest in Paris,” contended Babin; a starred Niko Romito restaurant, and “a unique beautiful rooftop with a panoramic view on the city.” Hotels in Moscow at the end of 2021 and Tokyo in 2022 will follow. Babin revealed there are three other projects in the pipeline, to be revealed in the next six months, but was mum on the details, except for saying that “one is already in construction.” 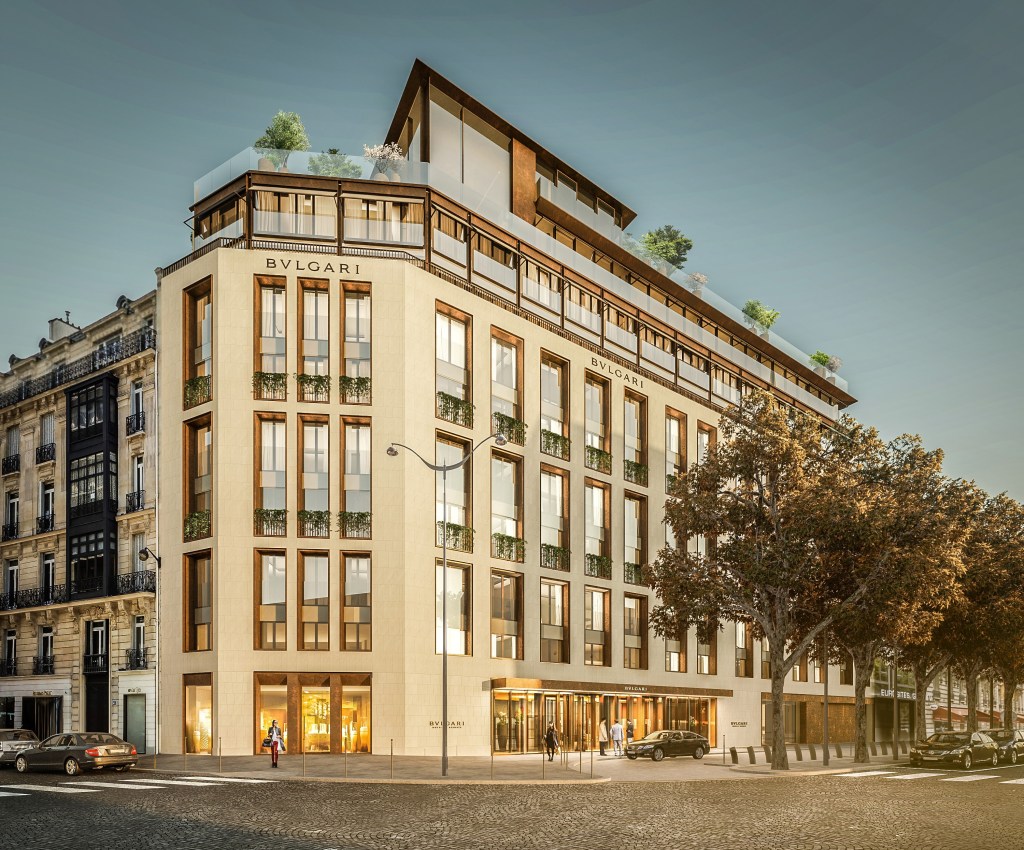 A rendering of the new Bulgari Hotel in Paris.  courtesy image

Babin has also spearheaded improvements in Bulgari’s distribution, renovating 150 stores out of 300, relocating and closing some when necessary. A new concept by Peter Marino mirrors the Roman essence of the brand bringing consistency to the architecture. Bulgari’s Rodeo Drive flagship will be renovated next year.

Coming up next is the expansion of the Place Vendôme store with a double entrance, which will open next year. The temporary store at the Champs Élysées that was damaged during the period of the gilets jaunes protests will become permanent with a different architecture during 2020.

In China there are plans for five or six openings next year. “The Chinese market is growing very quickly and so on the one end we must resize some stores to continue to guarantee a quality customer experience and also open in new cities,” said Babin.

He conceded all luxury brands are suffering in Hong Kong, dented by the social unrest there, as the stores are closed for a third of the time, especially during the weekends. “Nobody knows when the protests will die down and it will take time to recover the tourists’ confidence. The same happened in Paris, which has not entirely picked up from the impact of the gilets jaunes and is no longer the first tourist destination it was three years ago.”

In China, local spending is increasing, and the Chinese also shop in destinations ranging from Thailand and Singapore to Australia and Japan. Germany, Italy and Spain are also performing very well. “As a global brand, business lost in one city can be recovered somewhere else as customers travel,” he argued.