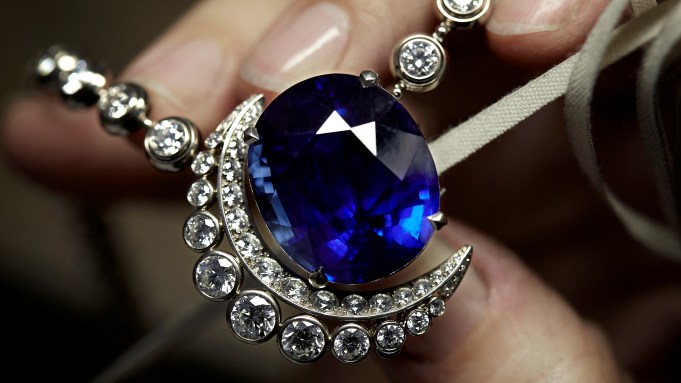 PARIS — If the universe started with a Big Bang, Chanel is kicking off 2022 with one too with the reveal of “Allure Céleste,” the masterpiece of an upcoming high jewelry collection celebrating the 90th anniversary of “Bijoux de Diamants,” the first — and only — high jewelry line designed by Gabrielle Chanel herself in 1932.

The house will reveal the full 81-piece “1932” collection in May, starting in Asia and culminating in Paris during July’s couture collections.

The starting point of the “Allure Céleste” design was its sizable central oval sapphire, purchased by the house in 2017 on the suggestion of jewelry creation studio director Patrice Legereau, who was struck by the 55.55-carat weight of the already-cut stone and earmarked it for the collection’s 90th anniversary.

Around the deep blue gem, Legereau designed a necklace that embodies the spirit of the “1932” anniversary collection. “I wanted to return to [its] essence and to harmonize the message around three symbols: the comet, the moon and the sun,” he said in a statement.

These celestial bodies were one of the major themes, alongside ribbons, feathers and fringes taken from her couture universe, of the original collection. In 1932, the London Diamond Corp. asked Gabrielle Chanel, by then world-famous for her couture and beauty signatures, to imagine a collection featuring their gemstones in a bid to revitalize its business, which was reeling from the Great Depression.

The “Allure Céleste” necklace, which required some 3,800 hours to make, features three motifs surrounded by radiant imprints. At the heart of the sun motif is an 8.05 carat Type IIa D FL pear-cut diamond, while the star has a 2.52-carat round-cut at its center, with another 40 carats tallied up by the 1,031 brilliant-cut diamonds of the design.

Thanks to invisible mechanisms, nodding to Gabrielle Chanel’s distaste for clasps, it can be transformed into a shorter version, three brooches and a bracelet.

“The idea of the movement is essential, so I’d describe them as a shooting star, rays of sunshine and the moon’s halo,” said Marianne Etchebarne, Chanel’s global head of watches and fine jewelry product marketing, clients and communication.

Beyond the stellar symbols, it’s the ideas that underpinned the house’s very first high jewelry designs that have been re-created in the collection, according to Etchebarne.

“Bijoux de Diamants is the founding act of high jewelry for Chanel, expressing the singular vision that she had on precious jewels and the woman who wears them,” she said, naming transferability and unfussy wear among them. “Her designs were imagined to be worn — appropriated — by women, so that they could live with them. It’s really about this idea of a jewel creating an allure, a style.”

That first collection was revealed on Nov. 5, 1932, to press and clients in what WWD in its Nov. 25, 1932, edition described as “an exhibit of great splendor, worthy of its setting among the Coromandel screens and gilded walls of Mademoiselle Chanel’s home in the Rue du Faubourg Saint Honoré,” along with a catalogue illustrated by photographs from future famed filmmaker Robert Bresson.

A manifesto signed by Gabrielle Chanel explained that while she’d favored costume jewelry “devoid of arrogance” in more affluent times, the financial crisis had brought out “a desire for authenticity.”

“If I have chosen diamonds, it is because they represent the greatest value in the smallest volume,” she wrote, concluding that she had used her taste to reconcile “adornment, elegance and fashion.”

Displayed on wax mannequins often used in millinery — the couturier’s first profession — and dressed in the latest fashions, the jewels were shown as precious accessories, finishing off a fur headband or jauntily holding a collar closed.

“She outmoded the idea of the matching set with this collection presented on mannequins so that women could project themselves into the allure they’d have with these pieces, which were mismatched,” Etchebarne said.

French film company Pathé called it “a Parisian event, an exhibition of jewelry and diamonds” in a newsreel broadcast in cinemas. The press raved about the inventiveness of these pieces, some of which were transformable, following the couturier’s statement that it was “because dresses change that my jewelry is transformable.”

By the end of the day, some pieces had already been sold. A public exhibition followed, its entrance fee of 20 French francs donated to charities supporting mothers and offering financial assistance to middle-class families impacted by the Depression.

The jewelry industry’s reaction was as violent as early reception was effervescent. Prominent Parisian jewelers stepped forward to decry the collection. The “Bijoux de Diamants” collection became known as the “Chanel Affair,” and the couturier found herself dragged to court, with a demand that she break apart her pieces and return the diamonds.

News clippings of the era also describe how an attempt to show in London was scuppered when British customs demanded 30,000 pounds (the equivalent of some $3 million in 2022) to allow the collection into the country, culminating with a debate in the House of Commons.

“At the time, it was heresy. I don’t think we fathom the uproar it caused or how shocking it was then that a woman — what’s more, a couturier who made costume jewelry — dared to touch real diamonds,” said Etchebarne, noting that these days, it was the outcry that felt out of step, given how collaborations are now par for the course in creation.

In the end, only two pieces are known to exist — a star-shaped brooch owned by the house and a feather one, currently in a private collection — creating an aura of mystery around the “Bijoux de Diamants” collection.

Painstaking work digging through the archives of still-extant publications for descriptions and sketches eventually turned up a collection of around 50 pieces, ranging from necklaces and earrings to head jewelry and a cigarette holder with a coral mouthpiece — to hide lipstick stains, of course. The film from Pathé was also found, in time for 2012’s 80th-anniversary celebration.

Ahead of this year’s 90th anniversary, discoveries included the fact that acclaimed French author Jean Cocteau had helped Gabrielle Chanel write the introductory manifesto, which was written in the first person and a further testament to her view of jewelry as an intimate object.