Chanel Launches High Jewelry Collection Based on No.5 Perfume

Chanel has launched a 123-piece collection of high jewelry based on the theme of the house's iconic No.5 perfume.

Chanel's 55.55-carat diamond necklace marks the centenary of the label's No.5 perfume.

PARIS — Chanel recently offered a peek at the teaser — a necklace that boasts a 55.55-carat diamond, cut in a shape reminiscent of its No.5 perfume bottle — and now the French luxury house is launching its entire 123-piece high jewelry collection, aimed at marking the centenary of the famous scent.

“This was the beginning of the collection,” said Patrice Leguéreau, director of Chanel’s jewelry creation studio, lifting a poster-size calligraphy painting of the numeral five in his office. “I did a lot of this, with the five, in ink — with this brush,” said Leguéreau, imitating the movement, in three broad strokes. “This helped me get into the story.”

The high jewelry houses lining the Place Vendôme have had to double down on finding fresh ways of relaying their brand stories without physical events since the pandemic hit, with many sending collections abroad for viewing, particularly in Asia. The No.5 collection features the 55.55 necklace as its centerpiece — which is destined for the brand archives, carrying the purpose of relaying a brand story and serving as a bridge between the creation of the No.5 perfume in 1921 and house founder Gabrielle Chanel’s one and only high jewelry collection called Bijoux de Diamants.

After rifling through a pile of paintings depicting the number five, Leguéreau pulled out a model of the 55.55 stone, which sat beside a model of the diamond’s original, uncarved state. 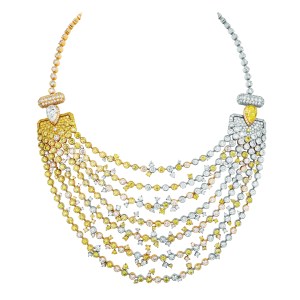 A necklace from the Chanel No. 5 collection  Courtesy of Chanel

“In the beginning the idea was to have a unique stone as the signature of the collection — without knowing what it would be like — and then there was the idea of drawing on an emerald cut, a square-shaped stone, to reflect the shape of the label on the perfume bottle,” Leguéreau explained.

The house didn’t necessarily seek out the largest stone, but rather one that would become the Chanel stone with a weight corresponding to the number five.

The necklace’s D flawless diamond is surrounded with 104 round diamonds and 42 baguette diamonds, redrawing the profile of the perfume bottle stopper and the bottle’s shape, before spilling into a cascade of pear-sharped diamonds, adding an abstract touch to the piece.

The designer took the symbolism of the number another step further, offering five themes to the collection, with pieces based on the perfume bottle’s stopper, the bottle, the shape of the number five, the flowers of the fragrance and the sillage. The sillage pieces include the “golden burst” necklace featuring imperial topazes and the “blushing sillage” sets with diamonds, rubies, garnets, yellow sapphires and spinels in pink and red. 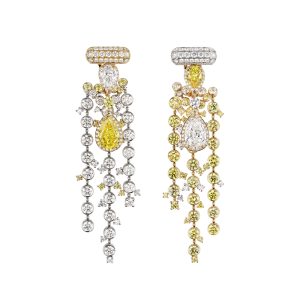 Earrings from Chanel’s No. 5 collection  Courtesy of Chanel

“I wanted to express the scent graphically and visually, the feeling and emotion,” said Leguéreau, noting he wore the perfume as part of his immersion into the subject.

“For me, it’s like an explosion, a burst — it’s solar, and carries heat,” he said, describing the scent and the feeling he sought to capture through his designs, which he expressed through yellow stones and splayed out designs.