PARIS — As far as luxury flagship spruce-ups go, this is another biggie for the Place Vendôme: Chaumet.

Timed for the label’s 240th anniversary, the refurbishment is a display of French luxury, showcasing tiaras from all eras, infused with gold and sunray patterns — down to the carpeting — and sprinkled with references to Empress Josephine, including her statue.

“You need to have a truly emblematic place because today, sure, there are digital and virtual worlds, but in our realm, and in jewelry in particular, you need something solid, to touch, to see — we need to be able to interact, because the craft of jewelry is based on sharing,” said Jean-Marc Mansvelt, chief executive officer of the historic house, which belongs to LVMH Moët Hennessy Louis Vuitton.

“When it comes to the virtual world, there’s no secret — jewelry is the domain that’s the least developed in e-commerce,” he added. 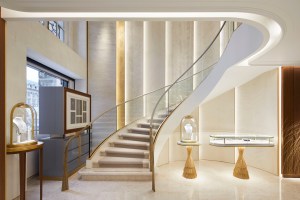 The high jewelry business has nonetheless felt the impact of the rise of digital commerce, which has spurred luxury houses to build more extravagant showcases of their physical spaces meant to both embody the spirit of a label and stand out in a crowded field.

While the jewelry house once sat at number 15 — which is now the Ritz — Chaumet traces the origins of its boutique at number 12 to 1907. At the time, it housed a boutique, a workshop and photo studio to document its jewelry pieces.

Today, the Baudard de Saint-James mansion — named after its original 18th-century owner — houses a refurbished boutique stretching over two stories, including the ground level. The historic salons sit on the floor above the boutique, their tall ceilings affording a broad view of the spiraled column. The next floor up has been transformed from offices into sparse workshops, populated by artisans in white smocks.

“It wasn’t optimal before — the workshops were at the back of the courtyard — limited in capacity whereas we have more and more jewelry orders, and special orders,” Mansvelt said. Even the floor harboring the grand salons harbored unused space, he noted.

“We have rethought the entire mansion so that everything serves the narrative,” he added. Even the courtyard will have a new purpose, serving as garden space in the summer. 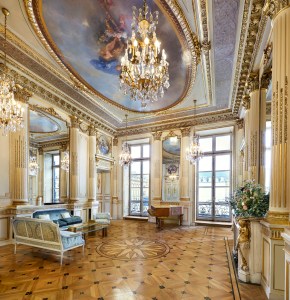 Heavy, structural work on the nearly three centuries-old building was mostly avoided, so as to preserve the grand salons, including the Chopin salon — Frédéric Chopin famously died in the mansion.

But selling space in the boutique was extended by adding a new floor.

“It was a spectacular space, but rather intimidating, in my point of view,” explained Mansvelt, referring to the previous set-up, which had resulted from a revamp in 2004.

Reflecting his vision of the house as more intimate and less showy, the new floor unfolds as a series of spaces, including nooks created with open bookshelves and sofas, and private salons — one for brides and the other outfitted with a display hidden behind sliding doors for unveiling custom pieces. Before, the store did not have private spaces, Mansvelt noted.

“We created a series of different spaces and experiences,” he said.

Below, on the ground level, glass covered jewelry displays serve to draw people into the store, sitting on pedestals fashioned to look like bundles of wheat stalks. The work of modern craftsmen is spread throughout the store, with materials like alabaster, straw marquetry and vegetation sculpted in bas-relief. For clients getting a watch fixed, a cozy waiting room with a bar is decorated with photos of the jewelry-making process. 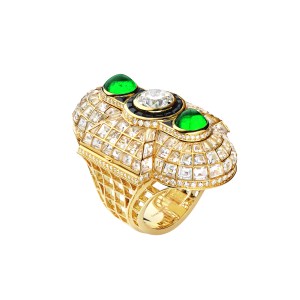 To celebrate the refurbishment, the house has made a series of rings — unique pieces — that represent architectural styles of different regions of the world, including a rendition of the Grand Palais in Paris. For a more affordable option, the Legende medallions are stamped with various house motifs, including a laurel leaf, a J for Josephine and a tiara, encrusted with jewels.

On the upper floors with the historic salons, one has been transformed into a large dining hall, the carved historic wood panels were stained in the house blue. The tiara exhibit room is covered from floor to ceiling with intricate models, while another room to the side offers exhibit space, where the house can show pieces alongside their historic archival photos. 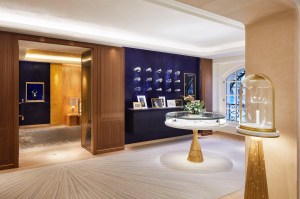 Mansfelt offers a stoic view of the current disruptions to business from the coronavirus epidemic, which has prompted store closures for the brand in mainland China — Chinese consumers account for a large proportion of business for the jeweler.

“I’ve been working for 35 years, and have already lived through crises — SARS, the financial crisis…I think the most important thing today is to adapt — you have to take the context into account but also save your strength and resources for the day when things pick up again — because they will pick up again, today we just don’t know when exactly,” he said. He stressed the importance of staying calm and keeping medium and long-term objectives in mind. “There’s no point in getting agitated and jumping all over the place.”