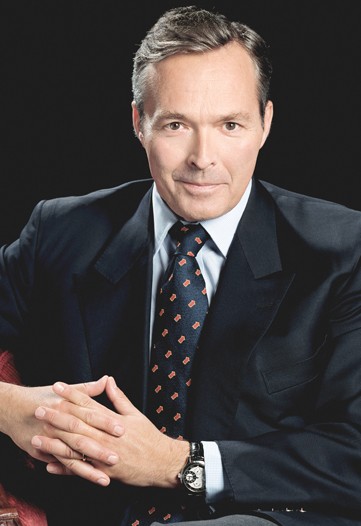 On a rainy Sunday earlier this month, as the glamorous Oscar nominees got coiffed, coddled and nerve-racked over winning or losing in front of 40 million-plus TV viewers and an audience of their peers, Caroline Gruosi-Scheufele remained cool and collected.

Gruosi-Scheufele, Chopard co-president and longtime film buff, who has helped catapult her family’s privately held 150-year-old company by bolstering its red-carpet rank, was in Los Angeles to attend friend Elton John’s Academy Awards viewing party to benefit the singer’s AIDS foundation. She was also out West to support the actors and actresses with whom she has built relationships since they began making films in hopes of bejeweling the winners for their big moments in the spotlight. In the last several years, Marion Cotillard, Penélope Cruz, Rachel Weisz, Charlize Theron, Hilary Swank and Kate Winslet all wore Chopard jewelry for their golden statue wins.

“It’s always a moment of suspense,” said Gruosi-Scheufele. “We follow careers for years.”

While industry sources have said that Chopard strikes deals with prime actresses so they will wear its jewels for important occasions, Gruosi-Scheufele said the marquee celebrities’ decisions are a reciprocation of the firm’s support throughout the years.

The trip to Hollywood from Geneva, where Gruosi-Scheufele and her family’s firm is based, was considered successful. The actress Mo’Nique snatched a statue for best supporting actress, outfitted in nearly 100 carats of Chopard diamonds from neck to wrist. The company’s barrage of press releases post-win tout its jewels as a “lucky charm” and perhaps there is a bit of magic in the making.

Chopard is run by Gruosi-Scheufele and her brother Karl-Friedrich Scheufele, who is co-president. The Scheufeles’ grandfather, Karl Scheufele 2nd, a third-generation watchmaker, acquired Chopard in 1963 from Paul Andre Chopard, a descendant of the firm’s founder, Louis-Ulysse Chopard, who launched his company in the mountains of Swiss Jura and counted royals such as Tsar Nicolas II as clients. The Scheufeles planned to create a worldwide luxury watch brand.

It is under the Scheufele dynasty that Chopard flourished to become widely known for expert and dynamic watches under Karl-Friedrich’s oversight, and innovative high jewelry, of particular affinity to his sister, Caroline.

The company now reports to have sales of about $750 million Swiss francs, or about $706.2 million at current exchange. Chopard has 123 stores around the globe, both company-owned and franchises in locales such as Geneva, Moscow, Dubai, Beverly Hills, Munich and London. There is also wholesale distribution in stores such as Saks Fifth Avenue, Wempe and Mitsukoshi in Paris.

Scheufele said the firm has grown significantly in Asia, with strong sales in Hong Kong and Mainland China. The firm is growing its Japanese presence after opening a subsidiary there in 2008. There are also plans to move into India more aggressively, as the brand has only two franchised shops in the country.

Sales in Eastern European countries such as Russia and surrounding nations have lagged of late, but Scheufele believes the upturn has begun and sales in the region will bounce back eventually. The recession has caused a bit of a fall off in the U.S., but Scheufele contends it is still one of Chopard’s most significant markets and said there are plans to open two more boutiques in the West and Midwest in the next couple of years.

One of Chopard’s innovations is the Happy Diamonds watch and jewelry collection in which bezel-set diamonds “float” freely between the watch dial and sapphire crystal or within pendants in the shapes of hearts, clowns and elephants. The first Happy Diamonds piece was unveiled in 1976.

The watch end of the business is underscored by Karl-Friedrich, who discovered his passion for the family business as a child growing up in and around watch factories.

“Today, watchmaking is my passion,” said Scheufele, who moved from Germany to Geneva as a young man to study the craft, as his father and grandfathers did.

Karl-Friedrich’s passion for car racing led him to develop one of the company’s most popular and memorable watch designs called Mille Miglia. Developed in 1988, the line is based on the famous Italian classic car race of the same name. The watches have a distinctive rubber strap embossed with a pattern resembling a tire tread with a case juxtaposed with elegant lines, chronographs and complications. The executive and his father have raced themselves and the younger has taken part in every Mille Miglia since 1988 in rare cars such as a 1955 Ferrari Monza 750. The company is an event sponsor.

One of the key facets that enables Chopard to test out novel designs in watches and jewelry is that in 1996, the firm vertically integrated itself by opening a watch manufacturing company in Fleurier, in the Swiss Jura dedicated to the production of mechanical L.U.C. movements in 1996.

Caroline, on the other hand, is a trained gemologist and has a passion for stones coupled with whimsical designs. She recalled drawing what would be Chopard’s seminal jewelry piece, a clown, in grade school.

When she wanted to introduce Chopard jewelry, Gruosi-Scheufele told her father, chairman Karl Scheufele 3rd, “a woman will buy one watch, but she will buy three pairs of earrings.”

Other revolutionary designs that caused a stir in the industry include the Ice Cube collection, which consist of cubes of diamonds, nearly invisibly set into metal.

Since then, Gruosi-Scheufele has made a significant push into high jewelry, the one-of-a-kind pieces suitable for the red carpet, but also rich clients looking to spend their dollars, yen or euros on something distinctive, collectible and rare.

Gruosi-Scheufele has also taken to working with various filmmakers and costume designers to create gems for films such as “Elizabeth, the Golden Age,” as well as 2009’s star-studded “Nine,” in which a suite of jewels were developed for each of the five protagonists, including Nicole Kidman and Kate Hudson.

“In the present state of the industry, you have to be extremely persevering,” said Scheufele. “You have to be patient and you have to have an excellent team…you cannot cut corners.”

In honor of Chopard’s 150th anniversary, animal lover Gruosi-Scheufele found inspiration in nature to create the Animal Planet collection of fine jewelry. One hundred fifty pieces of haute joallerie, ranging from a collar of cognac diamond-covered monkeys perched on a gem-studded vine necklace, a turtle ring with a movable head and an 11.43-carat pear-cut brown diamond.

Other animals that have been immortalized with sapphires, diamonds, rubies and emeralds, as well as less traditional gemstones like kunzite, Paraiba tourmaline and moonstones, include a hippopotamus, a sea horse and a koala. The pieces are labor intensive, such as the Cascading Clown Fish Necklace that took a cadre of designers, sculptors, founders, stones setters and polishers a combined 750 hours to produce with no fewer than 2,160 individually set stones. It is the largest and most comprehensive high jewelry collection from Chopard and includes watches, as well.

The line will bow at Baselworld, but will have an official launch in New York in April with a celebrity-studded event at the Frick Collection. After that event, the collection will travel to events at Chopard boutiques the world over until the end of the year, when consumers can actually take hold of the pieces they buy. There will also be an anniversary party during the Cannes Film Festival in France in May. Prices range from $50,000 into the millions of dollars.

For his part on the watch side, Karl-Friedrich created the L.U.C. Louis Ulysse tribute watch in homage to Chopard’s founder. The white gold timepiece is inspired by a pocket watch and can be transformed into a wristwatch by unfastening the lug from the strap. The system, with a hand-wound movement that oscillates at a cadence of 21,600 vibrations and has an 80-hour power reserve, was developed by Karl Scheufele 1st in 1912. The watch, along with three other styles made in collaboration with the Geneva Watchmaking School, including the L.U.C. Engine One Tourbillon that has a dial inspired by the world of automotives, will debut at Baselworld, and will be produced in a limited edition of 150 pieces.

“We don’t want to double our production…it’s more than doubling sales in 10 years,” said Karl-Friedrich of the firm’s goals. “We want to focus on excellent service. We want to remain passionate about what we do, to continue to build and to, with some audacity, surprise our customers.”