The jeweler debuted a bigger, revamped space on Bond Street and a new "Happy Hearts" collection with Natalia Vodianova.

LONDON — Chopard is reaffirming its presence in London with a new Bond Street space and a slew of events to celebrate.

“Exit, Brexit, no matter what happens, London will always be London. It has historically been a great market for us because it’s so international. Regardless of race and ethnicity you get clients from the Middle East, Russia, Kazakhstan based here, also because of the schools,” said Caroline Scheufele, co-president and artistic director of Chopard.

That’s why the company jumped at the chance to increase the size of its Bond Street flagship, when the government granted them permission to build into the courtyard, gradually expanding from its first compact space in the British capital, opened more than 40 years ago.

“We used to call the very first boutique a chocolate box in 1997, because it was so tiny,” added Scheufele, who was in town to host an opening party with the likes of Julianne Moore, Alexa Chung and Marion Cotillard, followed by a luncheon with Natalia Vodianova to celebrate the model’s new collaboration with the jeweler.

There’s also a new design concept to mark the store opening, produced entirely in-house as a collaboration between Scheufele and her brother Karl-Friedrich Scheufele.

“Rather than going into a shop, we wanted it to be like stepping into somebody’s house,” said Scheufele.

She added that the store is also designed to highlight “the different universes of Chopard,” starting with the ground floor, which features neutral wooden features and core jewelry and watch ranges, as well as a range of recently launched handbags designed with Chloë Sevigny. The lower ground floor is dedicated to the jeweler’s men’s offering and is designed to resemble a gentleman’s club with dark wooden floors, a bar and antique cars dotted around, while the first floor, which houses the red carpet, fine-jewelry ranges, was transformed by Scheufele into a chic boudoir complete with floral wallpapers, pink-hued walls and a striking table made up of a rough amethyst. 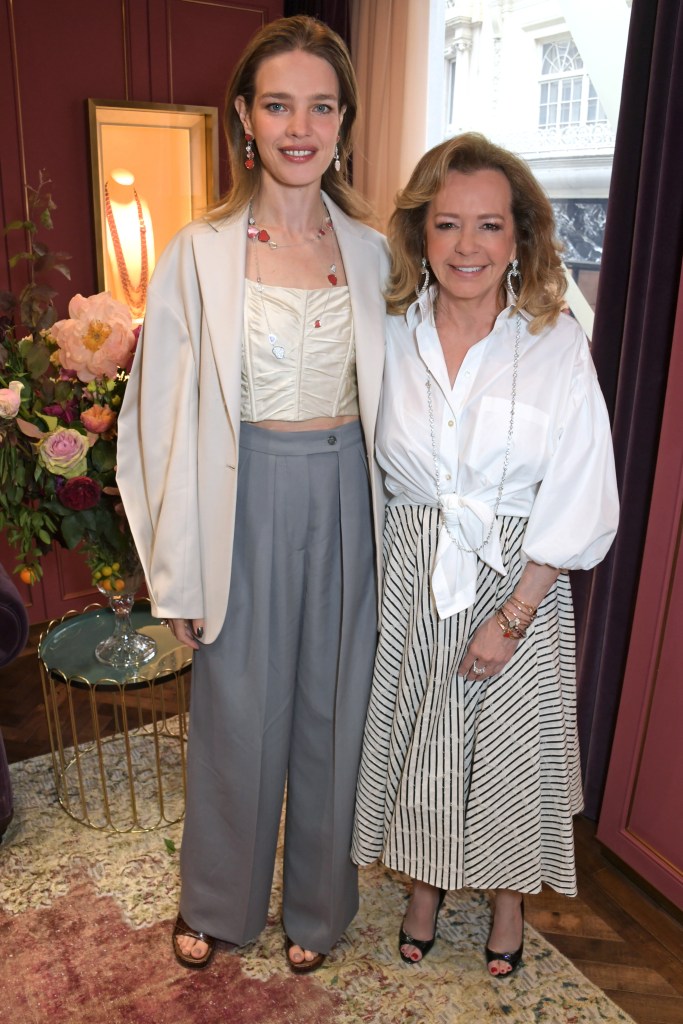 “Amethyst has a lot of positive energy. I spoke to a feng shui healer who told me I should have amethyst in my home and then we found this rough amethyst, I thought we just had to buy it. We had it in our space during the Cannes Film Festival and it brought us a lot of luck and we then brought it to London, hoping it will do the same,” Scheufele added.

The floors are also made of repurposed wood in keeping with the brand’s ambitious sustainability efforts, which also included the rolling out of an eco-friendly blue carpet made using regenerated nylon at the store’s opening party.

The brand’s next goal is to focus on the sourcing of all its stones:

“We want to make sure we know exactly where the stones are sourced from and that it’s done ethically; it is something we are trying to achieve. That’s why we work a lot with Gemfields for semiprecious stones,” said Scheufele. “When we started with our first fair-mined gold in Colombia, we only had 80 kilograms of it. Now everything is made with ethical, fair-mined or recycled gold. Our fragrances are also fair-harvested without any chemicals and also our gemstones, packaging and furniture is a part of that. You cannot change everything in one day, but we do everything we can.”

To coincide with the opening, the jeweler also debuted a new “Happy Hearts” collaboration with Vodianova to benefit her Naked Heart Foundation. It celebrated with a casual in-store lunch where clients and friends of the brand discovered the new collection of dainty bangles and necklaces featuring rose-hued stones and snapped pictures with Scheufele and the model.

“It’s important to join forces with other women and there are so many important projects you can support. Natalia is concentrating on Russia, while Petra [Nemcova, another friend of the house] has been working to build schools in places hit by natural disasters, given her background of losing her fiancé in a tsunami. Just with the bangle we collaborated on, we’ve already managed to build multiple schools together.”