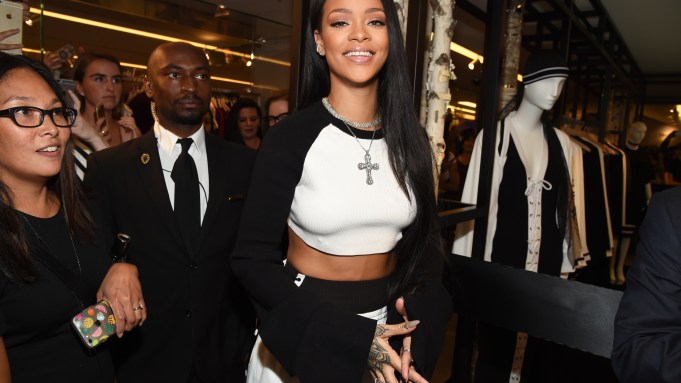 PARIS — Rihanna is set to bring her edgy Midas touch to Chopard, with a high jewelry collection codesigned with Chopard copresident and creative director Caroline Scheufele set to bow at the Cannes Film Festival in May.

Dubbed Rihanna Loves Chopard, the collection consists of one-of-a-kind creations inspired by the singer’s island roots mixing nods to the lush gardens of Barbados with the electricity of Carnival, as well as new takes on house icons.

A nine-piece fine jewelry capsule also codesigned by the singer, and limited to 2,000 per design, will enter Chopard boutiques internationally in June. Offering a more minimalist, graphic direction, the line will be available for pre-order in Chopard boutiques and on the brand’s web site.

An advertising campaign showing the “Diamonds” star in creations from the fine jewelry line will launch in a range of luxury U.S. titles this month before rolling out internationally.

Crafted from ethical 18-karat Fairmined-certified rose gold, the line reinterprets Chopard’s signature Ice Cube shape, and features ceramic — a first for Chopard — in a shade of jungle green personally picked by the star. The gold cubes are available in frosty polished or diamond-set versions.

“Rihanna and I collaborated closely on the collections, so you can feel her unstoppable energy, strong creativity and inherent sense of design in every piece,” Scheufele said. “With her unique style, she redefines the way people see and wear jewelry.”

At the Grammy Awards, the singer sported a one-of-a-kind pair of floral-inspired multicolored chandelier earrings and a marquise-cut diamond solitaire ring, while on the March cover of Harper’s Bazaar, she wore a pair of transformable diamond earrings.

The Barbadian beauty is expected to hit the Cannes Film Festival, which will be marking its 70th edition, in the first week — and possibly even for the opening ceremony on May 17 for Luc Besson’s “Valerian and the City of a Thousand Planets,” in which she costars alongside Cara Delevingne, rumored to be a contender for the opening-night film.

Marking the first time a piece featuring colored precious stones were included in the Green Carpet Collection, the capsule was part of Chopard’s ongoing Journey to Sustainable Luxury initiative, launched in 2013 in partnership with Eco-Age, the consultancy headed by Livia Firth, wife of the British actor Colin Firth.

Marion Cotillard was the first actress to wear items from the Green Carpet Collection on the red carpet at the Cannes Film Festival in 2013. In 2015, she worked with Chopard on designing the first jewels using ethically sourced colored gemstones.

Rihanna’s high-profile collaborations include the Fenty Puma by Rihanna collection, part of her ongoing role as the sports brand’s women’s creative director.

The singer in 2016 also designed a range of futuristic sunglasses in collaboration with Dior as part of her brand ambassadorship, and collaborated on two capsule footwear collections for Manolo Blahnik. In 2015, she signed a three-year deal as contributing creative director of Stance socks.

Are Rihanna and Chopard Heading for a Collaboration? >>

Rihanna Shuts Down Debate Chatter With Political Statement of Her Own >>