China's largest jeweler will auction the pieces targeting VIP shoppers in May. 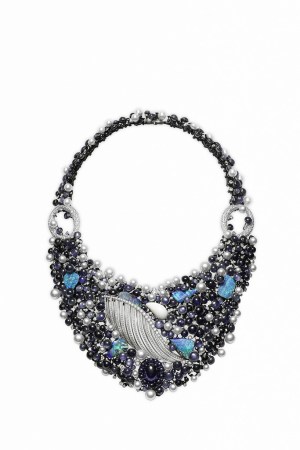 China’s largest jeweler kicked off its first champagne-fueled VIP shopping event of the year with a Milan-themed fashion show Friday night at the Grand Hyatt hotel. The collection will make two more stops in Suzhou and Xi’an, before the jeweler auctions off the goods in May.

The collection of 140 special pieces featured lots of colored precious stones, a new area of focus for the company that is best known for its gold products. Precious stones have higher profit margins and are also seeing more fast-growing sales by younger and more affluent customers.

“There’s more demand in precious stones. Our clients are getting younger and they are more sophisticated. So they want something more art couture and something very different and unique. So the design and craftsmanship and use of precious metals are changing,” Adrian Cheng, executive director at Chow Tai Fook Jewellery and a member of the family that controls the company.

Cheng said the special collection, designed in-house, strives to integrate romance with wilderness. Some of the necklaces feature clusters of precious stones such as opals, tourmaline, diamonds integrated with more traditional materials such as jade or gold in intricate patterns.

Chow Tai Fook will be flying in its top echelon of VIP customers from southern, northern and eastern China to Suzhou and top customers from western and central China to Xi’an to view the collection, explained Alan Chan, Chow Tai Fook Jewellery’s director of group branding. The jeweler will also be flying in some of its best VIP customers to Paris during the city’s fashion week for “cultural exchange” events bringing together fashion designers, jewelry, and artists to showcase the latest trends from China to international media and buyers.

Chow Tai Fook has been revamping its VIP program to better cater to its most affluent customers. VIP sales now account for about 30 percent of overall revenue, but are expected to grow to 40 to 50 percent within a few years.

The company doubled the entry-level threshold to VIP status to 200,000 Hong Kong dollars, or $25,786 at current exchange, worth of purchases in a year and will roll out a revamped program in mainland China later this year. The company says it now has 1 million VIP customers in China. Customers are divided into three echelons; the top group spends at least 1 million Hong Kong dollars, or $128,394, a year.

Chow Tai Fook held first VIP auction in 2011 in Beijing and held one last year in Hong Kong. Last year’s auction was a big success, said Chan, noting that the company sold out all of 19 pieces. The highest bid was for 7 million Hong Kong dollars, or $902,900 at current exchange rates, for a diamond necklace.

The company expects attendance of about 100 to 200 at each event. In addition to Chow Tai Fook’s VIP customers, there will also be wealthy clients from affiliated companies such as New World Development, a Cheng family-controlled property and mall developer, as well as Ferrari and Red Valentino. The Cheng family owns companies that distribute the two brands in parts of China.