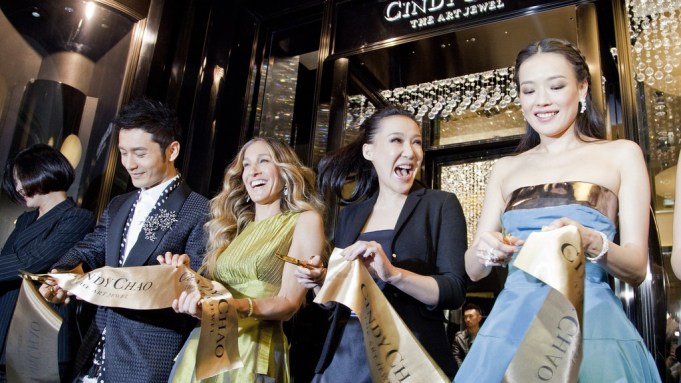 BEIJING — Jewel artisan Cindy Chao has marked a major milestone for her brand by opening her first stand-alone gallery and boutique in an exclusive shopping arcade here.

The moment caps off an exciting month for the young designer, coming within weeks of her 2009 Royal Butterfly — a 2,328-gem creation featuring sapphires, rubies and diamonds weighing 77 carats — being inducted into the Smithsonian’s Hall of Gems, making her the first Taiwanese designer featured there.

Four more of her butterflies, which she has released annually since establishing Cindy Chao The Art Jewel in 2004, were on display at a grand opening and ribbon cutting at the Park Hyatt Beijing, featuring Sarah Jessica Parker, Taiwanese film star Shu Qi and Chinese heartthrob Huang Xiaoming.

“The collectors here really appreciate my work. I never thought about opening a retail, public boutique such as this store anywhere. But they really impressed me and they really encouraged me,” Chao told WWD. “To me, each of these pieces is like a miniature art piece, a sculpture. So if I can make my store an art gallery instead of just a fine jewelry store, I think it will be very meaningful, and we will be able to educate the buyers and collectors in China that jewelry can be viewed in this different way.”

The shop is an intimate, 860-square-foot gallery reminiscent of her black-lacquered jewelry boxes, which took 16 months to construct and more than two years of preparations and delays.

The boutique will feature Chao’s White Label collection, her entry-level line found at Bergdorf Goodman in New York. But on Sunday, its eight display cases included some of Chao’s most opulent Black Label Masterpieces, many borrowed from private collectors. The most valuable piece is the Amazona Columbia diamond and emerald necklace in 18-karat gold — never before shown in an exhibition and which took four-and-a-half years to create — which contains nearly 100 carats of emeralds and 120 carats of diamonds, and is worth $10 million.

This is Chao’s third exhibition in Beijing; a temporary exhibition two years ago was also opened by Parker, who said she was excited to make the return trip.

“I really love this country, and it’s inexplicable, it’s not as if I grew up knowing a huge amount about it, but I’ve always had a huge fascination with it and I always very much wanted to come back. What’s wonderful about it is I have met, and have come to know a little bit, Cindy, and have been so enchanted by her,” said the actress, who selected a series of multicolored branch bangles from Chao’s Four Seasons collection for the opening to go with her vintage gown, along with feather earrings in yellow diamonds and pink sapphire.

“She is someone with incredible talent and discipline and skill, and she sees jewelry and gemstones in a way that other people don’t,” said Parker. “I’m so happy for today. I know it’s been a lot of work to get here, and I’m very proud of her.”

Chao founded the label nine years ago in her Taipei studio and still maintains her home base there. Each piece — she produces no more than 36 of her Black Label creations in a year, in addition to the White Label line — is first sculpted in wax, then sent to Europe for final production.

Among her fans are Katie Holmes, Queen Rania of Jordan and Salma Hayek, who sported a maple-leaf choker from the Four Seasons collection as a headpiece at this year’s Oscars.