The 15th annual event will be held in New York tonight, with honorees ranging from Tourneau and Haskell to Philip Treacy and Robert Marc.

By Rachel Strugatz and Alexandra Steigrad on November 7, 2011
View Slideshow 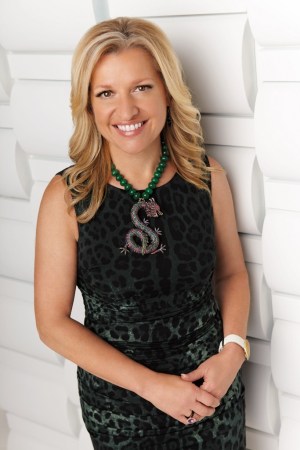 When Mindy Grossman joined HSN as chief executive officer in 2006, she saw an opening to revitalize the brand through fashion. A 34-year retail veteran who has held top jobs at Nike, Ralph Lauren, Tommy Hilfiger and Oxford Industries, Grossman led the relaunch of HSN in August 2007, incorporating a lifestyle element.

“We looked at a lifestyle focus on how we could work with a brand,” she said. “We’re lucky because we’re not locked into real estate.”

“The customer is really looking at contemporary looks at price points she can absorb but it really comes down to product,” Grossman said. “We’ve been very focused on story telling. We’re engaging the customers we had but we are also attracting new consumers.

According to the company, HSN.com is a top-ten most trafficked e-commerce site and accounts for more than 30 percent of HSN’s $3 billion in total revenues.

Robert Marc opened his first store more than 25 years ago — and now his eyewear is found in more than 22 countries, including France, Italy, Germany, the Netherlands and Japan. The brand has seen significant growth over the past year, and in addition to a newly renovated flagship on Madison Avenue has plans to roll out its new retail concept to an additional eight stores in 2012. Marc said the turning point for the brand came with the introduction of his wholesale business, as this changed the company from a New York brand to a global company. “The Robert Marc customer is a modern man or woman with strong independent style who knows and appreciates quality, authenticity and craftsmanship,” Marc said.

NEXT: MAGAZINE OF THE YEAR >>

MAGAZINE OF THE YEAR: MARIE CLAIRE

Since taking the helm at Marie Claire, editor in chief Joanna Coles has extended the brand by upping its visibility via television appearances and digital marketing efforts. “Marie Claire is very much a woman’s magazine. Our fashion is done by women for women,” she said. “We’ve really built up our accessories coverage over the last five years because our readers tell us that accessories are the easiest way to update their wardrobes.”

Coles, fashion director Nina Garcia, and the rest of the editorial team cull through countless handbags, jewelry, watches and shoes to find products that match the lifestyles of the magazine’s readers.

“We have very wealthy readers and readers who are just starting out in their careers,” Coles said. “We’ve really spent a lot of time thinking about a bag. It has to go with your life…especially for women in the city — it’s equivalent to a car. It’s very emotional.”

Kate Betts has been chronicling the world of fashion for 20 years. A contributing editor at Time and author of the recent book “Everyday Icon: Michelle Obama and the Power of Style,” Betts is the youngest person ever to serve as editor in chief of Harper’s Bazaar and her résumé also includes stints as fashion news director at Vogue and as a member of the Paris bureau of Women’s Wear Daily.

With such a background it may come as a surprise that today’s award, which will be presented by her longtime friend Christian Louboutin, will be her first.

Betts is currently working on an autobiography that she refers to as a “coming-of-age story,” but has the same drive no matter what she’s writing about. “I’ve always considered myself a journalist and I’ve always approached fashion as a reporter,” she said.

NEXT: DESIGNER OF THE YEAR >>

DESIGNER OF THE YEAR: PHILIP TREACY

It’s been a big year for millinery, due in part to Philip Treacy.

The designer helped ignite a renewed interest in the accessories category earlier this year when more than 30 of his custom-made toppers were worn by guests at the wedding of Catherine Middleton to Prince William in April, including Princess Diana’s nieces — Lady Amelia, Lady Eliza and Lady Kitty Spencer — as well as Princesses Beatrice and Eugenie and Victoria and David Beckham.

The 41-year-old Treacy started making hats for Karl Lagerfeld at Chanel when he was just 23 and then launched his own line as well as designing hats for the likes of Alexander McQueen, Ralph Lauren and Donna Karan. Treacy has won the British Council’s award for Designer of the Year five times since 1991.

NEXT: ACCESSORY BRAND LAUNCH OF THE YEAR >>

Georgina Chapman and Keren Craig have managed to create a collection of handbags that complements their red carpet fare. The two maintain that while they don’t have to worry about fit when designing accessories, they love the challenge of working with a new medium. “Our personal love of romantic and feminine yet eclectic pieces has, of course, helped shape the overall aesthetic of the brand,” Chapman said. “Our ideal situation would be to be able to dress a woman in Marchesa head to toe. For us that would really be the ultimate accomplishment.”

All handbags include a signature rock crystal clasp or turn lock bordered with inlaid crystals, and materials are comprised of exotic skins, pony hair, intricate bugle and mother-of-pearl beading, hand-embroidered lace, feathers and lace appliqués. The design duo are also keen to have the linings of their bags mirror the lining of their dresses, and many of the clutches contain corset-style detailing.

Rebecca Minkoff has been on an expansion kick. With the goal of achieving lifestyle-brand status, the six-year-old company has branched out from its foundation in handbags to footwear and apparel.

Growing demand for its wares also spurred the company to develop jewelry, eyewear, cold-weather gear and scarves — all set to launch in 2012 — and it recently inked a three-year deal to expand in Asia. The firm will open its first 3,000-square-foot flagship in Tokyo next spring, as well as two additional stores and 15 shop-in-shops in mall stores.

“It’s a real honor to be receiving this award. I’m truly touched to be recognized for my work in accessories which launched my career and is the basis for my company that is quickly becoming a lifestyle brand,” said company founder and designer Rebecca Minkoff.

Temple St. Clair Carr founded her namesake collection while living in Florence in 1986, and today, the New York City-based brand is carried at more than 100 retailers worldwide. Known for her craftsmanship with gold and colored gemstones, Claire Carr said that it was a partnership with Tiffany & Co. from 2002 to 2005 that really put the brand on the map. When asked how her work has evolved in the past 25 years, the designer said she delves deeper into cultural and worldly themes while researching future collections. “The content of my seasonal collections has broadened considerably,” she said, adding that she now creates one-of-a-kind pieces with rare, collectable stones, calling the work of her goldsmiths “more refined than ever.”

NEXT: INFLUENCER OF THE YEAR >>

INFLUENCER OF THE YEAR: NICOLE RICHIE

She’s come a long way from her days of palling around with Paris Hilton on “The Simple Life.” This year, the mother of two introduced handbags to her growing lifestyle collection, House of Harlow 1960, which already included jewelry, shoes, sunglasses and apparel. Her vision is to create pieces that are a combination of casual and luxe — much like her own personal style. Here, Richie talks about how her style has evolved since she first burst on the scene in 2003.

FOR AN EXTENDED INTERVIEW WITH NICOLE RICHIE, CLICK HERE >>

Tourneau, the 111-year-old specialty timepiece retailer, began to implement an overhaul of its image following the appointment of James Seuss as chief executive officer in March 2010. Last July, Tourneau opened a new concept store — a 3,135-square-foot flagship on Madison Avenue in New York that introduced the idea of “counterless” selling for its selection of watches from more than 40 brands that include Baume & Mercier, Rolex, Blancpain, Cartier, Chanel, Franck Muller, Harry Winston, Hublot, Jaeger-LeCoultre and Vacheron Constantin. And Seuss, whose résumé includes stints at Tiffany, Stella McCartney, Harry Winston and Cole Haan, has even more plans up his sleeve. Below, he details the retailer’s new concept, as well as plans to introduce a collection of entirely customizable timepieces.

FOR AN EXTENDED INTERVIEW WITH TOURNEAU’S JAMES SEUSS, CLICK HERE >>

Haskell Jewels is one of the leading costume jewelry designers and manufacturers in the U.S. with licenses that include Kenneth Cole and Betsey Johnson — and the company also owns costume jewelry firm Miriam Haskell and recently acquired Robert Lee Morris. That stable of brands makes Haskell one of the largest vendors to Macy’s, J.C. Penney, Kohl’s and Dillard’s. Below, owner and chief executive officer Frank Fialkoff talks to WWD about the past two decades and how he turned Miriam Haskell from a $200,000 business into a group that now has estimated sales of $150 million.

FOR AN EXTENDED INTERVIEW WITH HASKELL’S FRANK FIALKOFF, CLICK HERE >>