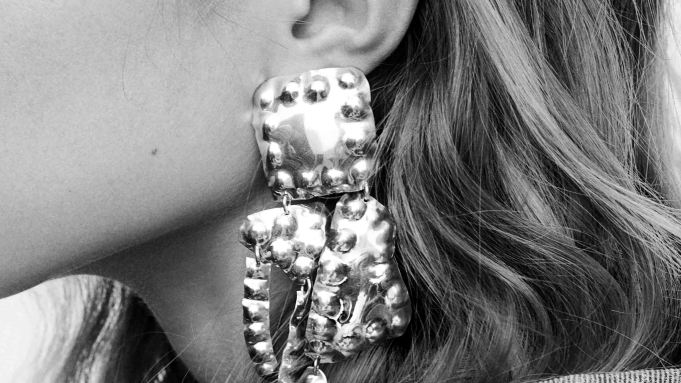 Copenhagen-based jeweler Jo Riis-Hansen has established herself in the past year as a go-to resource for sculptural, feminine jewelry that bridges the worlds of art and fashion. Now her designs are becoming a bit more accessible.

Riis Hansen’s signature pieces — hand-hewn from gold, diamonds, pearls and opal — have attracted an impressive list of clientele including Glossier’s Emily Weiss and Danish mega influencer Pernille Teisbaek. The mobile-like earrings for which she is best known run from about $2,000 to $6,650 per piece.

Now the designer is introducing a range of sterling silver earrings, to be priced from $370 to $600 each. Due to their exaggerated shape and size, Copenhagen women-about-town such as Rotate create director Jeanette Madsen have been seen wearing only one at a time, paired with a smaller earring on their opposite lobe. Riis-Hansen said her sterling line will soon grow to include necklaces and bracelets.

The designer sells her jewelry through the Copenhagen gallery Etage Projects, rather than a store, and created the sterling range for the space’s current show “Wearables,” for which artists crafted wearable pieces of art.

“I like to challenge myself…I wanted to do something more appropriate for this project and thought it had to be silver, something people could pay for with normal money,” said the designer, who sees her silver line as an opportunity to become more commercial.

She reviewed ancient silversmithing techniques indigenous to African tribes and certain parts of Asia in order to determine her own approach to the metal. “I was inspired to take a craft that was old and make it futuristic. I used a very simple hammering technique and made [abstract] faces and men and sea creatures,” she said.

Riis-Hansen’s is now a member of a growing contingent of fashion-forward jewelry designers working in silver. While big jewelers like Tiffany & Co. and David Yurman, both which have extensive sterling-silver offerings, are now focused on gold to fuel growth, some of the category’s more directional talents are returning to silver. Its lower cost enables them to design at larger scales and cast a wider net of creativity.

“Because it’s such a lower cost, you don’t have to weigh every little gram. There is a limit to what an ear can hold in weight, but it’s so nice that I can just cut big pieces and don’t have to limit myself in that all the time. I’ve opened up a lot of possibilities,” said Riis-Hansen.