The fine jewelry creations unveiled during Paris Couture Week were as distinctive as the dresses on the catwalk. 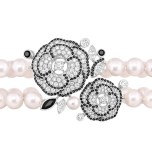 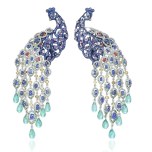 PARIS — The fine jewelry creations unveiled during Paris Couture Week were as distinctive as the dresses on the catwalk.

Designers homed in on house codes with pieces that trumpeted their provenance. Diamonds remained ubiquitous, but green and blue stones — in particular emeralds and sapphires — also made a strong showing, as organic designs complemented the floral embellishment used on clothes.

Many leading jewelers sat out the season, having presented extensive collections during the Biennale des Antiquaires in September. There were only three on the official haute joaillerie calendar: Boucheron, Chanel and newcomer Chopard. They were joined by a host of brands staging presentations, including Cindy Chao, Dauphin, De Beers, Elie Top, Sabine G. and Temple St. Clair.

“We wanted to reinterpret our icons, in particular as an initiation into haute joaillerie for some of our clients who buy smaller pieces, or new clients who come to us,” said Benjamin Comar, international director of Chanel Fine Jewelry. “We wanted a line that reprises our codes and was quite simple aesthetically — uncluttered, delicate and easy to wear.”

Highlights included a necklace and matching bracelet made from two rows of pink-tinged Japanese pearls secured with camellia-shaped clasps set with diamonds and outlined in black spinels. The pieces are priced from 41,700 euros to 330,000 euros, or $47,100 to $372,800 at current exchange, making this an “intermediate” offering from the Rue Cambon house.

Boucheron padded out its Serpent Bohême pillar, launched in 1968, with introductions at every price. Among the high jewelry pieces was a white-gold bangle set with pavé diamonds priced at $272,000. The line’s signature gold granulation and drop motif also appear on a dainty gold-and-diamond watch with a mother-of-pearl dial and a slim satin strap. Available in two versions, it retails for $13,650. At the entry level, Boucheron presented its first bridal pieces, with wedding bands and engagement rings reprising its twisted chain effect in yellow, pink or white gold.

Chopard, which sometimes previews its red-carpet collection in Paris ahead of the Cannes Film Festival, capitalized on the number of clients and editors in town for couture to separately present recent creations in a suite at the Park Hyatt Paris-Vendôme, where three security agents vetted guests at the door.

“Haute couture and haute joaillerie share a passion for artistic crafts and nurture a tradition of superlative expertise and meticulous workmanship,” said Caroline Scheufele, copresident and creative director of Chopard.

The spotlight was on emeralds, tourmalines, aquamarines and tanzanites with creations that included articulated peacock earrings in shades of purple, green and blue.

Elie Top, the designer behind Lanvin’s bold costume jewelry, launched a signature brand that he touted as “high fantasy jewelry” with a cocktail that drew Catherine Deneuve, Kristin Scott Thomas, Marisa Berenson and Inès de la Fressange. He placed diamond-studded mechanisms based on astronomical objects inside gold orbs — small versions dangled from ears while a larger one was inserted into a chunky, burnished silver pendant — that could be clicked open or shut.

“The whole idea is to have always two ways of wearing them — hidden or on show,” he explained. The 16-piece collection includes five unique creations, such as a necklace with six circular gemstones aligned like planets around the neck. Select pieces went on sale at concept store Colette the day after the presentation.

New York-based Temple St. Clair made her Paris debut with a display at Les Arts Décoratifs showcasing nine one-of-a-kind pieces that she dubbed Mythical Creatures. Presented in individual boxes handcrafted by artist Nancy Lorenz, they included the Flying Fish bracelet featuring fish with heads and fins made from moonstone, the designer’s gemstone of choice, their bodies set with Paraiba tourmalines and tsavorites to imitate the changing color of scales. They jumped against drops of blue sapphire that were faceted underneath to evoke the play of light on water. Another piece, the 18-karat gold Great Horned Owl ring, was set with star sapphires, Ceylon sapphires, diamonds and emeralds, and featured another signature on the bottom — a granulation inspired by medieval archers’ rings.

“That sense of discovery and detail is something that I love and my collectors seem to appreciate, too,” said St. Clair, noting that six of the pieces — priced between $175,000 and $950,000 — have already been sold. “I always said when I was in my 20s and started this business that you need to be older to do the really serious pieces, and I think I’ve arrived at that point,” she added, noting that the line took three years of work but represented almost 30 years of relationships, including with the artisans in Florence who make the pieces.

Taiwanese designer Cindy Chao produces most of her line in Geneva and said she would continue, despite the recent jump in the Swiss franc. “Even though it increases the cost, I will still go to Geneva. From my perspective, having a perfect outcome of the work is more important than financial concerns,” she said, sitting in a room at the Four Seasons Hotel George V amid a display of her work, old and new. “It’s very challenging to make my pieces,” she said, pointing out that the imposing jewels — sculpted in wax and cast in lightweight titanium — require special setting skills. Her latest creations had an aquatic theme and included a pair of fish earrings with flying tails.

London-based Sabine Ghanem’s Prospero collection, her third for her label Sabine G., took its references from the grand dames of Rome — including her own mother-in-law, the inspiration for the Domi selection of colorful pinky rings. The designer’s lavish yet dainty creations included the open-fronted Foglia Rosa torque necklace, the delicate modernity of the slim gold choker counter-balanced by intricate fleur-de-lis motifs set with pink topaz, pink sapphire and centered with black onyxes. Prices for the line, which is carried by retailers such as Bergdorf Goodman and Montaigne Market, range from 1,004 pounds to 9,328 pounds, or $1,524 to $14,158.

De Beers unveiled additions to its Phenomena collection with two new sets, Sirocco and Sunbeam. Made from white gold, the Sirocco necklace is set with 42.27 carats of diamonds, including a 5.23-carat dangling pear-shaped diamond pendant worth 780,000 euros, or $881,150. The diamond specialist is also introducing more accessibly priced options, including champagne or L-grade diamonds, which can be up to five times cheaper than colorless ones.

“I was thinking about the idea of time and the visual and artistic representations of the concept of time itself. That led me to ideas like circles and running water, so I created the entire collection around that and the principle of stacking, like memories that accumulate,” she explained.