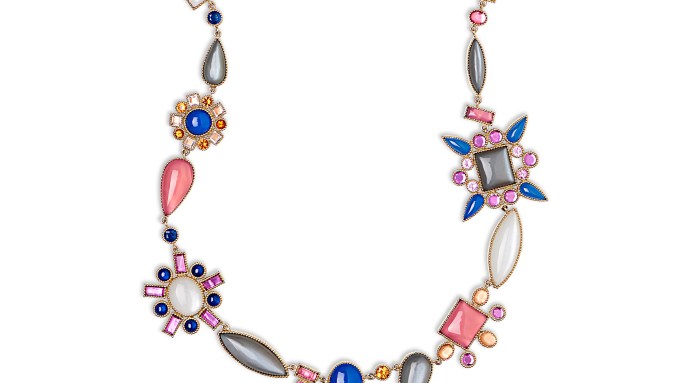 The luxury sector may be showing signs of timid recovery, and the sparkly objects on display at the Las Vegas jewelry shows this month did their best to dazzle buyers into parting with their dollars. Like last year, exhibitors hedged their bets by creating opening price point items designed to hit the $5,000 to $7,000 retail sweet spot, but an increasing number of fine jewelry designers at the Couture show went bold with one-of-a-kind pieces ranging into six and even seven-figure territory, indicating that the demand exists for unique gold and gemstone pieces with high perceived — and actual — value.

“Things are starting to look better than they have in past years,” said Greg Kwiat, chief executive officer of Kwiat and Fred Leighton. “There’s the sense that people are appreciating — and purchasing — jewelry again.” For family-run Kwiat, which specializes in important large stones, such as a pair of 13.5-karat pear-shaped yellow diamond earrings for $2.2 million, it was an opportunity to celebrate its 110th anniversary with a 10-piece collection of marquis-shaped diamonds in laurel motifs. Those pieces ranged in price at more than $100,000.

Garrard was also showing its high jewelry hero necklaces and tiaras, much of it made for crowned heads of state, but also introduced a more affordable range called The Enchanted Palace, taking inspiration from the Great Exhibition Crystal Palace of the Queen Victoria and Prince Albert era. These started with fly-shaped turquoise and diamond rings for $3,700 and went up to a jumbo one-off fly ring that converted into a sapphire solitaire. The blue gemstones are even more popular since Kate Middleton inherited Princess Diana’s Garrard engagement ring.

But it wasn’t just heritage brands like Kwiat and Garrard that went big at Couture. Adam Foster, a fine artist from St. Louis, made his wholesale debut at Couture with a collection starting at $7,000 for gemstone stud earrings and going up to $750,000 for outsize one-of-a-kind brooches, an even bigger risk considering the category is considered niche for all but Madeline Albright and Queen Elizabeth.

“I believe in brooches, but they can also be converted into pendants for more versatility,” said Foster, noting another prevalent trend.

Coomi Bhasin of Coomi, always one of the more prolific designers, with over 1,000 new items for each Couture show, unveiled a range based on Guadi’s designs for the Sagrada Familia chapel in Barcelona. Featuring colored gemstone mosaics on one side and textured gold and diamond designs on the other side, the collection ranged from $5,400 to $60,000, but Bhasin herself was casually wearing a one-of-a-kind necklace featuring ice-cube sized aquamarines surrounded by diamonds that retailed for nearly $1 million, as did several other statement necklaces.

Designers like Bhasin and Irene Neuwirth reported selling several of the one-off pieces at the beginning of the show.

Anita Ko, known for smaller-scale, but diamond-heavy fashion-forward designs, was busy filling orders with Net-a-Porter for her new collection, ranging from $1,150 to $67,625.

Fernando Jorge, the São Paulo-based newcomer who has created a stir among fashion editors in the last couple of years with his colorful designs, unveiled his first diamond-focused collection, called Brilliant, and ended up taking home a Design Award prize for his “Disco” earrings priced at $59,400.

Realizing the opportunity in fine jewelry in the e-tail space, Moda Operandi launched an ambitious live program during Couture, for which they produced 33 virtual trunk shows. Chief executive officer Deborah Nicodemus reported that sales tripled week-over-week with the onset of the show on June 2. In general, fine jewelry sales grew by 300 percent over last year. Nicodemus said the most expensive item Moda has ever sold was $800,000, but that most items fell in the $7,000 range. Among the most popular during Couture were Nancy Newberg pearl earrings, Foundrae pendants and Yeprem hand rings. Key Categories were statement earrings including shoulder-duster styles.

“This was a great way to kick off our fine jewelry program. We plan to launch 10 new ‘shows’ per month, covering other jewelry shows around the world and also producing our own editorial shoots,” she said. “There is still a lot of room for expansion in this category.”

For the multitasking British designer Stephen Webster, who was awarded the Cindy Edelstein award for nurturing young designers at Couture, there was opportunity to grow both high and low. He noted that customers had been requesting more one-of-a-kind high-jewelry pieces, such as black diamond stingray-shaped cuff from his ongoing Jewels Verne sea-inspired collection, which also spawned new iterations of the Hammerhead shark bangle. “Someone had to have the solution to the Cartier nailhead, so it’s the Stephen Webster Hammerhead,” he said. The most luxe version came in white gold with invisible-set sapphires for close to $100,000.

On the other end of the spectrum, he’s collaborating with 19-year-old skater Blondey McCoy on a unisex range called Thames, some of which will launch at the new Palace store in New York this summer, and also exclusively in his first men’s jewelry shop in Harrods opening July 1.

“I’ve known him since he was 12 years old and he’s been buying my jewelry. I was in Hong Kong a month ago and there’s his picture, 40 feet tall, in the window of Valentino, photographed by David Bailey. These kids are so clever, like Vetements and all that, they limit their production so they’re always short. They’re a different group of people who don’t want to fit into the luxury world, but they’re in it.” With regards to pricing, he said, “I knew I had to achieve the $500 to $3,000 range so we used 14-karat gold, but their core is pretty weird because Drake and A$AP Rocky are big shoppers at Palace, so that fits more into a proper luxury world.”

Ever versatile, Webster was also showing a “Cock and Bull” set of two poultry and meat carving knives for $7,000. An extended set, each featuring different beasts on the bronze handles, retails for $50,000. “I’m sort of going in that home direction as well,” he added.

Elsewhere, the most prevalent design trends were colored stones, as in Spinelli Kilcollin’s “Pegasus” hoops featuring multicolored sapphires with emerald and ruby amulets set in 18-karat yellow gold for $5,300 and Larkspur & Hawk’s large hand-painted Cora earrings for $6,000. Painting and enameling featured into many designs, such as Selim Mouzannar’s emerald necklace framed with black enamel and Eva Fehren’s White collection featuring miniature versions of her artwork set under crystal quartz. The “portrait” style settings were also used at John Hardy.

Emeralds by far made the biggest showing (a small victory for ethical emerald miners and supplier Gemfields, which outreached to several designers), as did other less expensive green hard stones such as chrysoprase, malachite and turquoise. Pearls also seemed to be enjoying a modern moment, like at Mizuki, who also unveiled a one-off Tahitian pearl and diamond range called Mizuki Privé.

Popular Couture exhibitor Marco Bicego touted retailers such as Saks Fifth Avenue, who have made a sizable investment in fine jewelry with their Vault shop-in-shop concept. The Saks buying team was out in full force, looking for exclusives and often getting the lion’s share of new pieces from big brands. Said Moise Cohen, president of Marco Bicego, USA, “We are so grateful to retail partners like Saks who make the investment in us, time and again, even when things are tough. We show that appreciation by doing special things for them. It’s a two-way street.”