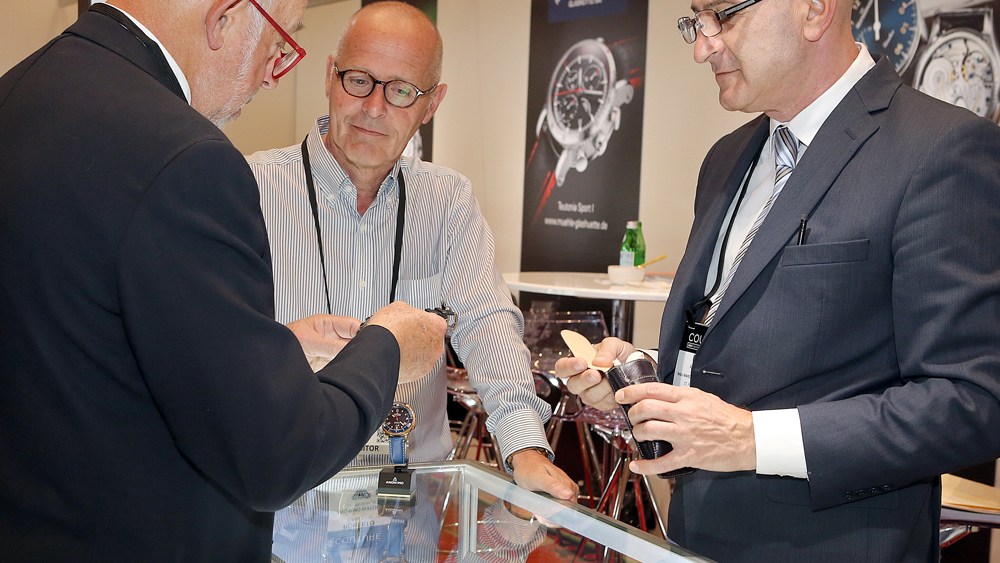 Differentiation through diversity. That mantra is leading the charge amid a continued environment of disruption as show organizers of the Couture jewelry show and exhibitors prepare for this year’s run.

“Based on conversations we’ve been hearing, I would say the state of the industry is improving in general,” said Couture show manager Elana Cutler.

Buyers and brands are set to descend on Las Vegas at the Wynn resort May 31 through June 4 to display the latest in fine jewelry at a time when many across market segments are scrambling to be heard.

Cutler, in talking about the evolving business, pointed to more and more brands focused on experiences and customization — themes that are fairly common across a number of industries.

David Yurman has upped the ante on the in-store experience, especially as it boosts investment in the wedding business. The New York-based company recently introduced a jasmine tea ceremony for wedding appointments at stores and launched on the Farfetch platform in a bid to reach a global customer. In April it began testing an assisted-selling app to help with appointment bookings and styling.

“Let’s throw out the term brick-and-mortar,” said Yurman president Carol Pennelli. “They’re physical shopping locations. They’re just a consumer touch point. What we’re seeing is that we’re leveraging dot-com to drive more traffic to our stores through various technology innovations so that we are having more of an emotional connection with our customers.”

Across channels, the business is growing. Of particular note is the men’s wedding band business, which Pennelli said is in the very high double-digit growth area, spurred by men looking for bands or to make a fashion statement.

There’s a certain maturation that has taken hold of the market, pointed out jeweler Fernando Jorge.

“When there was a fine-jewelry resurgence, there was impulse, excitement and adventurous purchases,” Jorge said. “I found that the clients that have been exposed to such adventurous, creative jewelry have also started to refine their look and get more educated. So clients are coming to us with a bit more knowledge and practical expertise of fine jewelry.”

That is in many ways running parallel to what’s being observed industrywide and the relationships between brands and retailers, the designer added.

“Everybody is focusing on their strengths and finding the way that works for them,” he said. “It’s not just show, show, show and not confirming sales.”

Portugal-based Eleuterio is set to make its U.S. debut at Couture, launching a collection boasting new polishing techniques in an effort to create a more contemporary, younger look. The decision to expand into the U.S. is being driven by a new generation in the family-owned business led by Luis Antunes. The company also trades in England, Japan, Russia, Switzerland and Poland, with France another market set to launch this year.

For other brands, not new to Couture, their product strategies are as varied as the competitive landscape. Shots of color appear to be big this season.

“I’m amazed by how much consumers want to bring rainbow into their lives, not just in an accessories, costumey way, but in a fine [jewelry] way,” said designer Jane Taylor of her namesake business.

Eva Fehren cofounder and creative director Eva Zuckerman noted her own play with color, which she said she’s been doing a bit more of lately. There’s also been growth on the Eva Fehren White bridal business.

“I feel most excited right now about continuing to create, pushing the one-of-a-kind part of our business because I feel really creative and it allows me to be extremely adventurous,” Zuckerman said.

That in some ways plays out with a broader shift she’s seeing with the customers and retail partners of her New York line.

“I think our customer has a certain playfulness and I’ve seen stores and customers become more adventurous in terms of the kind of cuts and shapes that they’re willing to explore,” Zuckerman said.

Color is also in for Jacquie Aiche of Los Angeles, known for her crystals mined from Brazil. More of that, along with pieces for layering and opal inlays, is what she’ll be bringing to Couture.

“I’m not going to say [business] is fabulous and life is great. It’s definitely been challenging, but I’ve been enjoying the challenge and I’m having a lot of fun with it,” Aiche said. “It’s moments of reinvention. In the past several years, the jewelry market has just become extremely oversaturated.”

She pointed to examples of that reinvention in her work, such as the opal inlays and the sale of reworked vintage Rolex faces. It’s a business she said is “silently exploding,” although she’s selective about the distribution, especially considering it takes roughly three to four weeks to complete one watch.

“People say you have to reinvent yourself. Well, right now it’s every six hours,” she said.

“We’ve seen the last couple of years have been heading to where we are at the moment and a lot of our positioning is watching a model that was fairly straightforward — and the model of wholesale to retail and all the things we know work within that model — shifting. I think even with the products and the way you launch them, we’ve made a huge shift,” Webster said. “Some of that will be obvious when we come to Vegas, but it’s also the way we are focusing on more capsules and eventlike product launches rather than making a collection, going to Vegas [and] then it’s in stores making a delivery in September. If [that model’s] not over, it’s nearly over.”

Another major shift for the Stephen Webster business? The designer is welcoming the second generation into the business with the addition of his 26-year-old daughter.

Webster calls the move to onboard his daughter “future proofing” the business by bringing in new blood and the potential for new customers. Of course, the other end of that spectrum is continued cultivation of the conversation with existing clients. Last year Webster introduced kitchen knives that were successful. More recent was a sterling silver straw retailing for $175 and part of a broader bid to reduce waste.

“In a way, of course it’s connected to jewelry,” Webster said of the non-jewelry pieces he’s working on. “What’s happening is that I want to be, over the next three years, to be looked at much more as a creative powerhouse rather than just being Stephen Webster jewelry.”

A few other trends have emerged, chief among them personalization and a homing in on understanding and working with the customer at an individual level.

“Everything about the collection is really intended to be personalized, the way that you can combine the necklaces or the rings,” she said. “It’s all about reflecting how to wear them to express themselves. I see them as autobiographic for sure. We work with so many of our customers and we never see someone walk in with the same combination of pieces so the idea of customization is a really important part of the brand.”

Los Angeles-based Zoë Chicco Jewelry has been offering personalized options since 2005, starting with initials, but the brand has taken it to another level with mantras and the addition of names, dates and location coordinates.

“People just gravitate towards things that are personal and that they can do themselves,” said Chicco, who mentioned the company invested in a large engraver to accommodate quick turns for retailers.

That’s in addition to a portable engraver the company invested in, which it recently took for the first time to a trunk show.

All of this is especially important as the market continues to see more and more women buying jewelry for themselves. It’s not a new trend, but it’s a behavior that continues.

“I’m seeing a lot more women buying for themselves in jewelry, which is really nice to see. It’s not so much something they’re looking for as gifts,” said New York-based Alison Lou creative director and designer Alison Chemla. “I like the idea of people using jewelry as a different way of expressing themselves and not waiting for it.”

Alison Lou recently opened a store in New York on 69th Street, which has become a learning lab of sorts to study her customer base, who she’s seeing more and more frequently walk through the doors to perhaps buy a piece or learn about the brand and become a repeat customer online.

Spurred by customer feedback, in May the designer launched a lower-price-point line called Loucite, which starts at $125 for a pair of 1-inch Lucite, hoop earrings. She’s looking at expanding that line.

Yael Sonia and her New York line of the same name has made similar moves with its business, more recently creating entry-level price points, starting at about $850 retail, for the younger, aspirational shopper.

Last year Yael Sonia made a return to Couture after five years away as the company focused on its direct business. It at one time had a store on Madison Avenue, which it shuttered about four years ago in favor of a by-appointment showroom, which continues to be the focus of the business.

Diversification in business strategies can also be partially chalked up to the Internet and social media, where brands find more and more trust is first earned there.

“When I first started my business in 2006, Instagram wasn’t invented yet,” said Anita Ko, founder and designer of her namesake Los Angeles label. “Before Instagram, you really had to work with your retailer and build your reputation and things just moved slower. With the invention of social media, first it was Facebook and now Instagram, things just move so much quicker and you’re able to help the client directly because they can message you or you can direct them to a current retailer.”

That’s all in tandem with trunk shows; she just came back from one in Vancouver at Holt Renfrew, as she stressed the continued importance of meeting customers in person.

“With jewelry today it’s very much like fashion,” said Greece-based Ilias Lalaounis Corp. international chief executive officer Demetra Lalaounis. “Before, clients used to only stick with their favorite jewelers and wear that style. I think what we see more in jewelry is that they may combine different jewelers and different looks together and make it more their own. Clients are getting more and more comfortable with creating their own style and as a jeweler you have to be able to give them enough choices….Clients are getting more and more knowledgeable maybe because of their exposure to social media. The trust comes with the exposure.”

Even with all that social media brings, the one constant Lalaounis said is the follow-through after any connection made on Instagram or another platform.

“You cannot give up on service,” she said. “That creates confidence and confidence is the best thing to have for running a business and going forward.”