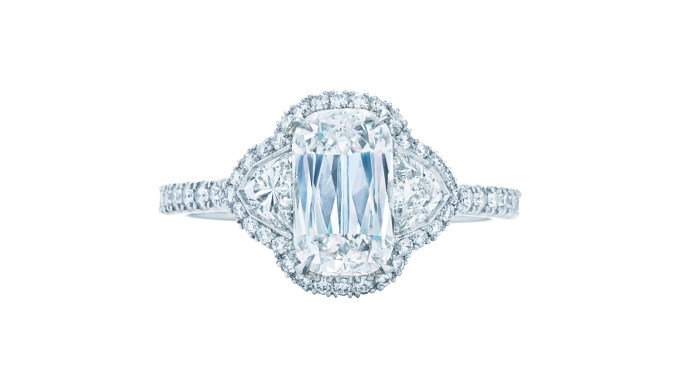 The Couture show has always prided itself on delivering high-quality attendees, not necessarily the most, for its vendors. But with the addition of CoutureTime, a watch pavilion with 31 brands — like Omega, Baume & Mercier, Chopard, Bulgari, Tag Heuer, Tudor Watch, Montblanc, Zenith, Raymond Weil, Gucci and the LVMH-owned Dior and Fendi Timepieces — the show expects to draw more buyers to the event, set for June 2 to 6 at the Wynn and Encore resorts in Las Vegas.

While the patina of exclusivity around fine designer jewelry hasn’t dulled, the category always faces challenges in uncertain times, so Couture’s 300-plus fine jewelry exhibitors should see a boost from the active luxury timepiece market.

“This was a big initiative for us,” said Gannon Brousseau, vice president of Couture. “When you extend into timepieces, you are going to open up to stores otherwise not into the event…to come to the show with a specific focus on timepieces and hopefully they’ll open up to designer jewelry.”

CoutureTime’s opening-night event will feature a keynote speech by Jean-Claude Biver, president of LVMH’s Watch Division, chairman of Hublot and chief executive officer of Tag Heuer and Zenith. Held at the adjoining Encore hotel ballrooms, the show aims to reduce travel for buyers there to order jewelry and timepieces.

“CoutureTime helps us better showcase our collection within the brand environment. We’ve been able to transform the ballroom space for the full Baume & Mercier experience,” said Fred Martel, president of Baume & Mercier North America. The brand is continuing to expand its wholesale network in markets where it is not or underrepresented. “With fewer than 200 doors today, we have room to grow in almost every region, with an emphasis on the Midwest, Florida and Texas.”

Facing changing demographics, including younger customers who are increasingly buying jewelry for themselves, retailers will also check out the jewelry offerings at the Wynn.

“I believe that fashion and jewelry have never been closer than they are now in terms of in-store product offering. Our focus has always been about design with a point of view, and perhaps watch buyers may be drawn to that,” said Brousseau.

There will be no shortage of social media opportunities for them to share their experiences. On the social front, Tudor Watch has partnered with Instagram and Hodinkee to present a tutorial on the value of social media for brands. Couture’s own Instagram account features jeweler takeovers and two special posts each show day.

For exhibitors focusing on the highest end of the market, macroeconomic factors are always top-of-mind. Greg Kwiat, president of Kwiat and Fred Leighton, said, “The markets have been volatile since the beginning of the year, and no question that’s weighing on fine jewelry. The high-end customer is more reluctant to spend money in uncertain times. Still, there’s a lot of positive momentum as customers [seek] new things, and we’ve come up with ways to stand out on a crowded field.” The Kwiat family has partnered with the Goldberg family, creators of the Ashoka diamond cut, to be the exclusive U.S. distributor of the stones. They have collaborated on a collection of wedding and engagement rings, necklaces and earrings priced at $4,000 to $500,000 and up. At Fred Leighton, Kwiat says the brand’s new pieces take the best vintage inspiration from its estate pieces, like Art Deco clips that transform into chandelier earrings for $15,000 to $75,000, and vintage charms embedded into carved hard-stone pendants priced at $4,500 to $20,000.

Necklaces are also trending at Japanese pearl specialist Mikimoto, which is playing with color, using colored gemstones in its newest pieces.

“It’s really hard to keep up with what’s trendy, but from Day One, we’ve treated our pieces as art rather than trends,” said Arman Sarkisyan, who specializes in one-off pendants priced at $15,000 to $250,000. “These days, I’m working more on a bigger scale, because I like a bigger canvas.”

But the show is also an opportunity for buyers to suss out new talent in the show’s Design Atelier, where up-and-coming brands such as Polly Wales, Eva Fehren, Larkspur & Hawk and Kavant & Sharart will make their Couture debuts.

Elsewhere, brands from abroad are using the show to break into the U.S. The Kering-owned Chinese brand Qeelin will bow here, as will France’s Messika Paris. The 11-year-old brand last year launched in six Neiman Marcus stores and founder and designer Valerie Messika said she hopes to open 30 to 40 more exclusive U.S. retail accounts. The modern diamond jewelry in invisible settings appears to sit on the skin like a tattoo, appealing to a younger customer, but Messika said, “It was not a marketing strategy. Fifteen years ago, this was my vision of what was missing in the market. There has been a change in the air; on red carpets and in movies, you’re seeing women who aren’t supposed to be wearing diamonds, wearing diamonds.”

She attributed this to a shift in customers’ perceptions of fine jewelry. “It used to be ‘A diamond is forever,’ a serious heirloom. It is still important, but now women care as much about jewelry as they do about fashion, and they mix them more casually. You don’t look too old if you are wearing diamonds.” The trendy pieces like ear cuffs and double rings, some with opening price points of 1,500 euros, or about $1,700, appeal to younger self-purchasers.

Stefere Haute Joaillerie, which ranges from $2,000 to $60,000, also offers ear cuffs at $300 to $8,300. “Ear cuffs are trending, and I have used similar designs to my previous pieces, as they prove to be working well,” said Corina Larpin, owner-designer of Stefere, which recently launched in Saks stores in New York, Beverly Hills, San Francisco and Miami, regions where it sees the most opportunity. “I wanted to keep a similar aesthetic to create jewelry that consumers could match.”

Marli New York has a less-is-more theme with the tag line, “Discover the Magic of Minimalism.”

“Since we launched, our demographic skewed to a younger and ‘young at heart’ audience,” said Maral Artinian, founder. “Our designs are edgy and the prices are affordable, so we do target younger and Millennial customers. Our jewelry is designed to be part of her everyday outfit, whether she’s a working woman or a stay-at-home mom.”

Also appealing to Millennials and self-purchasers are classic and collectible pieces that have become signatures, like the open bangle from Jemma Wynne. “It’s what we started with eight or nine years ago, and it has always done well for us, so we updated it with new colors to give our customers an exciting way to add to their stack — all under $5,000,” said cofounder Jenny Klatt.

“We really focused on the self-purchaser and things stores feel are quick-selling pieces for both men and women, so most of our pieces are in the $1,000-to-$4,000 range,” added cofounder Stephanie Wynne Lalin. “We even have some colorful studs starting at $685.”

While the show attracts about 4,000 retailers, Brousseau said, “We have controlled retail growth. We aren’t rushing to report that 10 percent increase — there’s not as much value in that as people saying, ‘We saw better stores than we ever have.’”