Many brands brought out their big guns, showing one-of-a-kind pieces alongside extensions of existing collections.

At this year’s Couture show there was a positive and steadfast energy among attendees and exhibitors as they descended on Las Vegas. The global retail world at large might be grappling with a possible economic downturn, but showgoers spoke of a renewed focus in the fine-jewelry category and of a customer who is still very much shopping and looking for unique and special options.

“The more we talk about recession the more scared we get,” explained Kwiat chief executive officer Greg Kwiat. “Around December there was a tremendous discussion about the coming recession, but that doesn’t seem to have played out. Business has remained strong, particularly in the United States,” he reported.

“In the business-to-business sector, I think the confidence is there,” added Pomellato ceo of the Americas Nathalie Diamantis. “But people are very clear about having strong collections. Retailers want brands that bring added value and that differentiate themselves.”

The executive underscores what was a major narrative at this year’s show — many exhibitors chose to round out collections by elevating with new iterations of pieces the consumer is familiar with, although that is not to say there wasn’t overall newness. Many brands brought out their big guns, showing one-of-a-kind pieces alongside undated existing collections.

At David Yurman, for example, there were elevated versions of many of the brand’s iconic styles, but the showstoppers were pieces from the David Yurman Artist series.

“He literally handpicks every stone and makes sure that it lays properly,” said Carol Pinnelli, president of David Yurman. “David and Evan really do source the world for the best stones and beads.” 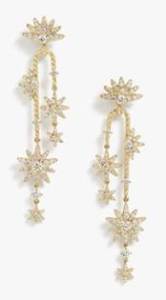 It was the Starburst Collection, inspired by fireworks in Paris and set in 18-karat gold with white diamonds, that proved to be the most popular with buyers Pennelli said.

The new pieces are “much finer and much lighter in scale,” the executive said of the new iterations.

The male consumer may account for a drop in the bucket at many jewelry houses, but David Yurman takes the category seriously, including a fully expressed wedding collection.

“It’s now 20 percent of the business, in some stores it’s 30 percent,” Pennelli said of the men’s category, noting the bands and men’s bridal category are driving the category.

“Men’s is our fastest-growing part of the business,” adding “that customer really is a loyalist and collector.”

The brand is also gearing up to open its largest store, a three-floor 5,000-square-foot flagship set to open on New York’s East 57th street in November.

“We are moving from Madison to 57th Street because it’s a global luxury location with strong foot traffic from international tourists, as well as a local demographic. That really is positioning us alongside all the luxury brands on the street,” Pennelli said.

Evan Yurman designed the store with his father, and the two are planning to launch exclusive pieces that will be sold only at the new outpost.

Gold is always an evergreen trend at the Couture show and Milanese house Pomellato is quickly becoming known for its offering of the precious metal. 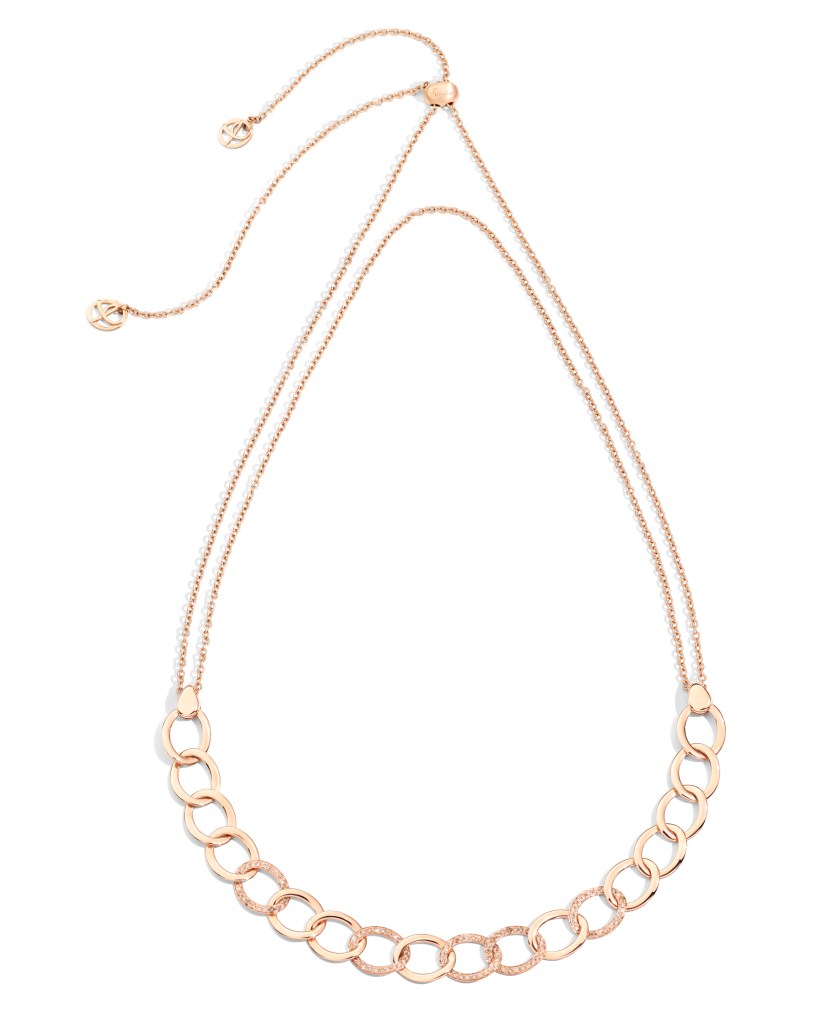 To add to that they introduced the Brera collection, named after the art and cultural center of Milan.

The assortment takes their craftsmanship in gold links and pares it down to a softer and thinner version, matte on one side and high polish on the other.

“We have been known for a heavy rich link forever, but there is also a lot of room for the alternative,” Diamantis explained. “Sometimes people want something more daywear. This is really daywear for us.”

The executive said the bracelets and the rings from the collection have been the strongest sellers for the Italian house.

The Pomellato salon was bustling, but as the executive cautioned, “our goal is to grow with our partners not so much to grow our distributions. Quality over quantity.”

As the discussion turned to the economy the Pomellato ceo sees her customer “…open and willing. I don’t see any signs of a recession. People are very busy; they are shopping all over the world. Our business is very strong globally, and continues to have double-digit growth in our retail channels,” she explained.

Another trend seen throughout the show were personal pendants and coins, found on necklaces and charm bracelets. Often they felt unique and added a level of personality and a keepsake quality.

“Lockets have always been a core part of what I do, but this year more than ever buyers were really drawn to them,” said designer Arman Sarkisyan.

“I think there’s definitely a movement toward amulets, coins, charms, pendants and layering all of it. Clients can start small and build; maybe their first piece is a small locket or a heart pendant and then for every special occasion they add to it, collecting over time to tell their personal story. It’s a great way to attract a slightly younger clientele who want to invest in fine jewelry, while creating a layered look that’s slightly imperfect but sophisticated.” 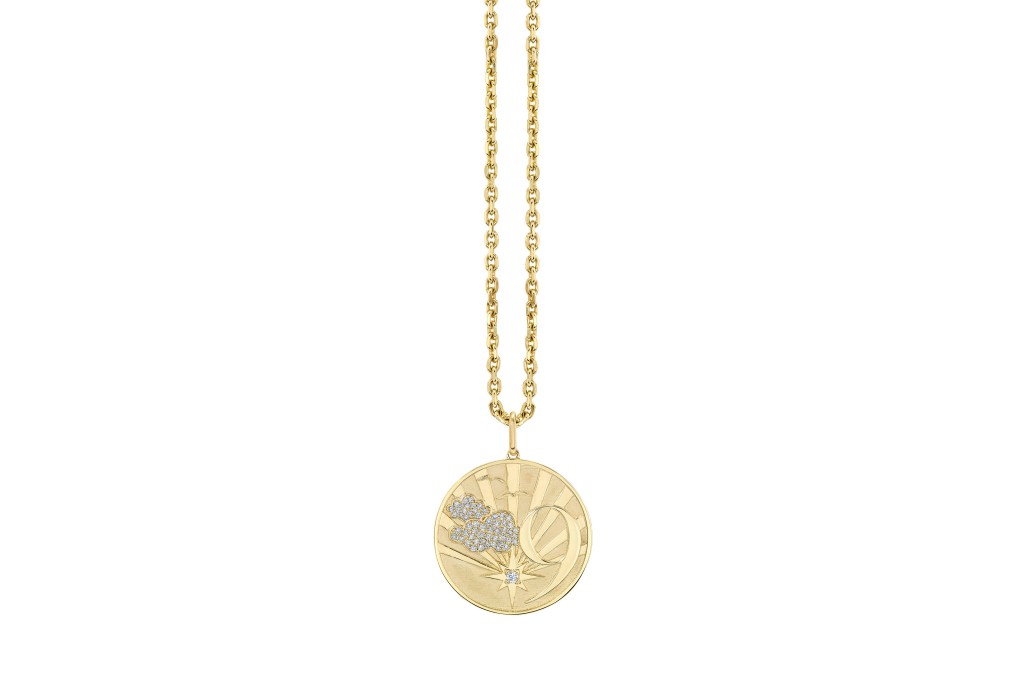 One of the coin necklaces from Sydney Evan’s “Token of Love” collection.  Courtesy

Over at Sydney Evan, designer Rosanne Karmes is celebrating 18 years in business. Karmes, who is known for her evil-eye pieces and is unabashedly superstitious, channeled the trend into 18 coins called her “Token of Love” collection. The anniversary theme also played out in some chainlink bracelets and necklaces that used unique links and were subtle renditions of a one and an eight.

Anita Ko showed options to layer up personal diamond pieces with bracelets and necklaces. Ko showed them piled on, capturing a big trend seen there.

“Most of my clients buy their own jewelry now, they don’t wait for a man to buy it,” she said.

At diamond purveyor Fred Leighton and Kwiat there is a renewed focus on the bridal category.

“Bridal has long been a core part, we are always looking to see how we can grow the business,” the Kwiat said. For them, it’s all about their proprietary cuts: Kwiat round, Ashoka and Fred Leighton round, three unique cuts that are the anchor of the house’s focus.

“We’ve been having a lot of success,” said Kwiat of the house’s current collections, “and we thought there is still a lot of exploration to do within them.”

One such collection is the Starry Night offering, which uses settings that seem invisible and give the illusion of diamonds floating on the skin.

They have pushed into emeralds, sourcing their stones in Colombia with direct relationships with the mines. “What we do with diamonds, that level of expertise, we want to bring to the emerald business,” Kwiat said.

Messika Paris, another house known for its diamonds, placed the precious stone with unusual materials like woods and feathers for Valérie Messika’s new “Born to Be Wild” collection, inspired by the American southwest. The collection marks a focus on the U.S. market where it will open two stores in the fall.

The Diamond Producers Association, a global alliance of the leading diamond mining companies formed in 2015, also made the rounds at the show, but in more of an educational capacity, taking meetings with various designers. It had news to share as it has released an independently researched “total clarity” report on its member’s impact on local communities, employees and the environment.

“Now more than ever, consumers want to know where the products they buy come from and understand the social and environmental impact their purchases,” said Jean-Marc Lieberherr, chief executive officer of the DPA.

“This independent research sheds light on the evolution and transformation of our industry over the past 15 years,” Lieberherr said.

“It’s critically important organization,” added Kwiat. “When they first began it was smaller as an idea, and the team has proven it is good for all of us in the business, including the mines.”

Hearts on Fire, another diamond brand, was pushing its recent collaboration with influencer Hayley Paige. The bridal designer interpreted a mix of bands. Paige, who attended the show, wore one on her pinky ring, right in step with the diamonds for everyday trend.

Swarovski, now a player in the created diamond space and having pulled out from this year’s Baselworld, also made a big push at Couture.

“It felt a little too unfocused. The cost is so vast; you are competing with so many super brands,” Swarovski said of the reasoning behind exiting the Swiss watch and jewelry show.

In Las Vegas, it chose to unveil a collection with Prince Dimitri of Yugoslavia using created diamonds.

“I’m not used to it yet, to me stones are natural,” he said, ”but I like the concept of not hurting the earth.”

The collection is a first for the brand in the bridal category, which Swarovski said, “should have been a no-brainer.”

Sustainable practices are a focus for the brand, unveiling a recently developed process to take the lead out of all its crystals.

“The lead isn’t harmful to the end consumer, but to the factory worker it is,” she said.

The debate of lab-grown verse natural diamond was a popular discussion, so much so that it was one of topics at this year’s first CoutureTalks education series.

“I feel the younger generation is embracing it,“ Swarovski said. “My mother may not buy one, but my daughter will only buy one.”