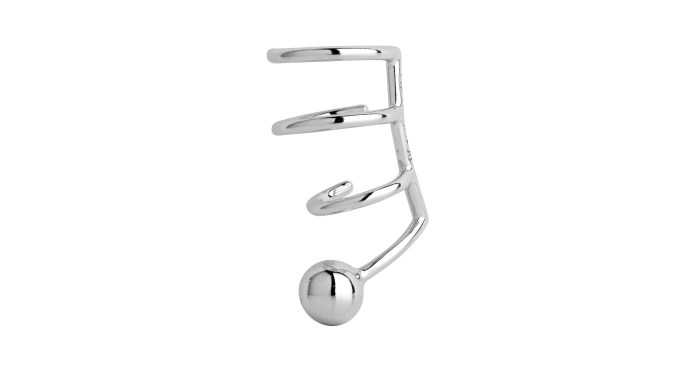 COPENHAGEN — On the sidelines of Copenhagen Fashion Week, the Danish Fashion Institute cohosted The Jewellery Room, an initiative now in its seventh edition aimed at positioning Danish jewelry on the international fashion map. Held at Nikolaj Kunsthal on Friday, it showcased 13 of the country’s labels, including heavyweights such as Pandora, Georg Jensen and Ole Lynggaard and smaller labels like Maria Black as well as 12 brands from Sweden, Norway, Finland and the U.K.

Newcomers to the show included Blue Billie, Sammi Jo Coxon and Bergsøe (that was chosen by Danish film director Susanne Bier to create jewelry for the TV show “The Night Manager”). The event drew around 600 visitors, according to organizers.

“We want to become the global platform for jewelry,” said Pernille Møbjerg Knudsen, cofounder of The Jewellery Room, also noting that the plan is to bring the Jewellery Room to London in fall 2017.

The wholesale domestic market for Danish jewelry grew between 2 and 3 percent annually since 2013 to an estimated 1,07 billion Danish kroner in 2015, or $159.2 million, while wholesale total exports were up more 100 percent from 2013 to 2015 to an estimated 17.5 billion kroner, or $2.6 billion according to the Danish Jewelry Association.

Dollars rates are calculated at the average exchange rates for the period concerned.

“The exports figures were still driven by Pandora with a dramatic growth to more than 16 billion kroner, however with a positive influence from other major Danish brands such as Ole Lynggaard and Georg Jensen,” explained Jens Moller, director of the Danish Jewelry Association.

“A lot has happened in the last three years; a lot of Danish brands are starting to look internationally,” said Maria Black, the Danish goldsmith behind the namesake label with a celebrity following including Alicia Vikander and the “Game of Thrones” cast. She noted that while matte silver is popular in Scandinavia, shiny is the favorite style almost everywhere else.

Sophie Quy, buyer of fine jewelry and fashion jewelry for Net-a-porter, praised the region’s offer with such pieces as Sophie Bille Brahe’s croissants de perle and Maria Black’s ear cuffs. “These are statements but still in that classic, minimal Scandinavian look,” she said, noting that Maria Black’s Stellar collection of faux piercings that debuted a few weeks ago on Net-a-porter is selling really well. In general, Quy cited single earrings, chokers and stacking among the biggest trends.

After two stores in Copenhagen, one in Stockholm and one in Sydney, Ole Lynggaard plans to open an unit in Paris in the beginning of next year, followed by one in Munich. “It’s very important to have our own stores in Paris, Munich and London. That’s what we are focusing on right now,” said Michael Normann, Ole Lynggard chief commercial officer. The brand is also set to be part of the new Bucherer space slated to open at the Illum department store this fall. (The city’s other department store Magasin also has a new jewelry area slated to open this fall.)

Meanwhile, rumor has it that Georg Jensen is to release later this year a capsule collection with homegrown talent Ole Yde.