His collection is expanding with a significant gold range. 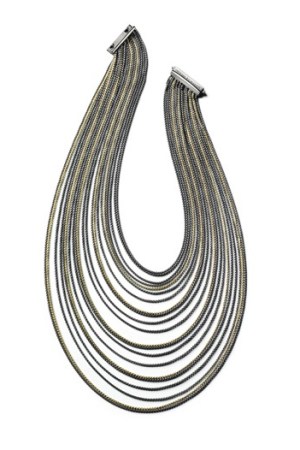 Talk about a golden goose.

David Yurman is expanding with a significant gold range, creating another identity beyond the famous gold and sterling silver “cable” chains for the label he founded with his wife, Sybil, just over three decades ago.

“The best thing is that this was organically grown, it was not by intent. Basically, this is one big art project that we’ve been evolving and expanding for the past 32 years,” Yurman recalled from his headquarters in Manhattan’s TriBeCa neighborhood.

David, Sybil and their son Evan, design director for men’s, timepiece, bridal and high jewelry, decided to take the collection in a new direction and launched the gold group for fall.

Previously, gold comprised just 20 to 25 percent of the pieces, but going forward, it will make up nearly 70 percent of the brand’s offerings. This was the most obvious design departure for the company, and fall’s three “serious gold collections” — Starburst, Lantana and Tapestry — include a full range of earrings, necklaces, bracelets and rings in varying shades of the precious metal.

“Sunburst is something that Sybil has wanted to do. It’s about flowers, sunbursts and bows — shapes that connect to things we know in life. She has this love of fireworks,” Yurman said.

Despite the historic prices gold is reaching these days, Yurman said it’s not discouraging to him.

“The increased use of gold in our collections reflects my creative inspiration,” he noted. “My designs are driven by artistic sensibilities, not by raw materials. Our business continues to thrive despite rising costs of raw materials, because customers value our design and craftsmanship, and the intrinsic value of gold.”

Besides an emphasis on yellow, white and rose gold and spicing up their mixed metal combinations, there’s a Black and Gold group, and the men’s collections pair titanium and rose gold. Lantana includes three mini-collections inspired by a recent trip to Paris and a fascination with night skies. Starburst, Starlight and Midnight Pearl bowed at June’s Couture Show in Las Vegas, and each uses elements like oxidized black rhodium, blackened metals and black diamonds offset with bright, translucent semiprecious stones.

Fans of Yurman’s famous cable styles needn’t worry, though. The theme still makes up about 40 percent of overall jewelry sales, and after all, it is the foundation of the company.

Yurman was living in California in the mid-Sixties pursuing his passion for art. He met Sybil, a fellow sculptor and painter, in 1969. (They married in 1978.) After apprenticeships under sculptors including Jacques Lipchitz and Theodore Roszak and designing sculptural and craft jewelry for a decade, the couple took their creations mainstream. In 1982, they introduced the cable that would become a signature.

“We needed to stand for a look and we chose an element — this helix material made from twisted wire that we now call cable,” Yurman said. And while it’s arguably the house’s best-known design characteristic, less than half of the jewelry sold is purely cable. “There’s always a helix design somewhere — but it’s only 40 percent of what we sell.”

The $500 million company now boasts 25 freestanding stores (a Nashville boutique recently opened and Palm Beach Gardens, Fla., is up next in the fall); employs more than 600 people, and has expanded to include men’s, eyewear, timepieces and fragrances.

Yurman faced tough years in 2008 and 2009, resulting in a 30 percent decrease in business and plenty of layoffs — but he said all of those positions have been rehired and then some.

The designer said he saw the rebound start in 2010, and he expects to continue the forward momentum this year. He said the company’s biggest change in the past decade lies in the quality of the product. Everything is now vertically quality controlled, from the mines to the actual stone cutting, and this has helped them get more playful and inventive.

Next up: opening more U.S. stores, expanding the 60,000-square-foot TriBeCa offices by 30 percent and bringing more production to New York. Currently, 78 percent of the brand’s pieces are made in the U.S. The other 22 percent includes watches made in Switzerland, chain components and hammered metal soldered in Italy and pavé work done in China.

“The value of gold and silver changes the paradigm. Why go overseas to do this [manufacturing] when the percentage of your value is more metal than labor? The only reason to go overseas — why we went overseas in the first place — was because of capacity,” Yurman said. “We didn’t have enough hands to get our work done.” He wants, however, to bring another 10 percent of this work back Stateside and develop more local production.

“We had a tremendous financial crunch and a lot of people’s lives were disturbed. Every luxury business took a big dip. People got rocked and felt insecure and we pulled in for two years,” Yurman said. “But we’re back to ‘more is more,’ things are not so minimalist anymore. You want to break out.”