The move is part of a broader renewal effort led by chief executive officer Céline Assimon.

“We need to shake things up,” said Assimon, who spoke to WWD from the jewelry house’s new store, on the Avenue George V in Paris.

“I really want to open doors,” she added.

“It’s really a collaborative project. After 26 years, the brand is ready to stand on its own,” she said, noting that founder Fawaz Gruosi had stepped away from the privately owned label earlier this year.

Gruosi founded the label in 1993, using stones that weren’t the most sought after, like black diamonds and the opaque, icy diamond.

“He came out with this incredible, crazy idea that high jewelry could be about volume, about contrast,” Assimon noted.

Assimon, a luxury executive who gained experience at Louis Vuitton and Piaget and spend 15 years in the U.S., has headed the high jeweler for nearly a year.

“We have put into place a pretty collaborative process, with the atelier, the jewelers and the studio, and this is, going forward, going to be the way we create — at de Grisogono — new pieces,” she added. 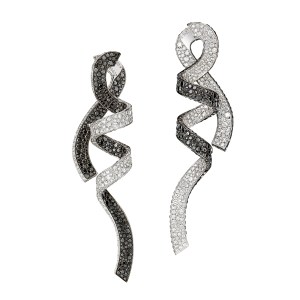 Tarpin, a 27-year-old from France, has already designed a small collection of six pieces called Prologue, with black-and-white diamond stones, including paved, ribbon-like earrings. It is the first stage of the yearlong design program meant to fuel a creative vein at the house.

Tarpin has been working with the de Grisogono jewelry studios in Geneva since May. Two more installments of jewelry designs from the collaboration with Tarpin are due next year.

Assimon was after both creativity and technical expertise.

“It’s not only true for jewelry, it’s true for couture, [you] need to have a sense of fabrics, how they fold and fit — and it’s the same for gold and titanium,” she said.

“Emmanuel [Tarpin] is one of the few artists to have the technical knowledge as well as the understanding of the process of making high jewelry in the atelier. One of the key points of our collaboration is the quality of his drawing and sketches, which will be the starting point of the new designs,” she said in a statement announcing the collaboration. 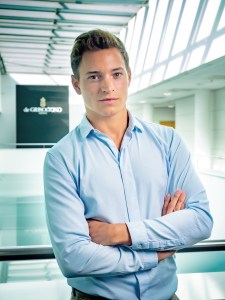 “The volumes really come to life,” said Tarpin, noting a similarity between the contrast of shapes, colors and textures he uses, as well as those of the jewelry house.

A rising star in the jewelry world, Tarpin sold a pair of aluminum geranium leaf earrings from his first collection at the Christie’s auction house in 2017.

Reflecting on shifting consumption habits, Assimon said she seeks to cater to modern generations of women purchasing jewelry for themselves.

“Women today are experiencing a new evolution, in a way — we work, we make better money than we used to, not enough, but still, better — and, with financial independence also comes a freedom of choice,” she said.

“Today more and more women are not only buying for themselves, but they buy without the approval, the blessing, of their significant other — it’s not about pleasing them, it’s more than a self-purchase, it’s a self-purchase for you, not a self-purchase to fit idea of what the woman should be,” she added.

With this comes, more individuality, she added.

“There’s the self-purchase and it’s great, but if you self-purchase something that you’re expected to then it doesn’t say much about you. When it’s really your choice, then it becomes interesting,” she said.

The executive noted the label has crafted pared-down versions of the house’s signature Allegra rings, made with a series of spiraling rings that float over the finger, as the more voluminous models are less practical to wear for daily life.

Contrast in color and materials, as well as generosity of volumes are the house codes, she noted.

In choosing the location of de Grisogono’s new Paris store, Assimon said she was won over by its natural light, proximity to the Four Season’s Hotel and tall ceilings. Moving away from the center of the French capital to a spot on the golden triangle makes sense for the house, she added, looking up at the Baccarat crystal chandeliers in the space.

De Grisogono also has stores in London, Paris, Geneva, as well as resort locations like Cannes and Saint Mauritz and Courchevel, in addition to flagships in Dubai, South Korea and Kuwait.