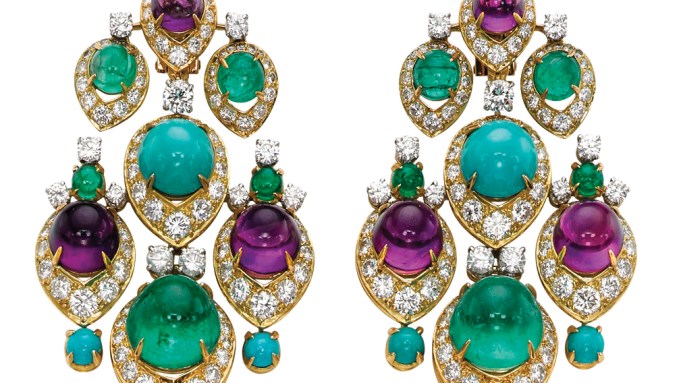 Jewelry and history have cross-pollinated for decades, with politics, economics and changes in social norms long influencing design. Now the current plummet in the prices of precious commodities like gold, diamonds and silver has leeched a larger mood onto the jewelry-collecting market — moving its culture away from a craze for large stones and toward an appreciation for dynamic pieces with historical resonance, regardless of their raw-material value.

“It’s a mix of economic and sociological factors,” said Tom Burstein, Christie’s international jewelry director. “All these things that go into play are very subtle, but it causes these [aesthetic] trends to happen.”

Until recently, precious stone-laden designs reigned as the benchmark of jewelry collecting. But the fall in prices in the precious stones and metals trade — with diamond valuations declining by up to 25 percent in the last year and gold, though rising in the last month, still down nearly 30 percent from its 2012 peak (the larger by-product of a sluggish oil market) — has heralded a new mood.

As the raw materials comprising jewelry are no longer considered safe investments, collecting has seen a shift. Now, semiprecious pieces of historical importance have become the must-haves for collectors.

In the world’s most exclusive auction houses, history and provenance are now prized, leading collectors to pay surprisingly exorbitant prices for pieces made of semiprecious materials — attributing the items’ value to their rarity and visual expression of era-specific archetypes rather than the worth of their raw components.

The shift has been gradually strengthening in the last few years, but recently picked up with the increasingly casual mood in fashion, a higher level of education among consumers, and the aforementioned raw-material devaluations.

Said Sotheby’s Lisa Hubbard, cochairman of jewelry for the Americas, “If you are looking for a tangible investment, something that will retain value, great jewelry designs — as opposed to just stones — certainly should be on the radar.”

As Burstein told WWD, “Jewelry collecting today is more about artistry than, let’s say the actual calculation of the costs of materials…jewelry is now definitely part of the art market.”

A necklace largely comprising amethyst, blue topaz and morganite designed by jeweler Jean Schlumberger for Tiffany & Co. realized $725,000 at Christie’s New York Magnificent Jewels auction in December. It was originally estimated to bring between $200,000 and $300,000. Similarly eyebrow-raising was the $93,750 a bidder paid for a Bulgari necklace of 18-karat gold and eight ancient Roman coins at Sotheby’s December Magnificent Jewels sale; it was originally estimated to cost between $12,000 and $15,000.

While an audience seeking exceptionally rare precious stones still exists, the newer market for pieces with some history behind them appears to be on par with furniture collecting habits. Savvy aesthetes would not expect a “Sitzmaschine” chair by Bauhaus master Josef Hoffmann to be priced according to the cost of its timber. As more time passes since his creations were produced, the rarer they become, and therefore the more valuable.

The same logic can be amply applied to original pieces by now-deceased designers such as Schlumberger, Suzanne Belperron, Louis Comfort Tiffany and David Webb.

“A lot of these pieces are from an important time and are not made anymore,” Burstein noted. “It just needs to be looked at as a whole.”

Hubbard added, “As an audience grows for these special pieces, the supply simply doesn’t satisfy the demand — which results in higher prices.”

The trend is primarily American- and European-based (the Chinese, by contrast, appear to still be captivated by the precious-stone market). Megawatt sales are largely tied to designs by high-jewelry houses including Van Cleef & Arpels, Cartier and Bulgari.

Each was founded or began to flourish at the turn of the 20th century — a watershed moment in the history of adornment and consumption, when the Industrial Revolution’s second wave created immense privatized wealth outside monarchical bloodlines — providing a flush economic climate for jewelers to set up shop.

The houses weathered the stylistically erratic century, each interpreting its decades’ well-defined hallmarks through their own lenses: Cartier with its linear panache; Van Cleef & Arpels with refined femininity, and Bulgari with its sense of Italian grandiosity.

“Jewelry is definitely a part of the art market now,” said Pierre Rainero, Cartier’s international image, style and heritage director. “There is a search for the few pieces of a certain type of expression, just like how people who collect Picasso look to have a certain period of expression, like the Blue Period. The same excitement does exist for jewelry collecting.”

WWD isolates some of the most successful examples of the current cultural wave in jewelry collecting, with pieces exemplifying 20th-century design hallmarks.

René Lalique’s use of enamel in the Art Nouveau era is a “tour de force,” in the current auction market, where he is a “revered artist,” said Lisa Hubbard of Sotheby’s. “If you couple his incredible artistry with the fact that he is dead — there is only so much Lalique [original] jewelry out there — they all tend to sell for incredible prices compared to their intrinsic value.”

Chaumet’s tiara, set with diminutive diamonds in platinum and white gold, is a classic example of Belle Époque design.
The piece exhibits jewelers’ discovery of platinum as a medium, taking advantage of the metal’s strength to create delicate settings that complemented the era’s ethereal fashions. “Platinum could imitate the lightness of the clothing at the time,” said Tom Burstein of Christie’s.

Mauboussin’s bracelet “reflects the deconstruction of the fashion in that era,” said Hubbard. “The bracelet is meant to hang loosely, just as the dress it would accompany — it really reflects the persona of women as they came out of a highly constructed era into freedom.”

Though unsigned, this multipurpose clip — which had been in the collection of a Bavarian princess — exhibits a “purity of form” indicative to the Art Deco era, Hubbard said.

Cartier’s use of citrine through the Thirties and well into the World War II era was intended to satisfy people “who wanted more color and more volume in their jewelry, but less expensive,” said Pierre Rainero, Cartier’s international image, style and heritage director. Once the Forties arrived, “You were dealing with a world war and there was tremendous disruption of the traditional supply roots for stones. [Citrines] tended to come from South America and were easier to come by,” said Hubbard. Yellow gold also rose in popularity as a setting material because “platinum had to be used for the war effort,” said Burstein.

The postwar era heralded a sense of optimism in fashion, and with Europe left in ruins, much of that idealism was aimed at the U.S. American Seaman Schepps, and his shell motif played well into the advent of daywear for the working woman. “You have more women in the workforce and this jewelry is very decorative, but not hugely extravagant, in relative terms,” said Hubbard.

These earrings’ spectrum of colored stones is indicative “of a whole cultural revolution taking place — there was psychedelic color everywhere,” said Burstein.

Seventies jewelry was largely influenced by the fluid mood of the decade’s clothing, as well as rock-bottom gold prices (about $35 per troy ounce). Sautoirs, such as this example by Van Cleef & Arpels, were produced by a spectrum of haute joaillerie houses. “Jewelry needed fluidity for the modern woman in motion all the time,” John Loring, Tiffany design director emeritus, said of the Seventies mentality — which was also echoed in designs by Bulgari and Elsa Peretti for Tiffany & Co.

Picasso’s explosive use of color and volume is a seminal example of Eighties design. In shifting away from the Seventies’ louche, more delicate approach, she “changed the look of jewelry with large-scale gemstones in unusual color combinations — I think Givenchy referred to them as ‘headlights,'” said Loring, who is responsible for having brought Picasso onto Tiffany’s roster of artist collaborators. “In fashion, it was really a strong, structural, powerful time for women,” added Hubbard.

Van Cleef & Arpels “Alhambra” necklace is an example of the flagship commercial fine collections that haute joaillerie houses have created to drive a retail presence. As Loring described, jewelry from the Nineties through to the present is no longer aesthetically identifiable due to a “plurality” in the market. Design groups often relay their style ethos through wider-spread collections like Cartier’s “Love” range or Tiffany’s “T” line. Though a mass-produced design, this Alhambra’s lace agate inlay makes it a rarer edition, bolstering its gavel price. “If we get something at auction not readily available at stores, people will spend more,” said Hubbard.