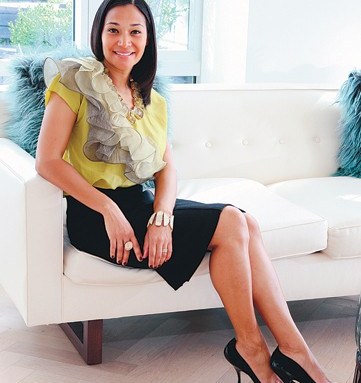 Monique Pean used to trade credit derivatives at Goldman Sachs, but now has focused her energy on raising awareness of social and environmental issues by becoming a jewelry designer.

“I was inspired by the indigenous art in Africa and Asia and I wanted to raise social consciousness,” said Péan, who started a namesake jewelry line in Manhattan in 2006.

Péan, who traveled the world as a child because her father worked for the United Nations, left her career in finance after her younger sister, Vanessa, died at 16 in October 2005. Péan created the Vanessa Péan Foundation in her name to benefit education in Haiti, a cause in which her sister was involved.

Her latest endeavor involves trying to help some of the estimated 1.1 billion people in developing nations who don’t have access to clean water. She has teamed up with Charity: Water, the nonprofit organization founded by Scott Harrison that works in third-world countries. The Charity: Water Collection by Monique Péan is made with recycled gold and conflict-free diamonds. Sales of pieces from the collection provide clean drinking water to 10 people for as long as 20 years.

“I wanted to build a sustainable jewelry line with reclaimed metals,” said Péan, noting that the gold mining process can release toxic mercury into the water near the mine.

The designs take their inspiration from all types of water. Contaminated water sources in Malawi inspired a necklace of natural black tourmaline with yellow gold and amethyst pendants. Clean water inspired a rough-hewn aquamarine ring wrapped in gold and diamonds. Lapis lazuli pendants are wrapped in the reclaimed gold that has a distinctive warm color. Prices range from $1,000 for a simple necklace to $40,000 for a one-of-a-kind statement piece.

The collection hits stores in February. Kirna Zabête in New York, Roseark in Los Angeles, Lane Crawford in Hong Kong and Ikram in Chicago are some stores that carry Péan’s collection.

Péan’s past lines include the Bering Collection, which was inspired by Alaskan art and culture, a line that combines eclectic materials such as indigenous fossilized walrus and woolly mammoth with cognac and white diamonds.

“They are the ultimate cocktail party accessory,” added Péan of the collection. “Not only do you have a beautiful piece of jewelry, but it raises an important topic for discussion.”