Diamonds a Highlight at Baselworld

With currency and stock markets plagued by continued volatility, high-jewelry creations are acquiring an extra sparkle for investors. 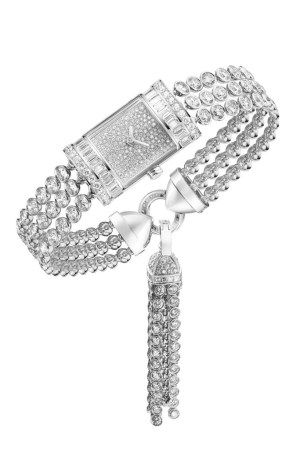 With currency and stock markets plagued by continued volatility, diamonds are acquiring an extra sparkle for investors.

In fact, De Grisogono founder and creative director Fawaz Gruosi reckons the high-end has never thrived as much.

“There is more money than before. And we never sold as many very, very, very important pieces in all my business history than in 2013. I think people got scared to invest in the stock market,” he said. “I’m talking about $3 million to $5 million just for a purchase. They’re buying something [thinking] that, if worst comes to worst, ‘I would not lose everything.’”

Those seeking investment pieces found plenty to pick from at Baselworld, where brands showcased their finest high-jewelry creations:

• London-based diamond specialist Graff, making its first appearance at the fair, showed the Hallucination, billed as the world’s most expensive timepiece at $55 million. It featured more than 110 carats of extremely rare colored diamonds.

• Harry Winston exhibited the Emerald Cluster, featuring 73 carats of baguette, round, pear and marquise-cut diamonds set in its signature cluster technique and priced at $1.24 million.

• Boucheron celebrated the relaunch of its minimal Reflet watch collection for women and men with a diamond-studded Reflet Pompon version, which comes with a detachable tassel and a $329,000 price tag.

• Chanel showed its most expensive timepiece to date, a J12 Flying Tourbillon set with 42 carats of diamonds, available in a limited edition of five priced at $1.2 million.

• De Grisogono introduced its Allegra watch, including a diamond-paved version with red indexes priced at $520,000.