The Italian jewelry brand is helping the NGO restore the coral reefs in Malaysia and has created a eco-friendly bracelet marking the collaboration.

The DoDo for Tenaka bracelet.

MILAN — In the wake of World Oceans Day on June 8, Dodo, the Italian jewelry brand bearing the name of an extinct mythical bird from the Mauritius islands, stepped up its support to yet another environmental cause.

The brand controlled by Kering-owned Pomellato is adding Tenaka to its roster of partners, by helping the social business founded by 25-year-old Anne-Sophie Roux restore the coral reefs in Malaysia. Previous Dodo’s partnerships included the ones with Italy’s World Wildlife Fund, or WWF, and Treedom.

During a press conference held on Zoom Tuesday, Pomellato chief executive officer Sabina Belli explained Dodo is financially supporting the activities of Tenaka, which draws its name from a Maori word describing the act of working together. The amount of the donation was not disclosed.

In particular, the NGO is spearheading a project of restoration of marine habitats by creating synergies among businesses and brands, scientists and local communities in the areas where it operates. Dodo is also helping the organization raise awareness by offering its communication assets to the organization.

“Dodo has been so fascinated by the project because nature has been totally part of our DNA for 25 years,” Belli contended. “Dodo is very much concerned by nature and by the planet and by all the issues related to sustainability, because we owe life to nature, and we owe the most precious treasures to it. So, for years Dodo has been always up on the frontlines with these ideas of protecting or at least talking about the main issues related to sustainability and nature.”

Belli compared Dodo’s commitment to the protection of the environment to the fable of the hummingbird, which incited fellow animals in the forest to make their parts in fighting against wildfire. “If each and every one of us comes with one tiny drop, we’re so many that we will finally make it,” Belli said of the hummingbird’s call to action.

“Roux, is [like] a hummingbird: It looks like what she’s doing is extremely small but in fact it’s huge, with Tenaka she’s helping us breathe better in the planet that we’re living in.”

A young climate change researcher and scientific diver, Roux graduated from Paris’ Sciences Po university with a degree in political sciences, before relocating to Malaysia determined to understand “how coastal communities can adapt to the climate crises and really hoping I could confront myself on the fields, to really understand what local communities living on the frontlines of the planet crises experience on a day-to-day basis,” she said, joining remotely from Tioman, an island located in the Asian country.

“I realized that the main solutions to the climate crises were to be found in the oceans,” Roux explained, adding that around 70 percent of oxygen comes from the oceans and especially from coral reefs and their ecosystems. Belli recalled how surprised she was learning the role played by oceans in keeping the air fresh. “I always thought the actual lungs of the planet were the forests and I always thought particularly the Amazon forest was participating to the maximum oxygenation of the planet,” Belli said. 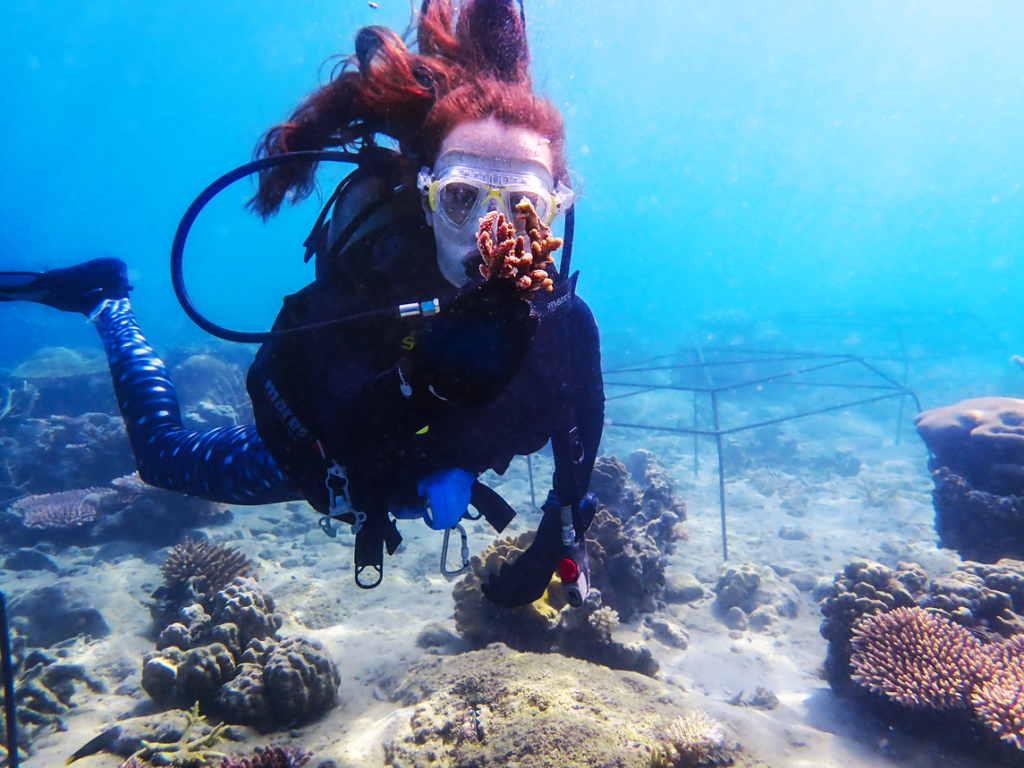 Anne-Sophie Roux at work in Tioman, Malaysia.  Courtesy of Dodo.

Dodo’s commitment to the cause is helping create a 10,763-square-foot area of coral nurseries, allowing the restoration of two hectares worth of coral reefs and consequently helping protect endangered species such as hawksbill turtles, black tip shark, map pufferfish and giant clams. Tenaka’s operators harvest fragments of dead corals on the beaches and reinstall them in the sea, tying them to eco-friendly metallic frames in the shape of a dome. After a year, the reefs become independent, and in two to three years, they reconnect with neighboring reefs.

By partnering with a network of local organizations, including scientists, dive centers, marine biologists and schools, Tenaka aims to “raise awareness about coral reefs but also to work together in this very systemic way, and to learn also from the solutions that come from the [Tioman] island because the people here are renovating and rebuilding coral reefs since 10 to 15 years already,” Roux explained. 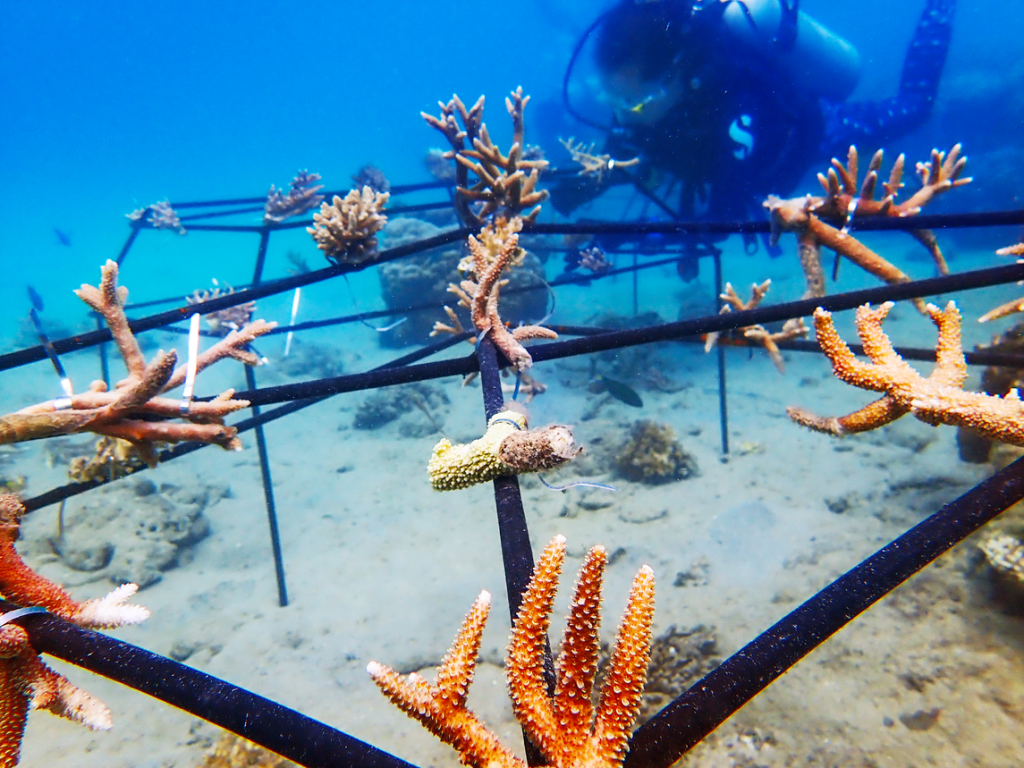 In addition to financially backing Tenaka’s work, Dodo has launched a capsule collection consisting of a Granelli bracelet featuring the signature nuggets crafted from upcycled plastic waste collected from the Mediterranean Sea and colored in blue and deep turquoise. Celebrating the partnership with the NGO, Dodo added a silver medal punctuated by a red coral-shaped enamel.

“Brands to me have a huge role to play because they also have a big community and I think when you reach the consumers, it can really be game-changing,” Roux stressed.

Belli said the bracelets, which retail for 130 euros, sold out within three hours, showing “the Dodo community is super involved and has really decided to react very positively by wearing the bracelet as a sign of support to the project.” The executive said the jewelry piece will be replicated in other color versions paying homage to the corals.

Asked by WWD about the potential of upcycled and non-noble materials in jewelry, Belli said for Dodo “it’s absolutely very consistent to go out there and combine what is our main alloy — such as gold — with other materials,” pointing to glass for example and other recycled materials. “Again [this partnership] is a point of departure,” she contended.

The Pomellato ceo praised both the company’s and Kering’s sustainable macro strategies, as exemplified by the use of 100 percent fair-mined gold. “We’ve already taken a stance very clearly in the matter of gold, as well as with diamonds that are completely traceable and come from fair-mined mines,” she said, adding Pomellato is now securing a partnership to source ethical lapis lazuli, too.

“The pandemic has very certainly accelerated the consciousness about a number of things that were up in the air…but sometimes were put on a secondary level because some other urgencies were more urgent somehow,” Belli mused. “Now for sure topics related to CSR, to ethical living and producing, to sustainability are by far the number-one priority.”

“As the ceo of this company I’m working to making sure that we perpetuate this positive legacy in the future,” she concluded.