A newly launched collection — the brainchild of Dover Street Market and Diamond Foundry — touches on how the jewelry industry's addressing green.

The display case in the Dover Street Market Los Angeles store, featuring pieces from its collaboration with Diamond Foundry, along with art by Katerina Jebb.

LOS ANGELES — Lab-grown diamonds and sustainability were served as the main course among a fashionably forward crowd gathered Thursday evening at Dover Street Market Los Angeles to toast the retailer’s collaboration with the Diamond Foundry.

Imagery featuring the body scans of a model wearing pieces from the collection were part of an installation by Katerina Jebb projected onto the retailer’s building for guests — who included Kylie Minogue, Kim Gordon, Joan Quinn and Ahna O’Reilly, among others — to view while they dined.

“We’re excited to make the collection available today both online and at the DSM L.A. store,” Diamond Foundry vice president of marketing Mona Sadat Akhavi said. “With L.A. being a city of sustainable luxury and creative jewelry design, it felt like a natural location for the launch and we look forward to the rollout to DSM stores internationally.”

The dinner proved timely as the conversations around transparency in production and sustainability continue to increasingly drive business decisions.

Delfina Delettrez Fendi, Khouri and Canot chatted just ahead of guests sitting down to dine about their approach to their capsules, lab-grown diamonds and sustainability. Here, an edited version of those conversations. 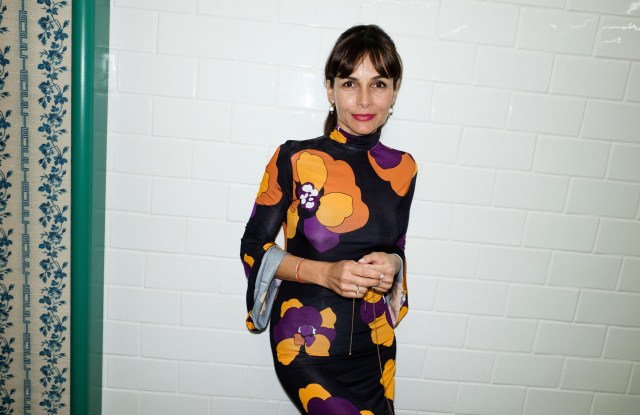 Talk about your designs for this collection: “I like turning emotions into jewelry. I didn’t know what I was going to feel with these man-made diamonds because it was the first time I was working with them. Coming from De Beers and Cartier and having worked in this world of mine diamonds and “Diamonds are Forever” — all this very heavy history — what I really felt this time was I was getting super excited. They were fresh. I thought, “OK, diamonds are a very serious affair but this time I wanted to take it lightly.” So I created pieces that you can wear with different styling options.” 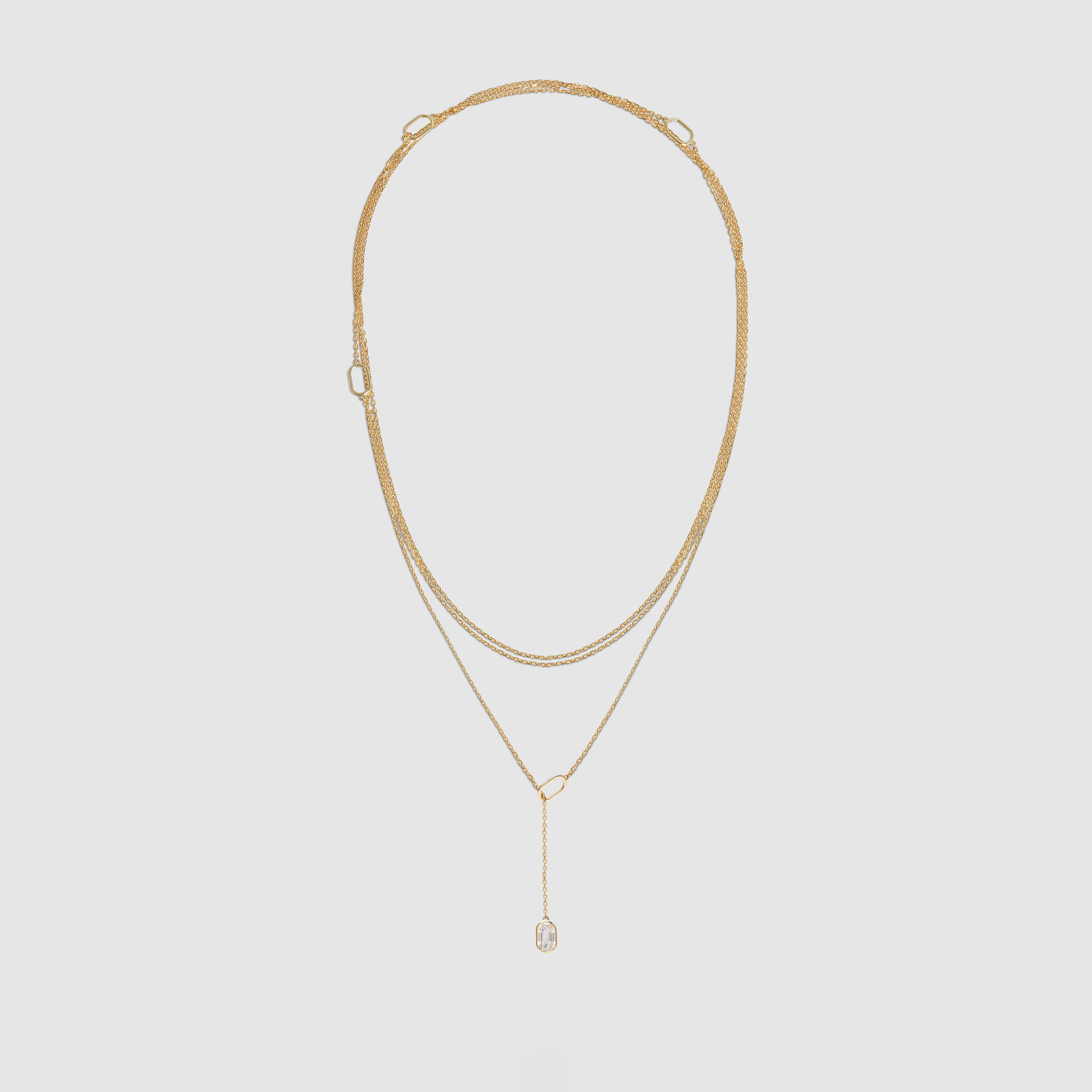 A necklace by Raphaele Canot.

Where’s this conversation around lab-grown diamonds going?: “It’s interesting because there are still a lot of questions. I was also, at first, a little bit doubtful and skeptical. What I love is they don’t carry the weight of Mother Earth. They don’t carry the big diamond history; they’re actually telling a different story. We’re in a story of incredible performance by Diamond Foundry. I think it’s a very modern story and it’s a story that is very well suited to the woman of today. In 10 years’ time probably most people won’t make it a point anymore up until a certain carat weight. I think the treasures of nature that we find in the ground will remain exceptional stones women still wear, and in parallel there will be the other [lab-grown] ones. I think they will co-habitate.”

What’s your approach to sustainability?: “I had been approached with different ideas in the past — Fair Trade and all of this — but it’s the first time we had the opportunity to work with these amazing diamonds. I’ve been in this industry so long and I never really questioned myself. The Kimberley Process [Certification Scheme] was good enough for me, and I was working with these diamonds because the [lab-grown] didn’t exist before. This time I was forced to think a bit differently and I realized it’s actually great that the jewelry industry can open up this new door. And moving forward I think the two will live in parallel, but who knows?  In 100 years maybe it will all be man-made [diamonds].” 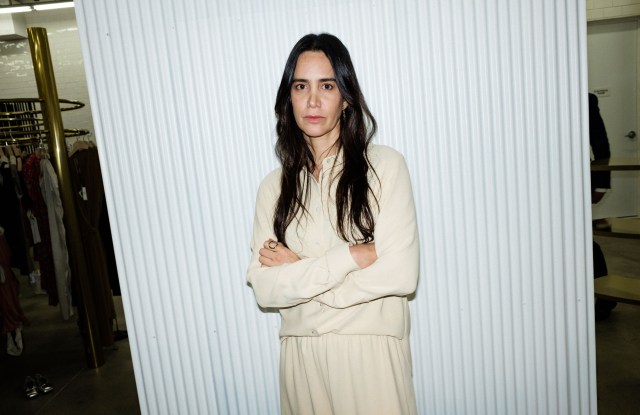 Your Designs: “When Dover Street approached me with this idea, I was so glad to be able to work with lab-grown diamonds. I thought about a few pieces I had developed in the past that were favorites of mine that I would have liked to have done in this idea of lab-grown diamonds and sustainability. What were the pieces that I was really moved by? So we had the idea of re-creating something that was already an Ana Khouri piece.” 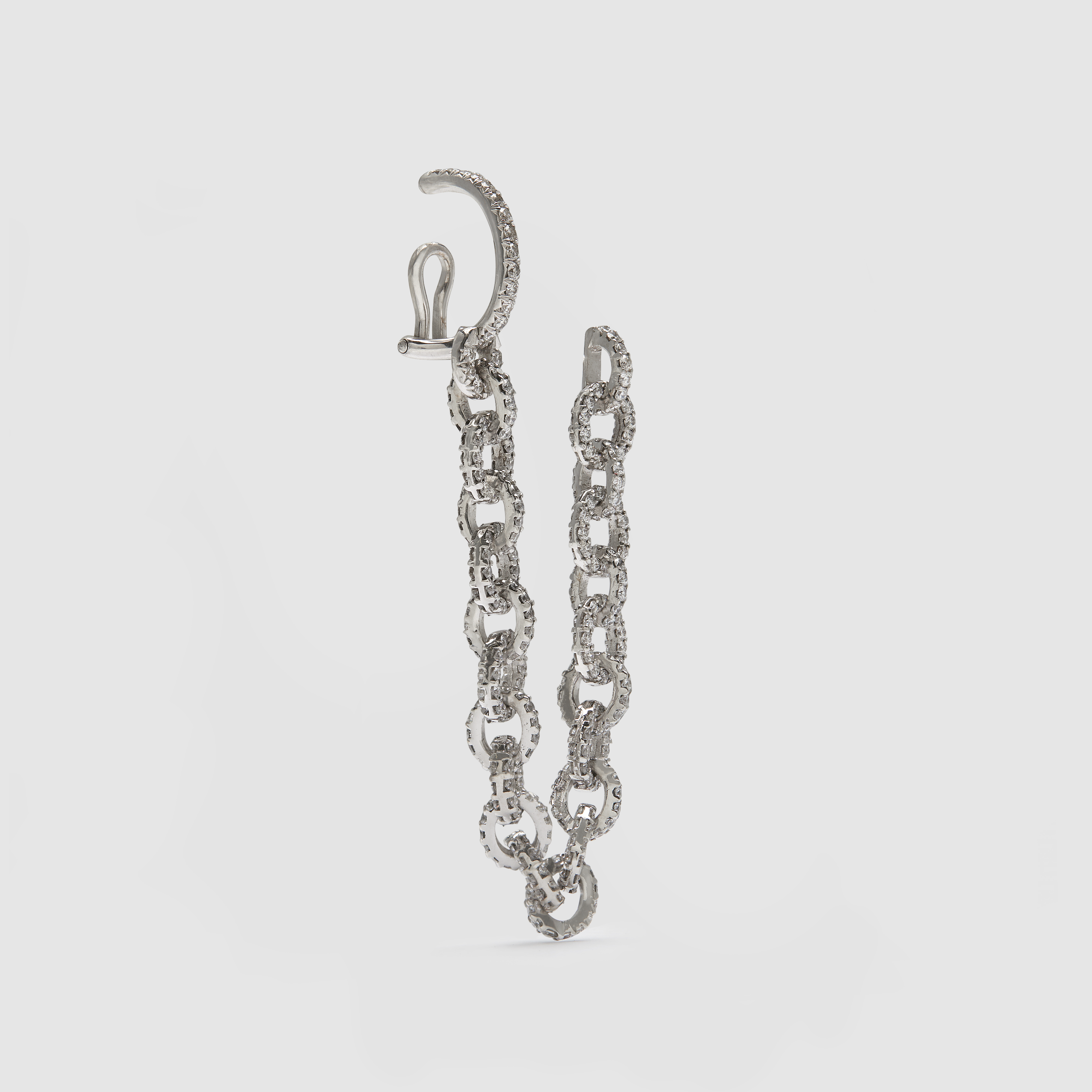 An earring by Ana Khouri.

On Lab-grown Diamonds: “It’s hard to say what’s going to happen in the future, but as a brand we’re so committed to sustainability. We only work with Fairtrade, Fairmined gold and ethically sourced stones. So when DSM approached us with this idea of working with Diamond Foundry, lab-grown diamonds and to use renewable energy and solar energy [in production], it’s really something new. It’s not like what I have seen before. So I think it’s something that is there and that I should give a chance to explore if it has to do with being sustainable and world positive.”

Your approach to sustainability: “We’re committed to being as sustainable as we can. This is something that is really important for me. It was the way I was raised and it was natural for me to bring that into my brand. The only new thing here is that now it’s lab-grown diamonds and what we were using before was ethically sourced stones. When we first got into stores, that was in 2012. And when we were talking about our brand and who we were and what our philosophy was behind the brand, it’s funny because most of the stores we worked with we said, ‘We want to talk about this’ and they said, ‘Actually, it’s not something we really talk about because how can we say you’re doing this and then other people are not doing this and we’re representing them.’ So I feel like the mind-set has been changing from years ago to now and everyone is trying to be a little bit more sustainable and the consciousness is growing.” 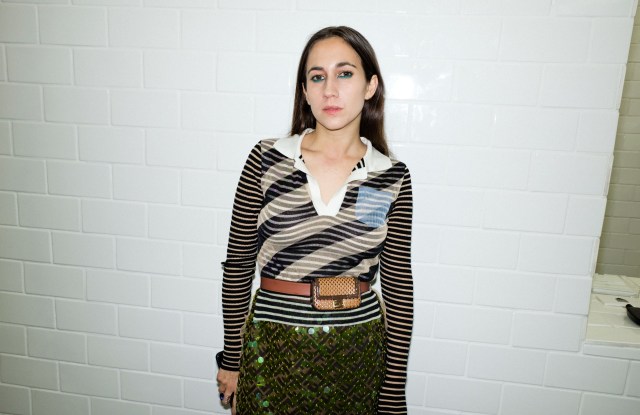 Your Designs: “Because I truly believe that the man-made diamonds are an alternative to natural-made diamonds, I wanted this collection to be an extension of an existing collection. So I worked on the twin collection. It’s a hybrid between the punk and the classics, where I worked on very classical and traditional shapes. Then I added this rebellious touch, which is the piercing that drills through the diamond. Since I’m a jeweler of my generation, I’ve always played with my generational codes, and so the piercings are part of this. I was so impressed and so happy to finally be able to touch one of those [lab-grown] diamonds. I was feeling the man-made and the natural-made diamonds in both of my hands and I was feeling the same energy. Identical. The only difference is that nature doesn’t do that perfection. So working with those diamonds they are the only guarantee that you are using an ethical diamond. There is no way we can say, ‘Oh, but I have certificates. Oh, but I know they’re conflict-free.’ No. Unfortunately, no.” 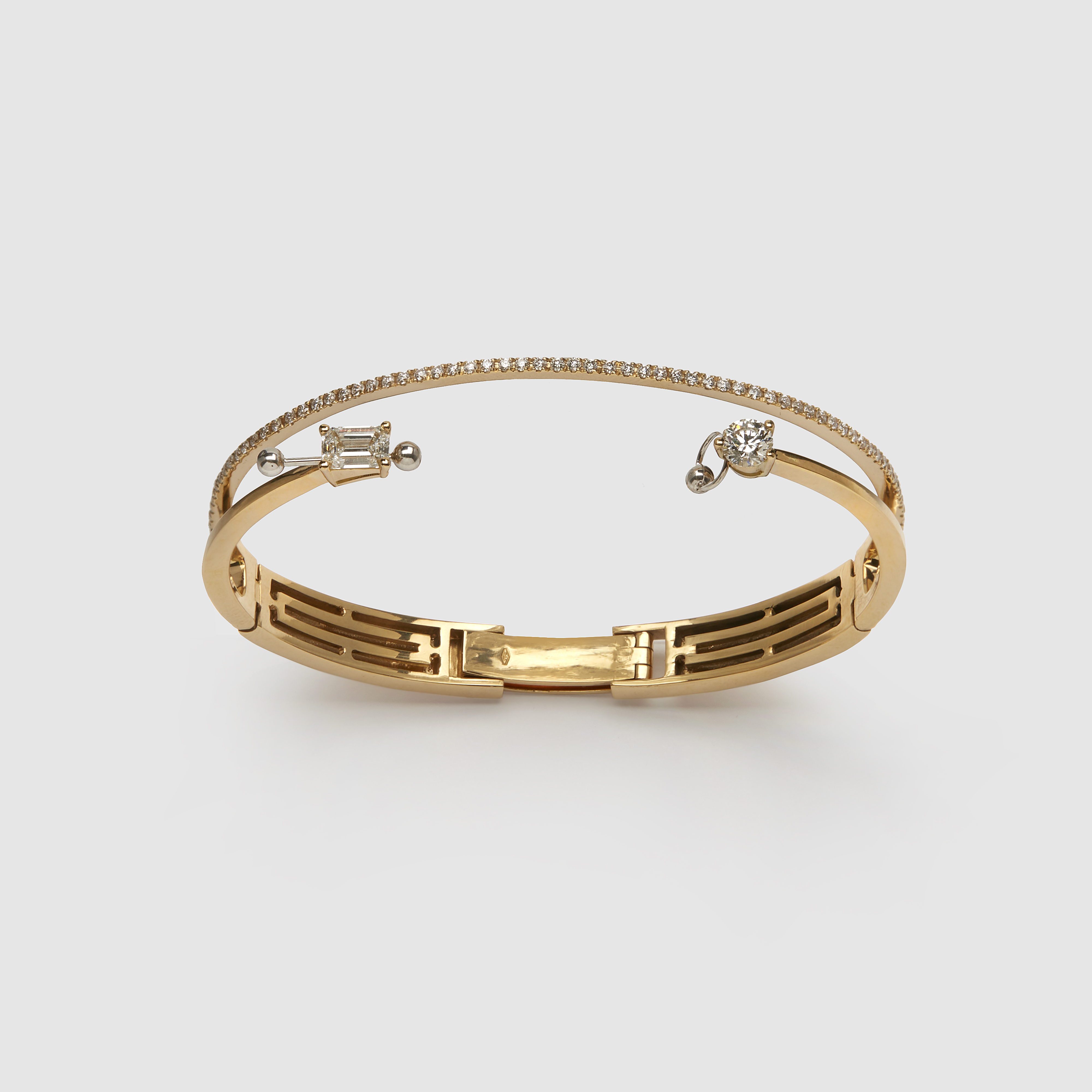 A bracelet by Delfina Delettrez Fendi.

On Lab-grown Diamonds: “I totally believe that it will be an alternative. Nothing will overlap anything. [Lab-grown and natural] will travel together. Nowadays, the ethical value has the same value as the diamond itself, especially for my generation, the younger generation. My customers, they see that this is something that is truly speaking to them, and I would like to craft the classics of tomorrow. I hope that this ethical thing will continue in the future.”

Your approach to sustainability: “I come from a fashion family and I apply the fashion rules to the jewelry world, but making jewelry the [process] is more delayed. You work on a piece that could take six months to have a prototype and you work with sustainable materials. The plastic that I use with my company, it’s all recycled plastic, for example. From my side, I wear a lot of vintage. I don’t buy that much, to be honest. I am lucky to have an amazing family archive. I try to be sustainable in my way of living. I have three children. We grow our own vegetables. We have our own farm where we don’t have cows. We try to not eat meat everyday. They [companies] feel an urge and a push from younger generations [to be sustainable]. Fashion, like music, is the greatest influence. Everybody’s touched by fashion, even people who say, ‘I don’t care about fashion.’ No, you care and the planet cares. So there is this cycle of consciousness that is growing and getting bigger, which is very inspiring.”