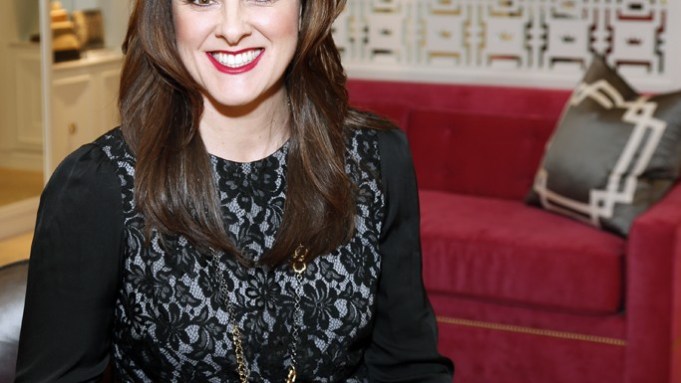 Sitting on one of the two pink sofas in her 1,500-square-foot Madison Avenue boutique, which opened on Black Friday, Turner puts a cheerful spin on her namesake company’s attitude and style. “It’s all about an aesthetic — it’s ladylike, Texas glam, always feminine, classic but updated and fun.”

Underneath the Texas charm, there’s a head for building the 13-year-old business. She’s a partner in Elaine Turner with her husband Jim and others who are in the process of raising money to roll out stores and broaden the offering. Currently, the fashion firm is roughly 80 percent owned by the Turner family; the remaining 20 percent is owned by a group from the asset management firm Fayez Sarofim & Co. and a few other individuals.

“We are still working on closing a $7 million round of growth equity funding,” said Jim Turner. “We are negotiating with a handful of firms, but there is one that is potentially leading the round. We plan to close at the end of January.”

The company operates seven retail stores and a Web site, wholesales to specialty stores including the Neiman Marcus Group and its Cusp contemporary department, and has a showroom at 320 Fifth Avenue here. Volume is approaching $10 million.

“The plan is to ramp up to 50 stores over the next five years and really ramp up our Web site,” Jim Turner added. “We have the platform, the team, the foundation and the confidence to open multiple stores. The product is ready. The store model is worked out. All the building blocks are in place, and we have some critical mass as well.”

The team includes a handful of executives from some competitors, including Monica Garza, director of stores, who came from Michael Kors, and Patty Wade, the chief information officer and a former Chico’s executive.

This season, jewelry was introduced to the collection — about 20 stockkeeping units including earrings, necklaces, bangles and cuffs. Sunglasses and a smattering of apparel that’s “selective and very item-y” such as caftans and swimwear are being considered, said Elaine Turner. “We really want to be a lifestyle brand but accessories-focused,” she added.

The collection fares best with clutches, hobos and shoulder bags, typically in raffia, leather and cork, with pink jacquard linings, bamboo accents and crown hardware. In footwear, the wedges, booties and riding boots are most popular. The brand is considered “accessible luxury,” priced $200 to $600. High-income women ages 35 to 45 who shop and travel a lot and are typically married with children are targeted with handbags that are equally suitable for either a soiree or the kids’ soccer game.

The Madison Avenue boutique, on 82nd Street next to the Jonathan Adler store, “was a dream of ours. We met in New York,” said Jim, a former investment banker. “It took us two years of looking before we found the right space. It was kind of a diamond in the rough, owned by the estate of Alexander Radon and never updated. We wanted to be in a residential area, to create a neighborhood store.” That helps with their “client-driven” approach to selling, which involves efforts to get to know customers beyond just a few superficial details. Each store stages three to eight events a month, often involving breast cancer and children’s causes, and advertising is limited and mostly online. Word of mouth is what the company really counts on to bring in clients.

Six more shops are seen opening in 2014, in addition to the existing three Houston-area stores and the three others in San Antonio; Austin, Tex., and Nashville. The stores range in size from 1,500 to 2,100 square feet.

The Madison Avenue shop, like the others, is homey. It’s decorated with some of the same elements that are inside the Turners’ Houston home, like white oak floors. The store has other residential touches, such as the bamboo circular mirror, the pink cubbies and the Jean de Merry chandelier, which Elaine Turner bought for the store after seeing the one in Bergdorf Goodman’s restaurant.

When the Turners were redecorating their home, they papered the walls in raffia. That sparked an idea by Jim. Why not get Elaine to design a handbag in raffia? He was actually joking, but Elaine took it seriously. Thus, the “viola” Jackie bag was born, marking the beginning of the Turners’ collaborative fashion business and a signature look.