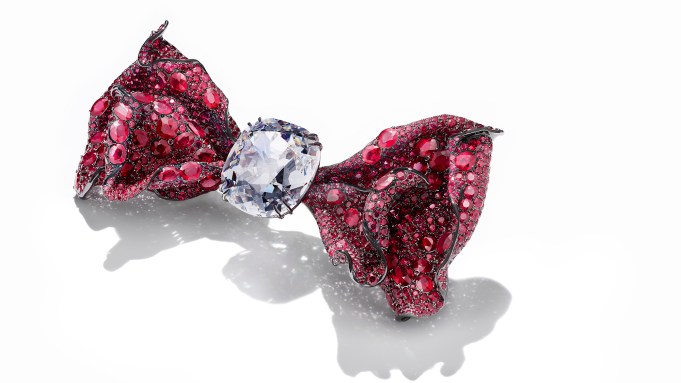 PARIS — The Biennale des Antiquaires opened its doors to the public on Saturday with only a handful of jewelers among its 125 exhibitors, following the departure of the major Place Vendôme houses that were a mainstay of the Paris event over disagreements with the fair’s organizers.

Aside from De Grisogono, back after an eight-year absence, the focus was on newcomers: India’s Nirav Modi, Cindy Chao The Art Jewel from Taiwan and Switzerland-based Boghossian. De Grisogono kicked off proceedings by unveiling the world’s most expensive rough diamond on Friday.

The 813-carat gem, named The Constellation, was purchased in May for $63 million by its partner, Dubai-based diamond trading company Nemesis International, from mining company Lucara Diamond Corp. The stone will be cut in Antwerp and is expected to produce the world’s largest D Flawless diamond.

“I’m so overwhelmed and I’m so lucky to be able, especially thanks to Nemesis, to have this type of merchandise that very, very few jewelers have — you can count them on one hand,” De Grisogono founder and executive board director Fawaz Gruosi told WWD.

The brand came with merchandise worth $220 million to $230 million, but stuck to its unconventional aesthetic. Its Folies high jewelry collection featured a number of asymmetric designs, including a pair of earrings set with two 30-carat white diamonds — one oval-cut, the other emerald-cut — priced at $18.4 million, including tax.

Gruosi said business was good despite global turbulence, with sales up 15 percent so far this year. The jeweler, which plans to open a second Paris store at the Prince de Galles hotel in October, is counting on the fair to meet new clients, though the executive lamented the lack of major houses.

“Being one of the very few is good because there are fewer competitors, but I’ve always thought competition gives better results in the medium to long term. I’ve never been scared of competitors,” he said. “I think we do real haute couture and I don’t see anyone doing what we do.”

Nickolas Polack, international director of Nemesis, noted that wholesale diamond prices have fallen 20 percent to 30 percent this year, but fancy colored diamonds are bucking the trend.

“If you take a look at what’s going on economically in the world, there’s a little malaise. Having said that, when you take a look at very special diamonds — blues, pinks — they’re creating record after record, so I think for the very exceptional, there is still great demand,” he said.

A pink diamond ring worth $10 million was among the star attractions at the Nirav Modi stand. “It’s a very old diamond,” said the soft-spoken Indian jeweler, who buys some $1.3 billion worth of diamonds every year through his trading and manufacturing firm Firestar Diamond, the parent company of his jewelry brand.

The top 10 percent of stones are selected for Nirav Modi, which launched with a bang in 2010 when Christie’s put one of its necklaces on the cover of its Hong Kong auction catalog, an unprecedented honor for a fledgling jewelry brand.

Since then, it has opened seven stores in locations such as Mumbai, Madison Avenue in New York City and Old Bond Street in London, with another to follow in Macau in October. “We hope to have 100 stores by 2025,” said Modi, who aims to build “India’s first luxury brand.”

He sees the Biennale, which runs through Sept. 18, as a platform to reach international clients, though he noted the upheaval surrounding this year’s edition — with Cartier leading an exodus of 14 top jewelers — had left him feeling “ambivalent — I think it would be great if there were more jewelers, but at the same time, there’s always a trade-off.”

The departure of Hong Kong-based jeweler Wallace Chan, who now shows at the TEFAF art and antiques fair in Maastricht in the Netherlands, provided just the opening Cindy Chao had been waiting for. “I’ve been dreaming to be able to participate in the Biennale for six years,” she confided.

She presented a selection of archival pieces, including several of her signature annual Black Label Masterpiece butterfly brooches. Among them were the 2015 edition made of rubies, on loan from Taiwanese billionaire and art collector Pierre Chen, and the 2014 ballerina design created with Sarah Jessica Parker.

The designer complemented these with nine new creations, including a $16.8-million ribbon brooch featuring a 76.91-carat cushion-cut diamond surrounded by raspberry-colored rubies, set in 18-karat white gold on a spring structure for a “tremblante” effect.

Chao said the pieces were designed with an eye on their investment value, a strategy that has paid off, since revenues so far this year have already surpassed average levels for the last five years. She does not intend to expand her business, but plans to generate stable revenues with fewer pieces.

“The stock market is unstable, the currency exchange rates not so optimistic, there’s no interest in the banks,” she noted. “A lot of collectors now are willing to put their investment into jewelry. First of all, it’s a portable asset. That’s also reflected in the way that I produce my Masterpieces. I’m very careful to use good quality gemstones for people to find a balance between the creative side and the investment side.”

Talk of money was discouraged at the Boghossian stand, where Ralph Boghossian — a sixth-generation member and spokesman for the family jewelry house — put the emphasis on its East-meets-West aesthetic, including the maison’s signature stone-in-stone inlay technique.

“The Biennale is for us where the fine art world meets fine craftsmanship. To have the privilege to be here as well was a great match for what we do,” he said. “We are just a small house, passionate about what we do and very authentic, very personally involved.”

As the Biennale prepares to transition into an annual event from next year, it remains to be seen whether jewelry exhibitors will return to what was previously the industry’s premier event.

Several houses staged private events on the sidelines of the fair, including Van Cleef & Arpels, which commissioned Robert Wilson to create the set for its new Noah’s Ark collection, on public show at the Hôtel d’Évreux on Place Vendôme until Sept. 26.

Dominique Chevalier, president of the National Union of Antiques Dealers, which organizes the Biennale, said in July he stood by its decision to scale back the presence of jewelers but was disappointed that many had pulled out.

“We need and we want high jewelry, obviously. We have never said otherwise. But simply, we want to have it in the correct proportion,” he said. “Somewhere along the line, I think we did not communicate quite as we should have.”

The organizers invited the Fondation de la Haute Horlogerie to stage an exhibition illustrating the history of watchmaking at the Biennale, which they hope will act as a bridge toward a future partnership with jewelers.