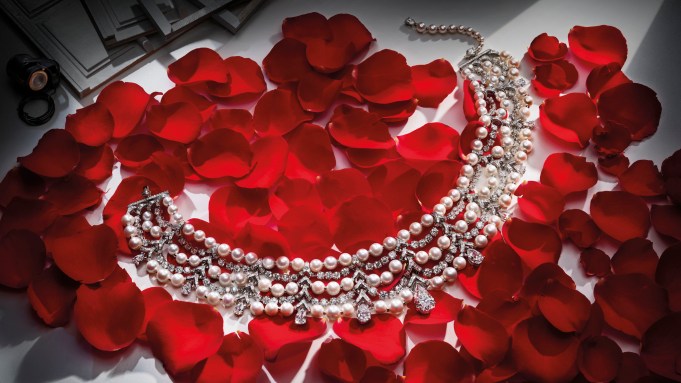 CAPRI — Cinemagia — the magic of cinema — was the theme Bulgari explored this year for its new haute joaillerie collection unveiled on Wednesday in a location strongly associated with glamour, luxury and vacationing Dolce Vita actors — the beautiful Italian island of Capri.

“Capri was really discovered and developed by Emperor Augustus, who found this jewel on the sea and built his vacation home and gardens there, followed by powerful Roman families, aristocrats and members of the Senate,” explained Bulgari’s chief executive officer Jean-Christophe Babin, emphasizing Capri’s strong link with Rome, where the brand is headquartered. “And then it became the favorite destination of actors in the Fifties and Sixties, where love stories and other legendary stories were born.”

Once again, Bulgari’s artisans created veritable works of art, under the lead and imagination of creative director Lucia Silvestri. The Action! necklace celebrates the invention of celluloid and Bulgari introduced zirconium, which has a black and silver sheen, in a choker completed by a round element that turns and is reminiscent of a film reel. Crafted over more than 800 hours, the necklace also features the flexibility of film, though it’s encrusted with 32 carats of pavé diamonds.

“The Emerald City in the ‘The Wizard of Oz’ is the destination of salvation and happiness for Dorothy and her friends,” said Silvestri. To this end, the designer wanted to capture the magic of the location with the Emerald City necklace, with a striking 21.49-carat emerald — a stone that is always key for Bulgari — surrounded by rows of triangular prisms, set with pavé diamonds and emeralds, reminiscent of towers.

A colorless 10.03-carat diamond inspired the Diamond Sails necklace, and diamonds and pearls set in undulating lines evoke the movement of the sails of Peter Pan’s pirate ship. A mother-of-pearl necklace nods to that character’s costume and collar.

The Pirates Treasure necklace is comprised of three sapphires, each larger than 12 carats, sitting in a trove of gems: 188 buff top-cut emeralds (5.51 carats), 200 buff top-cut sapphires (6.06 carats) and 94 step-cut and pavé diamonds (9.18 carats) — all set in pink gold with onyx elements.

Silvestri explained that the stone “is the first source of inspiration, and the jewels are born from the stone, not the sketch.” At the presentation, Bulgari also laid out a selection of precious stones, from sapphires to emeralds and a 131-carat, stunning spinel for special orders.

“It’s not only about beauty, but it’s a stone’s energy and personality that can be transmitted in jewel,” Silvestri said. She also recalled how she learned from the Bulgaris to “never buy a stone if you don’t know how to use it. It was one of the first lessons. We want to sell dreams but they have to become reality.”

A dream that is also a substantial business for Bulgari. Haute joaillarie accounts for 15 percent of the brand’s jewelry, said Babin. “It’s important and surely it’s an area that Bulgari can develop much more — we have a very rich patrimony, exceptional creative teams, and access to unique stones. To think it can grow to account for 20 or 25 percent is not crazy. However, it’s an unforeseeable business, so as part of a healthy company management it can’t grow to become 50 percent of the category.”

In addition to Americans and Europeans, Asians — including Chinese, Thai, Malaysian and Japanese consumers — are also increasingly loyal Bulgari clients, whom Babin believes form a balanced customer base, very much diversified in terms of age, with new wealth originated by the success of new technologies and young businesses in China and other Asian countries.

Asked if Bulgari was investing more in men’s jewels, given the changes in male aesthetics, Babin said the company is catering to an increased interest in high-end watches but at the same time it is developing brooches, which are seen as “refined accessories that add a unique touch of elegance.”

The executive was expecting many of Bulgari’s top customers, out of a total of 400 guests, to the three-day presentation in Capri.

To be sure, Bulgari has been investing in its high jewelry presentations in beautiful locations, Florence, Venice and Rome last year, and has also begun to stage runway shows to add a new, fun element.

Held at Capri’s 14th century Charterhouse of St. Giacomo, and attended by the likes of Kate Hudson and Eva Green, the show on Wednesday evening played on the movie theme. Images of Marcello Mastroianni, Monica Vitti and Vittorio De Sica, among others, ran in the background in a nod to Giuseppe Tornatore’s “ Nuovo Cinema Paradiso,” showing censored clips and passionate kisses, there were Cinecittà references and the show ended with pyrotechnics.

“The word gioiello in Italian, or jewelry, in itself contains the word joy,” said Babin at the show — and to be sure, the collection was true to that etymology.