Models in black and nude Dior gowns will wear the new pieces along with jewelry from past collections.

A piece from the Gem Dior fine-jewelry collection.

PARIS — Victoire de Castellane looked as if she was enjoying herself. Her sprawling, book-lined office buzzed with activity — packed with models, helpers, a photographer, and a rack of tulle gowns — in black or nude. The jewelry sat in trays, waiting to be chosen; for fuel, a fruit platter was also enticing.

The assembled group had gathered for a fitting ahead of a 20th anniversary event for the house’s fine jewelry, which has been designed by de Castellane from the outset. In Venice today, Dior will present the collection on models outfitted in gowns designed for the label by Maria Grazia Chiuri.

Around 200 guests, clients, press and influencers from around the world are invited for a seated dinner at the canal-facing Palazzo Labia to celebrate the new collection, called “Gem Dior” — a play on words, which sounds like “J’aime Dior” which, in French, means “I love Dior.”

In more than two decades designing for Dior, de Castellane, the house’s only fine jewelry designer, has pushed the boundaries of Place Vendôme traditions, embracing varied and at times wild themes — one line, the psychedelic Belladone Island-themed collection, included rings in the form of carnivorous plants.

One of the ways she keeps her collections fresh is by turning to a different theme each time.

“I love doing different themes for each collection. I find it’s playful for those who collect our jewelry,” she said, turning to a model who just returned to the room, having swapped her dress for one with a different cut. 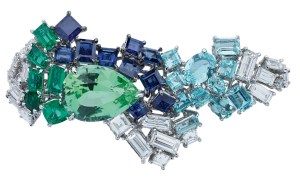 A multicolored piece from the Gem Dior collection  Courtesy

“That’s better for her,” de Castellane said with satisfaction. “Now what shall we put on her?” she added, turning her attention to the trays of jewelry.

The theme for the Gem collection is abstract art, with a focus on colors, in the form of chunky stones — nothing like the delicate, gold honey-combed lacework shown last year.

“It’s the first time I’ve worked with an abstract theme — an organic, abstract theme — because it’s not really flat and geometric. On the contrary, it’s asymmetric, it’s alive, it’s like minerals. The idea was to do pixelation,” she explained.

Lifting one of the pieces, made from sapphires of different shades that seemed to tumble into each other, she continued. “It’s as if I had taken the jewels and pixelated them, as if I had entered inside the stone, inside of many different squares — like pixels.”

She began with pieces featuring various shades of the same color, then moved on to mixing different-colored stones.

“And then it became a game of different colors together — I love making the colors play off one another, together.

“I find it extraordinary, all the colored stones that exist — bringing them alive in a way that they aren’t fighting each other. I like putting them together like friends together in one room, and no one is outshined by the others. And that — that — is always the challenge with color,” she said.

For the Venice presentation, de Castellane also plans to mix in pieces from different collections, an exercise meant to show how different styles of jewelry can be thrown together. 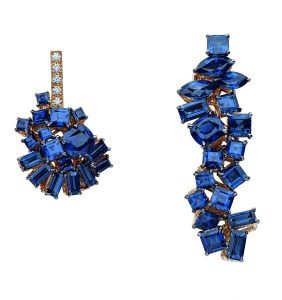 “I find it entertaining to show women that they can wear jewelry from different families of different periods,” she said. She herself wore a prominent 19th-century broach while her hands were decorated with rings she had designed herself — each made from a large, colorful stone.

Asked if it took time to coordinate with Chiuri to match the clothing with the jewelry, de Castellane’s reply was no.

“It was fairly simple. In fact, things happen quickly when it’s between women,” she said, with a laugh.

“It’s true!” she insisted, before elaborating: “I found that Maria Grazia’s gowns lent themselves well to this very simple approach, like a dancer — I thought that we had never shown jewelry worn by models and that it would be nice to try it.”

Chiuri had in the past suggested they work together, but it was difficult to do so earlier because the jewelry collections take two years of advanced preparation.

The 20 years have gone by fast, she said.

“What can I say? That it goes very quickly, and that at the same time, I have the impression that there has been a real history of Dior joaillerie for me, as if it had always existed.” 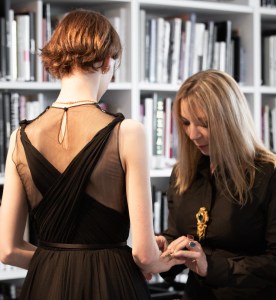 A new model walked into the room, wearing Doc Martens and biker shorts. De Castellane turned to the gowns.

“I think that will be nice, the nude color on her — I would choose that. Or perhaps black, she is fairly young,” de Castellane’s gaze shifted from the rack to the model, carefully considering the choices.

It looked like she was enjoying herself; still, the question had to be asked.

“Oh, yes, I am very much enjoying this,” she said, her eyes lighting up.

“But at the same time, I feel like it’s a ball that’s also very young — the ball of the young women,” she added. “It’s important that the jewelry doesn’t make the young women look dowdy.”