The Qeelin store on Place Vendôme.

PARIS — With an eye to global expansion, Kering-owned Qeelin, a contemporary Chinese jewelry label, has set down roots at the epicenter of high jewelry: the Place Vendôme in Paris. Tucked between two iconic French luxury labels — fellow Kering house Boucheron and the traditional French shirt maker Charvet, the brand is the new kid on the block. Not for long, however, as another Kering label, Gucci — which makes its high jewelry debut this week— will soon be opening a store on the square.

“How can you do that better than expressing it in Place Vendôme which is somewhat the landmark of international jewelry — that’s really about affirming the vision of the founder,” said Artaux. 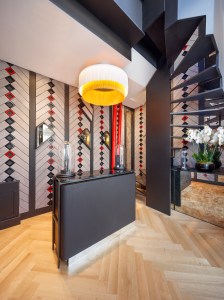 Inside the Qeelin boutique on Place Vendôme.  © Eric Sander

The store is decorated with blocks of traditional gray bricks — the kind that were used to build Beijing over the centuries — set at angles to form zigzags. Offsetting the gray matte tone are touches of red and lacquered paint, while the jewelry is ensconced in cubby holes protruding out of the walls. Bright red bamboo poles stretch through both floors. Downstairs, jewelry is also shown in bell glass covered displays, which, along with furniture lined with rows of drawers, adds to a cabinet of curiosities flavor of the place — albeit a very modern version. Upstairs, the space is more intimate, with a low ceiling and sleek, indoor design elements inspired by Yves Saint Laurent—a gold-foiled ceiling, a soft lantern-style light and lots of mirrors. 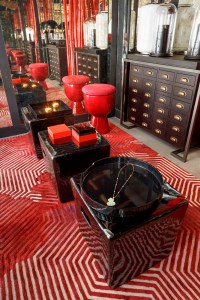 Inside of Qeelin Store in Paris.  Courtesy / Eric Sander

The label produces high jewelry from time to time, but the brand is more about “approachable fine jewelry for daily wear,” said Artaux.

“We want to stay loyal to this direction,” he added.

Chan said from the day he designed the first collection, he hasn’t thought of the label in terms of high jewelry or every day jewelry, but one thing is sure: he doesn’t want it to be tucked away somewhere and not worn.

“It’s always my vision that jewelry shouldn’t be kept in the safe — it should be enjoyed every day,” he said, noting his mother, who had a lot of jewelry, always kept it locked away.

“You should really enjoy it — that’s why I created jewelry,” he added.

Since it was founded, 15 years ago — in Paris— the brand has focused on a handful of iconic products, including the Wulu shape, a curvy silhouette that resembles the number eight and evokes the shape of a calabash, or bottle gourd plant — which, when dried, can serve as a water gourd.

This was the shape of an earring worn by Maggie Cheung — her only piece of jewelry that day— on the red carpet at the Cannes Film Festival in 2004. The brand was launched shortly after, at a presentation at the Crillon Hotel in Paris. Chan then set up a retail space in the luxury hotel, and the jewelry was soon also sold nearby in the fabled concept store, Colette.

Other images from the label include Bo Bo, a panda bear, which the label often makes in the form of a diamond-encrusted charm, and the Yu Yi lock is a symbol from ancient China, often seen in traditional forms of arts and crafts.

“All these symbols have been very well received and I think in the future, we will be still riding on a lot of direction from this motif, at the same time adding some interesting aspects to it,” said Chan. The label has ideas about how it might further develop the Wulu model, which comes in jade, red agates and even denim.

For the Bo Bo, the label plays with expression and outfits, offering the beloved creature — which symbolized peace — in playful renditions on a snowboard, a pair of skis, or disguised as a mermaid.

“This is very Qeelin, a bit Asian and at the same time, very playful — we’ll keep in this direction for developing the product,” said Chan.

The label takes red carpet pieces to the Cannes Film Festival every year, he noted, adding it was red carpet jewelry that could be worn daily.

“We have a younger audience now and we are developing, I’d say, more affordable every day jewelry,” he added.

The label seeks to draw on Chinese and Asian heritage, in a contemporary manner, he said.

“This has always been my dream,” he said. When people refer to Chinese design, they usually refer to antiques, like furniture from the Ming Dynasty, or a vase from the Qing Dynasty, he noted.

“But I always question myself — like 100 years from now, like 200 years from now, when people talk about contemporary Chinese design nowadays, what it should be,” he said. “This has always been the drive behind the design.”

When it comes to the Wulu figure, designs can vary from carrying a lot of diamonds or filled in with Jadeite — a pale green is very calm, peaceful and modern, he said.

“Sometimes I find green jade can be a little old-fashioned looking and that is why color plays a very important role in selecting the jade,” he added, noting the importance of using good quality jade.

The new store will carry an exclusive Wulu necklace in rose gold and diamond with a flower and bird pattern carved in it, and beads of jade on the chain — inspired by the Qin Dynasty, and meant to be like an artifact. The pattern symbolizes “best wishes and hope,” in a very Asian and subtle fashion, he added.

“When I am designing jewelry, I always have this influence from the West…so the Wulu itself is a very good example because it is traditional stuff that you can find in a Chinese environment every day, no matter if you are in Vancouver, Singapore or Hong Kong,” he said, noting the use of lines and curves is very modern while the symbol carries a very strong, Asian message.

The label, which has sizable distribution channels in the Asia Pacific region and potential to expand in Europe and North America, seeks to connect with Chinese clientele in Paris, said Artaux.

It is looking to expand in places in Europe where the Chinese are traveling, including in airports and in multibrand retailers in Europe, like Galeries Lafayette in Paris, where it has a space. It also has a store on the Palais Royal garden in Paris, which was opened in 2009.

Qeelin’s clientele is mostly made up of women, around 80 percent, and a young population — with around 75 percent aged between 20 and 30 years old.

“It’s actually getting younger — a good sign for brand development,” said Chan, who described clients as urban, independent and stylish. 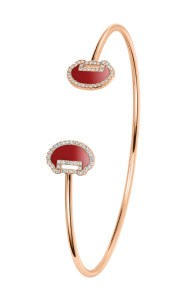 Brand ambassador, actress Sandra Ma, embodies the young, independent style that the house caters to, said Chan. She shares his interest in showing the world a modern side of Chinese culture, he said.

“Although we are in different kinds of art forms — she’s an actress, I’m more of a designer, but then we all share the same kind of vision. To me, she is also a good representative of our customer — young, confident and knows exactly what she wants,” he said.

Fifteen years ago, when he started the brand, Chan said he had high aspirations.

“I said OK, it’s kind of like a game — if you are running or whatever. Rather than running in your own city, why don’t we go do the Olympics? So let’s go to the Olympic Games, to the international arena — which is Paris.

Now the label belongs to a French luxury group — it was the first Chinese acquisition by Kering, in 2013.

“It’s a great platform for a brand like Qeelin to grow and to have a very strong and high expectation and ambitions in the future,” said Artaux.