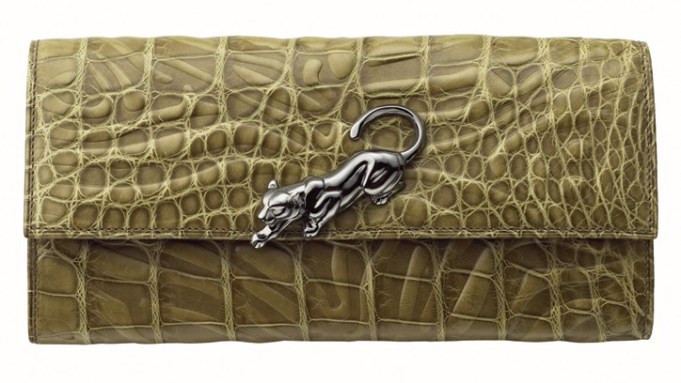 It’s not only about jewelry and watches at Cartier.

The house has been a player in accessories almost since its inception, and now offers an array of handbags, pens, eyewear, scarves, stationery, small leather goods, cuff links, lighters and home accessories, such as frames, clocks and objets d’art.

Frédéric de Narp, president and chief executive of Cartier North America, says accessories have taken on greater importance over the last three years, with sales having grown 40 percent. They represent an accessible way for consumers to capture the Cartier experience. The company launched accessories salons in 20 U.S. stores beginning in 2005 and is focusing increased attention on the category. All new and renovated shops will have the salons going forward.

“Whether it’s a $100 key case or a $1 million necklace, all of our designers use the same inspiration as they do for the jewelry,” he notes. “They reinterpret designs, and design an entire collection with one style.”

Popular watch and jewelry designs such as the Santos and Panthère have successfully carried over into Cartier’s accessories items. De Narp says that collectors of such specific styles “understand the code” and appreciate the “world Cartier is creating,” and often purchase the same Cartier style across multiple categories.

Cartier’s handbags, created in the early 1900s, have resurfaced in the last two years after providing luxury consumers with evening and day bags throughout much of the 20th century. The popularity of Cartier’s bags and small leather goods remained strong throughout the century, until the early Nineties, when handbags began to play a more important role in the wardrobe.

“When bags started becoming fashion accessories, we realized we weren’t a fashion brand and decided to let it go,” de Narp points out. “We didn’t care for designing four bag collections a year, we weren’t into that game and it wasn’t who we were.”

Early in the 20th century, evening bags were spun in gold and pleated mesh and contained jeweled ornaments. Minaudières and clutches often took inspiration from exotic influences such as Egypt, China and India.

In the Twenties, Cartier invented its vanity case for the burgeoning modern women who donned flapper dresses and hair bobs. Special compartments for cigarettes, lipsticks and combs provided space for all a Roaring Twenties girl would need for a night on the town. Some were tube-shaped with enameled gold cylinders and the Cartier “C” inscribed in diamonds. (Some say that particular style was a gift from the Duke of Westminster to his mistress, Coco Chanel.) Other cases were rectangular and flat, in black enamel, gleaming with diamonds, rubies or emeralds. In the Sixties, Cartier tapped into the abstract art movement with handbags made of colored gold and colorful optical illusions.

In 2007, Cartier relaunched its handbag collection with the Marcello bag, a simple design in leather, available in classic colors of burgundy, black and brown. “It’s a classic bag, not a throw-away. It will appreciate for the next fi ve or 10 years,” adds de Narp. “It’s really for people who understand design and fashion, who appreciate exclusivity.”

The Marcello and its companion styles wholesale in about 10 points of sale throughout the U.S. — such as select Saks Fifth Avenue locations — and in Cartier stores. The bags retail from $1,250 to $25,500.

Introduced in 1860, the Cartier pen was often produced with the same level of care as a necklace or ring—set in platinum, or gold-dipped tortoise set in diamonds or cabachons. Inkwells were made of agate or pink crystals. Louis François Cartier often sought inspiration from Egyptian calligraphy, where an iconic writing collection was based on motifs discovered in the Nile Valley. In the early 20th century, Cartier became the official supplier to royal courts, aristocrats, monarchs including the King of Siam, maharajahs, czars and the kings of Spain and England. Today, Cartier pens are made for everyone—spanning price ranges and materials, starting at $210. There are some pens, though, that run to over $1 million for limited edition jeweled pieces.

“Like almost everything else, we started our pen collection at the request of our collectors,” says de Narp. While today’s consumer in general has moved away from the written word — equipped with cell phones, mobile e-mail devices and the like — de Narp notes his writing business has not suffered. “There is nothing like a nice pen to offer to someone. It’s a very important sale and is often a gift for an exciting event or a special occasion.

“Today the environment is tough, but our clients are finding authenticity and craftsmanship and we offer them all these values inside a red box,” de Narp says. “We never compromise.”

Eyewear is another major focus of Cartier’s nonjewelry items. Its first optical piece was introduced in 1887 for the Princess of Essling, and featured a blond shell and diamond lorgnette. Louis Cartier became besieged with requests for such creations and thus created a steady flow of lorgnettes, magnifying glasses and opera glasses (including one special piece paved with over 440 diamonds).

In 1932, Jeanne Lanvin commissioned the first pair of Cartier eyeglasses, but it wasn’t until 1983 that the firm officially entered the eyewear industry with a wide collection of styles such as the Vendôme and Must designs. Today, the category spans 350 wholesale doors and comprises four collections of optical as well as sunwear.

Many of Cartier’s other categories, particularly home goods, were started to tap into the gift business. Clocks and picture frames in the style of Louis XVI were often the appropriate presents for high society weddings and special occasions. While currently these collections represent a fraction of the firm’s overall business, de Narp is intent on making them a more significant part of Cartier’s offerings.

“Everyone knows Cartier dwells in watch-making and, in a way, accessories are under the shadow of the jewelry and watch business, but we are looking for ways to get them known and get them out there without sacrificing the handcrafted quality associated with our brand,” says de Narp. “Our challenge used to be how to display and showcase these accessories properly. But now, with an accessories salon in each of our main stores in North America, we have accessories experts and people to take you through the world of Cartier accessories and to showcase their beauty.”