The limited-edition gold and diamond jewels will retail exclusively in Mexico, the U.S. and Japan while the silver range will sell globally. 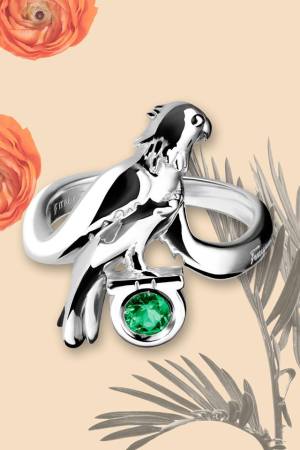 The collection represents the first introduction of what eventually will be 10 gold and diamond pieces and more than 1,000 pieces of silver collars, earrings, rings and bracelets to be carried in Ferragamo stores until spring 2017. It evokes nature and wild birds and draws inspiration from the Italian luxury house’s silk handkerchiefs and Ars shoes, which were designed in the Fifties but reinvented for a modern woman. As well as diamonds, the pieces use green topaz and purple amethyst.

The limited-edition gold and diamond jewels, which will retail for up to $8,500, will retail exclusively in Mexico, the U.S. and Japan while the silver range will sell globally, said Ferragamo Mexico and Latin America director Corinne Ortega.

The collaboration stemmed from Ferragamo’s desire to promote emerging talent and Villegas’ past bijuterie collection, for which she partnered with Ferragamo’s former creative director Massimiliano Giornetti.

Ortega said Giornetti and Villegas met three years ago. The small range for the house’s bijoux line debuted in fall 2014.

The designs by Villegas, who is married to Sami Villegas, Mexican actress Salma Hayek’s brother, come as Ferragamo is growing in Mexico, the engine for the brand in Latin America, which accounts for 5 percent of group sales. Sales rose 12 percent to 72.4 million euros, or $78.9 million at average exchange, last year amid a buoyant luxury market and the firm’s efforts to promote and distinguish itself from a growing spate of competitors.

“We make a constant effort to understand Mexican consumers and their necessities,” Ortega said during the jewelry launch at Ferragamo’s shop in upscale Mexico City mall Via Santa Fe, adding that Ferragamo has stepped up its custom-tailored business recently, allowing customers to build their own “parigi driver’”range loafers and providing more mix-and-match options.

“They can choose the leather, color, sole and buckle, as well as put their initials on the shoe. Mexicans love that,” she said.

Ferragamo operates eight stand-alone stores in Mexico and 22 corners in the El Palacio de Hierro luxury department-store chain. It also has four shops in Brazil and one in Argentina and Chile.

Villegas, who has 24 points of sale and roughly $1 million in sales, said the collection has strong Mexican folklore elements.

“Silver is very Mexican and we love to express ourselves and be happy. The parakeet and parrot convey that joy,” she said.  “I also wanted to bring in the classic elements of Ferragamo by using the Gancini symbol and make the collection for global appeal.”