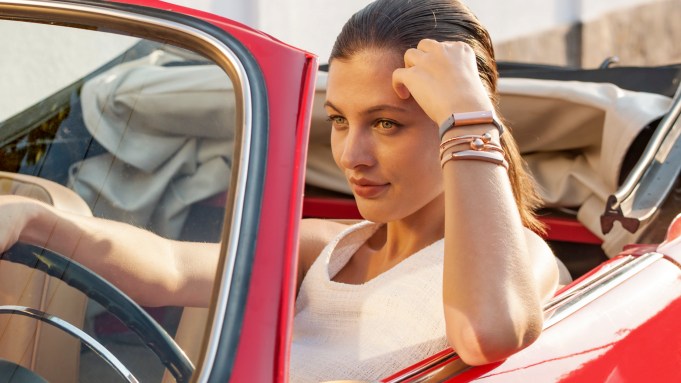 Just as the typewriter evolved into a computer, bracelets and necklaces are morphing into connected accessories.

At least, that’s the thinking behind Misfit’s Ray, a design-minded wearable that performs a range of functions and today is expanding with 20 new colors and accessories.

The Ray is a cylindrical device that can be worn interchangeably as a bracelet or necklace and connects with the users smartphone, signaling them with vibrations and colored lights. In addition to sleep and activity tracking, it provides text and call notifications; a silent wake-up alarm, and “smart button” functionality to, for example, play music, take a photo with a phone or turn the lights on and off.

Misfit, which was acquired by Fossil Group Inc. for $260 million in a deal cut last year, unveiled Ray in four styles at CES this past January.  The latest update to the device adds leather and stainless steel options, which more closely resembles jewelry.

The Fossil relationship has been key in getting Misfit’s access the broader jewelry and watch market, said Misfit general manager Preston Moxcey. Fossil’s well-defined supply chain has helped the brand, for instance, get placement among the “traditional” watches at Macy’s.

“The demand and breadth are really there,” Moxcey said. “Fossil provided the marketplace.”

After introducing the Ray in January, Moxcey said the response and encouragement from users was good. In addition to the additional styles coming out today and in the next few weeks, he said the offering a stainless steel, rather than only aluminum or plastic, was a major step forward for an activity tracker.

“Anything that is worn on the body is highly personal, and we believe brand and design matter,” he said. He also said the tech side of wearable tech would start to fade from notice. “Watches are wearables — people have been glancing at their wrist for 100 years.”

He said the momentum for the category has been building. “Two to three years ago, we would be talking about what an activity tracker does,” he said. “Now we are explaining why you need a steel or gold one. We are really moving into the accessories and style part.”

“We are so tied to our smartphone, yet so many people want to break that tie,” he said. “Once the devices are connected, they become communications devices, which is magical.”

In March, Fossil Group said its launch of 100 wearables products, including display and nondisplay watches and trackers, would be available in 40 countries and more than 20 languages by the holiday season.