The jeweler introduces a patented concept based around the rose. 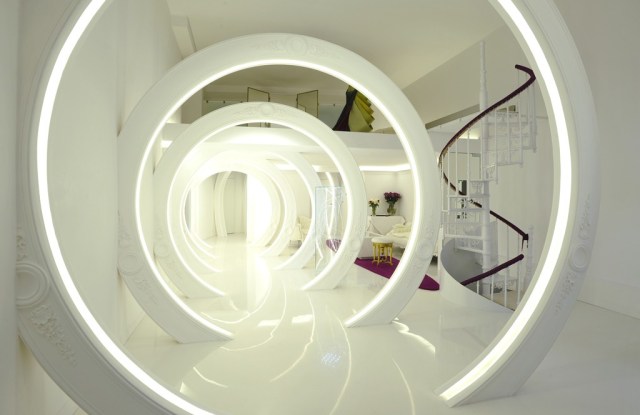 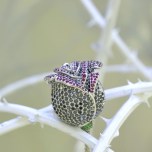 PARIS — Not many fine jewelry stores employ an ivory python to guard their wares. But then there’s nothing conventional about the newly opened boutique, Frédéric Aymes, situated on Place de Valois, a stone’s throw from Palais Royal here.

Resembling a white cube gallery space, with a white resin floor, customers walk through a short tunnel of giant round white plaster rings with white lighting to reach the boutique’s salon area, which has a fuchsia rug and throne-like neo baroque sofa covered in fake fur. The store measures around 900 square feet. “I was inspired by the idea of Alice in Wonderland going down the hole,” said Aymes, referring to the arches, which carry ornate moldings, recalling a Parisian apartment.

The designer has spent the past decade perfecting his patented concept: a precious transformable rose pendant, which can be unclipped to form a pair of petal-shaped earrings, a ring and a pendant, or left as a full rose pendant on a chain decorated with small thorns.

Materials include black diamonds, ruby, onyx, pink sapphire and gold. Prices are available on request. “The concept is based around the idea of offering roses. The rose was the flower which best leant itself to the technicality of the product,” said the designer, who is setting up his design atelier in the site’s basement.

For now Aymes has five rose creations, which are placed around the store. One rose nestles among a tangle of white thorns in a glass cabinet, for instance, while another floats between two plates of glass, watched over by the store’s beady-eyed python, coiled around a pile of pink wooden branches behind the glass. “He’s the guardian of the rose,” said Aymes.