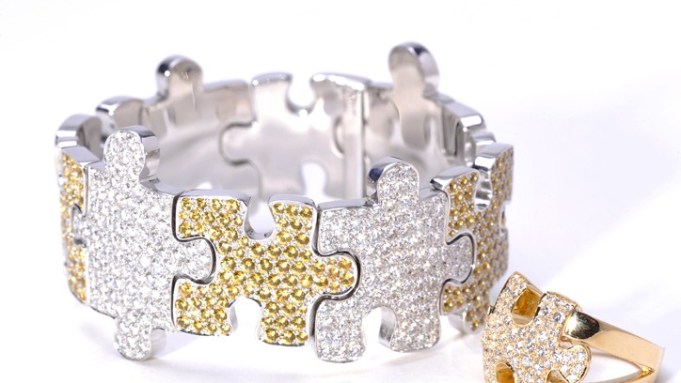 PARIS — Ready-to-wear may take center stage this week, but an intriguing range of accessories awaits visitors to Paris Fashion Week. Here’s a look at some of the newest in the arena.

Not many Kalashnikov bullets carry 7,000 euro, or $10,200, price tags. But then, not many come constructed from white gold, their brushed tips flecked with pavé diamonds.

Fine jewelry newcomer Caroline Gaspard, who will be launching her Akillis collection this week, said the loaded charms are designed to bring out one’s “inner James Bond girl.”

“I wanted to create a collection that was inventive and interchangeable, with a new, rather aggressive [spirit],” said the 26-year-old designer, whose other lines include diamond-encrusted jigsaw puzzle pieces and link bracelets inspired by her father’s Rolex watches.

Gaspard’s ambition is to shake up fusty attitudes to fine jewelry.

“Women tend to either buy classic jewelry or cheap fashion-forward pieces, even if they have big means,” she said. “It’s time to add a bit of fun and fashion to this frosty world.”

Man has forever imitated nature. But Israeli jewelry designer Tzuri Gueta has brought the art to new heights with his realistic imitations crafted from silicon, silk and viscose fiber blends.

Gueta launched his jewelry line two years ago following years of working as a couture textile designer and researcher.

“When I work with coral, say, I don’t remove it from its habitat. I prefer to be inspired by nature, but not use it,” said the designer, whose spring collection is inspired by bones, horn and fossils, as a poetic study of the elegant structure of animal skeletons.

Gueta’s vision is to explore materials differently from the way people are accustomed to seeing it in jewelry.

“I want to show a new material that can really imitate and push forward innovation, as well as show its advantages,” he said, describing how silicon, an ultralight and soft material, also caresses the shape of the body. “It’s very similar to our organs in structure and can imitate a wide range of matter, be it glass, wood, leather.”

“I like surprising color mixes and the idea of encrusting motifs on colored stones,” said Reyre, who also favors contrasting high-low materials, such as resin with precious and semiprecious stones like tourmalines, amber, rubies and sapphires.