With the precious metal hovering around $1,400 an ounce, down 13 percent from a year ago, jewelers are returning to their golden roots. 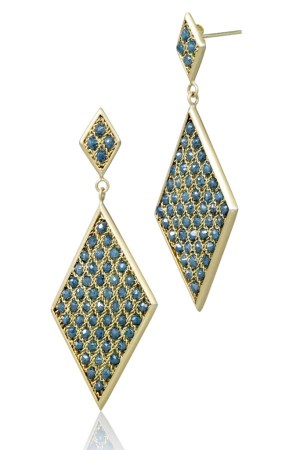 This B Corp Fine Jeweler Is Reimagining Vintage, Lab-grown Diamonds

LAS VEGAS — Falling prices have given gold a boost — at least in the jewelry world.

With the precious metal hovering around $1,400 an ounce, down 13 percent from a year ago, and rising consumer confidence, jewelers such as Jude Frances and Armenta, which had relied on sterling silver sales for the last few years, are returning to their golden roots.

“This season marks a turning point back to gold,” said Jude Frances cofounder and designer Frances Gadbois. “We went down that road where sales became 60 percent silver and 40 percent gold, but now it’s the opposite. People were nervous the last three years, and now there’s more optimism. They’re not throwing money at you, but they’re spending more.”

The new shine on gold was evident throughout the Couture and JCK shows, which ended their five-day runs at the Wynn and the Mandalay Bay Convention Center here on June 3. Optimism on the trade-show floors felt as tangible as the pricey baubles on display.

Jude Frances offered electroform “hollow ware” that gave the statement look while using less metal, such as a quilted cuff for $5,900 and link necklace for $12,000. At Armenta, a solid yellow gold and green onyx ring for $5,600 was selling out.

Judith Ripka also went deeper into its 18-karat collection, offering densely jeweled cuffs for $80,000. “Our investment in more 18-karat gold and the collection having an elevated point of view is paying off. Our constituents are back wanting more and that’s a good sign,” said Charles M. Jayson, president of The Judith Ripka Companies, Inc.

Lagos, the 36-year-old brand known for its silver statement pieces retailing from $200 to $2,000, introduced a 60-piece gold collection launching exclusively at Neiman Marcus stores this fall. “We saw an opportunity in the everyday gold space by making lighter, younger, more modern pieces. Trend follows the price. If you’re priced under $5,000, that defines the amount of gold you use,” said founder and designer Steven Lagos. The collection, priced from $500 to $8,500 retail, features Lagos’ signature caviar beading on thinner hoops and smaller pendants along with bigger necklaces and earrings accented with carved jade, carnelian and Burmese ruby to layer in color and Art Deco flair.

The World Gold Council, which showcased pieces commissioned for amfAR’s Cannes event on the Couture stage along with a newly launched social media site and photo studio, took back-to-back meetings with jewelers looking to work with gold while helping to broaden its consumer appeal.

“One reason yellow gold in particular seems to be trending is the visual association with luxury. People know it’s a precious commodity and they want it to show in their jewelry,” said WGC’s director of jewelry Sally Morrison. “The price was a barrier to young designers for a long time, so by giving them financial support to use more gold, we can create relevance for a younger consumer.”

Other brands, such as Kara Ross and Coomi, went to the high-end extreme. Ross launched her first fine jewelry collection, Petra, at the show to coincide with her 10th anniversary. The colorful 50-piece collection ranges from $1,800 to $50,000 retail and is based on yellow gold, diamond and gemstone Pangea rings with movable parts to signify the earth and its shifting continents. Other pieces feature the same jagged-edge motif and juxtapose polished gemstones with their natural rough-hewn counterparts. “It cost a fortune to put together and took me a year-and-a-half, but I made sure there is a cohesive story and the pieces are sellable,” said Ross.

Coomi introduced several one-off high jewelry pieces, including a $1.4 million ruby necklace with “floating” diamonds that give the illusion of no metal used in the setting. “Twenty-five percent of these pieces have sold after two days,” said designer Coomi Bhasin. “The high-end customer is reaching for something new and different. A lot are saying they want white gold, which is also a bit unexpected.”

Kwiat was also seeing a greater demand for high-end diamond pieces, a part of the business that chief financial officer Greg Kwiat called “pretty robust for the past two years. Optimism builds on optimism, even if it’s bit by bit.” On expanding its offerings from classic white diamond jewelry into larger, colored diamond pieces that looked like bubbles and cobblestones (priced from $70,000 to $180,000 retail), Kwiat said, “To remain relevant, we need to bring in what’s interesting and exciting.”

Chopard saw opportunity to launch a midrange line to sit between its entry level Happy Diamonds collection ($2,820 to $4,950 retail) and its high jewelry, which starts at $100,000. The 19-piece Classic Diamond collection features white diamonds set in white and rose gold ranging from a $9,590 multistone ring to $78,530 line drop earrings.

Five years after launching at JCK, Ivanka Trump Fine Jewelry made its Couture debut in a private ballroom, showcasing 85 pieces in four new collections. “We’ve grown rapidly for a fine jewelry brand launched in a tumultuous economy,” said Ivanka Trump. “It’s been a nice validation of my thesis, which was to offer self-purchasing women a value proposition by marrying glamorous and youthful.”

Geoffrey N. Hess, president of Ivanka Trump, said, “The brand is reaching that critical point where product has to be king because there’s a lot of competition for leisure dollars. The market got flooded with cheaper jewelry, but ultimately consumers want investment-worthy pieces.”

Still, designers continued to push the trend envelope at both shows. Hand bracelets, double-finger rings and ear cuffs gained momentum, as did smaller, more delicate necklaces and earrings. Movable parts, such as ombré diamond and sapphire petals that opened and closed on Arunashi’s flower ring, showcased craftsmanship and materials.

Booths were awash with color as blue and green stones continued, although rubies seemed to be picking up steam for next year. “With supply and pricing more consistent, designers are feeling empowered to get creative with colored stones,” said Gemfields chief executive officer Ian Harebottle. Unusual color and material combinations also were more prevalent, such as morganite and paraiba tourmaline at Deanna Hamro and polished yellow jasper with faceted orange citrine at Colette.

While Couture and JCK are among the most important showcases for jewelry, Andrea Hansen, former chief executive officer of Ivanka Trump Fine Jewelry and president-elect of the Women’s Jewelry Association, stressed the importance of day-to-day business as well. Speaking as part of JCK’s lecture series, Hansen, who recently founded LuxeIntelligence, a brand intelligence, business development and global sales firm, said, “It’s amazing how little designers know about running a retail organization. Will and talent aren’t enough. You have to know your point of view, pricing, assortment and competitors. Retailers are overwhelmed with the amount of designers at a show. If you can impress a retailer in 30 seconds, you may get five more minutes, but otherwise, there’s very little selling space available.”

Hansen said cash flow was the biggest issue affecting young brands. “I’m coaching clients on how to get from A to B and how to stay in business.”