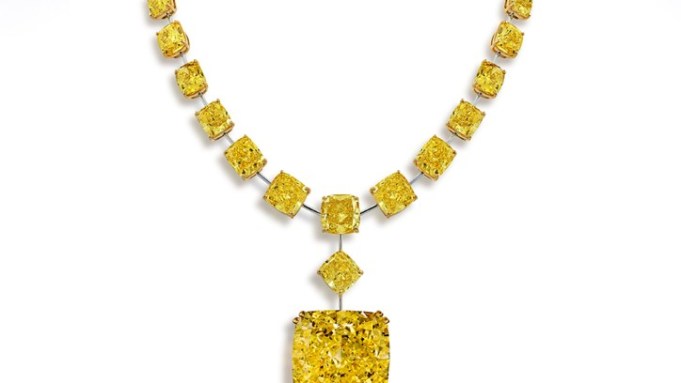 NEW YORK — Amidst the economic doldrums, Graff is out to generate a little excitement.

Two years in the making, the jeweler is at last opening a larger flagship on Madison Avenue here. And while the timing is far from ideal, Henri Barguirdjian, president and chief executive of Graff, America, insists it might just be what the market needs.

“The business, right now is OK,” he said. “It’s not the best environment we’ve ever had, but it’s not the disaster that the financial publications have covered. People want to diversify their investments.”

Fifty percent of Graff’s sales stem from the U.S. Barguirdjian said tourists from South America and the Middle East kept salespeople busy this summer and that the buzz of the new boutique has been bringing back “old friends” to the neighborhood.

“The store is generating excitement. The world economy cannot go up, up, up forever,” said Barguirdjian. “The [financial] crisis took on a strong, scary magnitude. Everyone is on a learning curve.”

He added the company would still employ growth strategies it has set for itself, not only the store but also marketing and private selling events.

“We needed to have a proper flagship store in America, since the business has grown so fast,” said Barguirdjian.

“We wanted something different, contemporary and luxurious and inviting to clients at the same time,” added Barguirdjian of the flagship, which has been two years in the making. “For fine jewelry [stores], it’s challenging. They can be a bit standoffish. You need to be able to see what goes on inside, so you aren’t afraid to walk in.”

Graff entered the U.S. in 2001, and now has stores in Chicago, Las Vegas, and Bal Harbour and Palm Beach, Fla. In the U.S., the brand is also sold at nine Saks Fifth Avenue units. There are a total of 30 Graff stores across the globe, including London, Monte Carlo and Kuwait. Last year alone, the firm opened stores in Geneva, Tokyo and Hong Kong.

The Manhattan flagship, which will be feted with a private party tonight, replaces the company’s 800-square-foot space up the avenue. Barguirdjian said there simply wasn’t enough room to fulfill the volume potential.

Designed by architect Peter Marino, who has created retail spaces for the likes of Fendi, Valentino and Chanel, the new store, located at 710 Madison Avenue, is 4,000 square feet with three levels of selling space. Offices are on the fourth level.

Marino said he was inspired by the quality of Graff diamonds in his design of the boutique. “I kept his namesake vitrines, ebonized them and put them in a luxurious residential context where any of his customers might want to live,” said Marino.

The facade of honed Luget limestone with unbroken window lines leads into the store’s foyer with a double-height ceiling and walls of marquetry paneling of European walnut and parchment. The windows are partially lined in a custom brass grill that acts as a veil to the outside world, but still allows light in. The ground floor contains several sales desks, while the upper floors offer a more private setting for purchases. Freestanding signature rotating vitrines are featured in each window.

A console and table by André Dubreuil dot the store. The VIP salon on the third floor is modeled after a living room, with a sofa, club chairs and a portrait of Laurence Graff in diamond matrix by artist Vik Muniz.

The store’s inventory counts some of the most important stones on the market, including the Flame Diamond, a 100-carat D Flawless pear shape white diamond and the Tsarina, a 90.14-carat fancy intense yellow cushion cut pendant set into a necklace of fancy vivid yellow radiant-cut diamonds. Barguirdjian said the average sale at Graff is $200,000. Prices start at $15,000 and go into the millions.

Barguirdjian declined to project sales for the store or overall company volume, but a 2007 profile of Laurence Graff in Forbes magazine said the privately held firm had an increase in sales to $400 million in 2006 from $90 million in 2000, with after-tax profits soaring to $48 million from $11 million.

The past several years have been fruitful times for high jewelers, many of which expanded their businesses in the U.S. and abroad. Chopard launched a high jewelry collection 11 years ago and opened a large flagship last year that competes with Graff, Harry Winston, Cartier and De Beers. Leviev, which is known for its large colored and colorless diamonds, opened its second store, on Madison Avenue, last year. Unlikely entries into the high-priced diamond jewelry arena took their bows on Madison Avenue as well, including Ivanka Trump and Di Modolo, which moved several blocks up the street and launched a high jewelry line with Catherine Zeta-Jones as its face. Even Kwiat, which began as a diamond dealer and later moved into wholesale branded diamond jewelry, opened a store on the patrician strip.

Last year, executives marveled they could not keep high carat diamonds and gemstones in stock. Today, the mood is far different. While there are some hot pockets, since the economic collapse business has been spotty. Several executives admitted that business has slowed, but the cogs are still turning.

“The market is a little bit static, but people are interested in buying stones,” said Andrew Jassin, managing director of consulting firm Jassin-O’Rourke Group LLC, which has some fine jewelry clients. “A lot of the money that has disappeared has been portfolio money….People didn’t use that money to make discretionary purchases. There is a large cadre of people who are very wealthy who would want something…though it’s not a robust market, it’s a market where customers are definitely looking.”

Many brands are increasing their public relations and marketing efforts in order to increase market share.

“In order for them to keep their profile up for customers from Asia, Europe, the U.S., stores have to represent the brand, too,” added Jassin of luxury brands. “The U.S. is a showcase for the world.”

Laurence Graff, chairman and founder of Graff said: “I opened the first Graff salon in America eight years ago and since then, the American market and desire for Graff jewels have grown tremendously. It makes perfect sense to open a larger landmark store on Madison Avenue. The new U.S. flagship boutique embodies my vision of the brand and will be continued globally.“