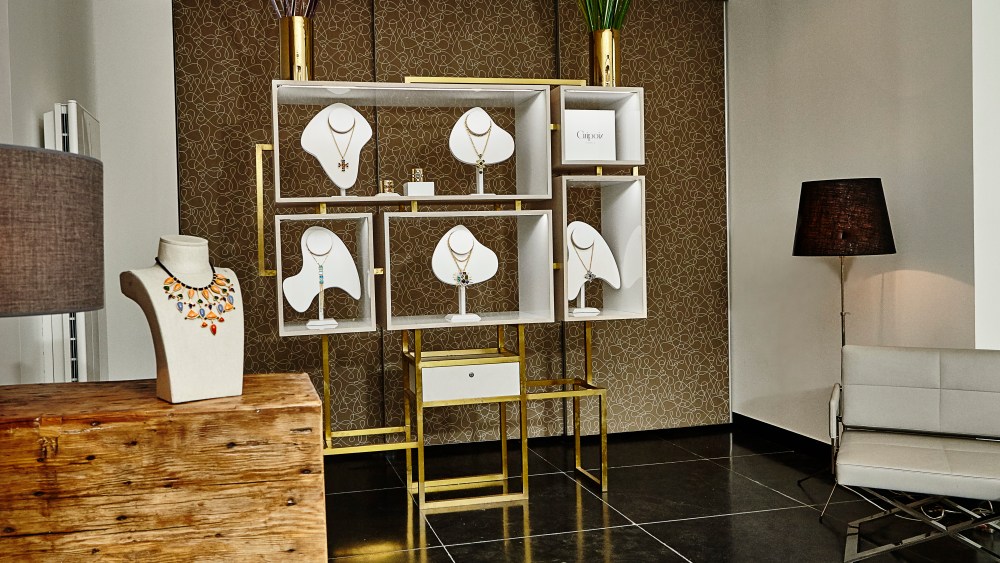 PARIS — Gripoix is going back to its roots.

The storied Paris jeweler has set up its first store in the French capital under the house’s new ownership helmed by Marie Kesslasy, who snapped up the brand in 2006.

Gripoix, which dates to 1869, has become known as a costume jewelry specialist following collaborations with some of fashion’s biggest names, including Chanel, Balenciaga, Dior, Balmain and Elsa Schiaparelli.

Its “poured-glass” technique, invented by the firm’s founder Augustine Gripoix, is considered unique. “The way it works is that a colored glass stick is heated and then poured directly into the mold instead of being glued or blown, so that it may look like a stone, when it really is glass,” explained Kesslasy, who is also the brand’s artistic director. “And what makes it special is that it’s handmade in France,” she added.

The new 970-square-foot venue at 14, Place des Victoires unites shop and workshop under one roof, as the brand is looking to grow its offering.

Kesslasy said she was trying to develop the Gripoix label in two ways: “via its own collection and via collaborations with other couture houses,” noting that the company also offers made-to-measure services.

Following the closing of its London outpost on Bond Street, which according to the brand’s owner had to shutter due to “bad timing” while the area was undergoing heavy works and inhibited business, Gripoix is currently available through select wholesale accounts such as Matchesfashion, Moda Operandi, Le Bon Marché, Bloomingdale’s and Boon the Shop.

“Our main markets are still France and the U.K., but I want to push the U.S. more. American women have a culture for custom jewelry, and unlike here in France, they are very well familiar with the brand’s history,” Kesslasy observed.

With a strong focus on color, Gripoix’s signature items include Byzantine-inspired cross pendants, camellia-adorned necklaces and the so-called lozenge sautoirs, which come in various lengths and range from sober to bold color combinations.