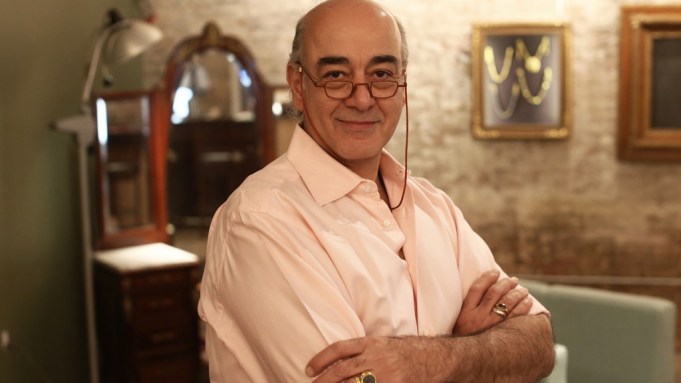 NEW YORK — Gurhan Orhan’s first retail location is a 1,500-square-foot atelier in TriBeCa with an open workroom where he can collaborate with clients on custom pieces.

The space, at 160 Franklin Street, was formerly a refrigeration warehouse. Gurhan gutted it and plans to open offices in the front.

With a large semicircular bar with stools dividing the work area from the rest of the store, the atelier feels both rustic and refined. Heavy doors were salvaged from a wine cellar in Argentina and display cases in elaborate picture frames were made by Gurhan, who’s known in the industry by his first name.

Gurhan, 59, came to jewelry making at age 41, learning the techniques of ancient jewelers and using the materials they used. For example, pure 24-karat gold, which has a different color than 22-karat or 14-karat. “I’m reincarnating the metal of ancient goldsmiths,” he said, noting that pure gold is “different to work with. You have to do almost everything by hand.” Gurhan does keep one foot in the 21st century, augmenting his techniques with computerized models and wax casting.

Platinum, silver and bronze are also part of Gurhan’s repertoire — he designed a collection in pure silver — but the main metal is gold, which Gurhan uses to embellish Victorian cameos, bronzes from Rome and coins and crosses from Byzantium. He sets early Roman micromosaics and Egyptian scarabs in gold for necklaces.

Gurhan also has a supply of stones, from citron to topaz to diamonds at the ready to show clients interested in making original jewelry.

In 2010, he introduced a combination of an early Ottoman alloy containing 4 karats of gold and 24-karat gold, as well as a new way of setting diamonds.

He next wants to introduce bridal jewelry.

His wife, Fiona Tilley, is the company’s president and chief executive officer. “This is a turning point for the company,” she said. “We decided to do more retail and make bespoke jewelry. The traditional retail model is struggling right now. We’ll start heavily retailing on the Web. We launched e-commerce last month. We have a large following online.”