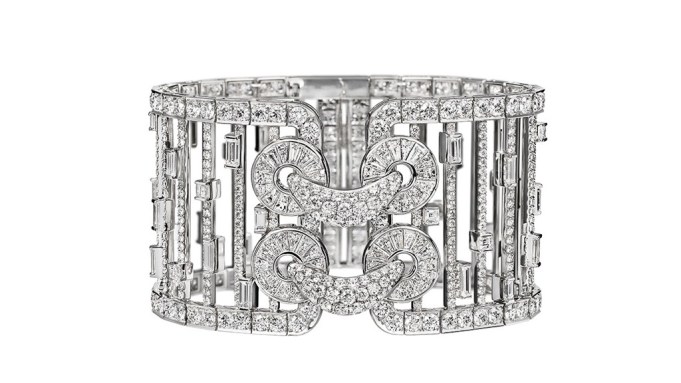 “If I could, I would attach the diamonds directly onto a woman’s skin.”

Harry Winston’s famous words continue to reverberate through the halls of the Fifth Avenue jewelry house that he founded in 1932, and they particularly informed its new collection, Ultimate Adornments. The lineup of 40 one-of-a-kind diamond and platinum necklaces, bracelets, rings and earrings — the largest single collection in Winston’s history — is inspired by the idea of dressing a woman in diamonds. Instead of gowns made from glittering baubles, it takes its cues from seven different dress embellishments for the seven groupings.

“The story is a journey to different cultures and a different part of time,” said Harry Winston’s art director, Sandrine De Laage, sitting in the jeweler’s offices high above midtown Manhattan. “The idea is to catch the sensibility and the language of all these cultures together…of costume adornments worn for centuries.

“We thought, What is an adornment?” she added. “It’s what you put directly onto your skin and body to be beautiful, to celebrate yourself and extraordinary, meaningful moments in your life. This is the translation of that idea into a piece of jewelry.”

The house first unveiled the collection in Shanghai in October to 25 carefully selected couples, all fine jewelry connoisseurs, and will host a similar private affair in Beverly Hills tonight and in New York on Dec. 7.

Ultimate Adornments got its start a little over a year ago, when De Laage and her design team began studying 100,000-plus sketches from the Winston archives, as well as a slew of other reference points. They ended up with seven ultimate inspirations: Indian caftans; guipure lace; Point d’alençon lace; the Chinese study of form called Qipao; Deel, the traditional structured Mongolian dress; the style of the late jeweler’s wife Edna Winston, and, finally, the drapery of Old Hollywood glamour, notably the house’s first Oscars red-carpet moment when Best Actress winner Jennifer Jones wore Winston in 1943.

The Indian-inspired pieces harken back to the late Ambaji Shinde, Harry Winston’s principal jewelry designer for more than four decades, who started in textiles in his native India before moving to New York to work with Winston. The Caftan Tassel necklace, for instance, is made up of 222 diamonds, weighing a total of 68 carats, that snake around the neck and, in a rarity for jewelry, features four different stone settings in one piece — channel, prong, bezel and pavé.

In the guipure grouping, real feathers and diamonds are set together on pieces, while a pair of cascading diamond drop earrings are stunners in the Mrs. Winston category. Everything was made by hand in Harry Winston’s Fifth Avenue workshop, taking up to 1,000 hours to complete. As for their prices, Winston executives would only say that they range from “$37,000 into the millions.”

The collection is a signal of a new strategy taking shape under president and chief executive officer Frédéric de Narp, who took over the helm in January 2010. “We now have the full team and full vision to take the DNA of Harry Winston, the 100,000-piece archive, to the world,” de Narp said, adding that Ultimate Adornments is representative of this strategy. The house is positioning for global expansion with plans to reach sales of $1 billion over the next seven to nine years. A division of the Harry Winston Diamond Corp., the brand had sales of $427.5 million in the 12-month period ended July.

The company also unveiled a boutique at Dubai’s Emirate Towers in November, and will open second salon there at the Dubai Mall by yearend. Next year, Harry Winston is slated to add two salons in Shanghai: a three-story pavilion in Xintiandi and a smaller shop in the lobby of The Peninsula hotel. Both are being designed by Bill Sofield of Studio Sofield. By fiscal 2016, the jeweler projects to have 35 directly operated Harry Winston salons, 20 partner salons and 300 wholesale doors.

“We are now embarking on expressing the brand,” de Narp said. “It’s a defining moment and it’s very exciting.”