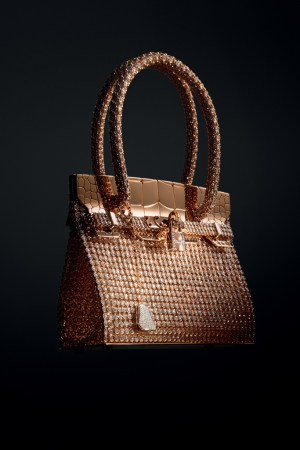 For his second fine jewelry collection for Hermès, Pierre Hardy created miniature versions of the house’s iconic handbags that sit somewhere between objets d’art, adornment and accessory. The designer said that he wanted to tackle a different facet of Hermès, after paying homage to the luxury brand’s equestrian roots with his first “haute bijouterie” line in 2010.

This story first appeared in the March 8, 2012 issue of WWD. Subscribe Today.

“This is the other Hermès icon, after the horse,” Hardy said. “The idea was to start with the house’s famous bags, like the Kelly or the Birkin, and to turn them into jewels.” Standing around six inches high, the pieces faithfully reproduce the details of the bags that inspired them. The Kelly is made of dozens of pink gold articulated scales meant to evoke crocodile, in a process that required 1,200 hours of labor and which Hermès is now patenting. Opening and shutting like a real bag, the Kelly is set with 1,160 diamonds weighing a total of 34 carats, and the sides are made of gold chain mail. The Birkin comes in pink and white gold, and is set with 2,712 diamonds weighing close to 90 carats. It features a padlock set with diamonds in the shape of the letter H, and an actual key inside its diamond-encrusted lanyard, known as a clochette.

The collection is completed by the Nausicaa, a rose gold chainmail bag dripping with diamonds hanging from fine chains, and the Chaîne d’ancre, a rigid casing made from interlocked strands of Hermès’ iconic anchor chain bracelet — a stunning technical feat that involved no less than 11,303 diamonds.

The ultraprecious minaudièrelike designs can be carried as a conventional evening purse or worn as a bracelet. The Kelly and Birkin can also be hung from the shoulder, courtesy of a detachable black strap. Each of the designs is limited to three editions.