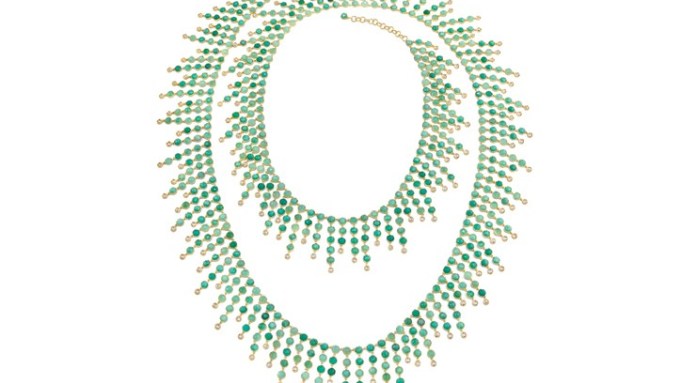 Push has come to shove.

After years of booming sales, fierce expansion and blowout advertising campaigns, the fiscal crisis has caused fine jewelry brands to rethink their strategies for 2009. While many brands are sticking with their luxury ethos and staying upmarket, others are keeping their options open with silver lines and other more affordable alternatives.

Despite the financial turmoil, companies remain somewhat buoyant about next year.

At the firm’s annual holiday luncheon last month, Tiffany & Co. chairman and ceo Michael Kowalski said, “Clearly, consumers have been shaken by recent events. They are looking now for institutions they can trust and count on. We believe Tiffany is one.

“For over 170 years we have weathered economic dislocation, civil wars and world wars, periods of irrational exuberance, periods of excessive pessimism and of debilitating fear. But through it all we have continued to produce exquisite things valued for generations….So if there is a convenient truth for Tiffany today it is simply this: In good times and bad, people seek beauty and joy, and they still celebrate important occasions.”

Several brands have lessened or diminished their advertising budgets, but many others feel it’s still important to be out there and be counted. So brands such as Graff, Van Cleef & Arpels, David Yurman and John Hardy are employing marketing and sales initiatives to bolster brand awareness and strengthen customer relations. Graff will continue to host its intimate client events, and Yurman is reaching out to existing clients to sample the brand’s new fragrance, as well as host trunk shows.

“We’ve adapted our business model to really handle the situation as it is today,” said Paul Blum, Yurman’s ceo. “We are going to maintain our position in the luxury category.”

Yurman will continue to develop its international business and expand its diamond collection, and next fall the brand will open a new flagship on Madison Avenue, which is being called “the town house” inside the company.

Van Cleef & Arpels has an aggressive retail expansion in line for 2009. There are plans to open five stores in North America in the next 15 to 18 months, continuing with the rate of growth in recent years for the brand. The firm is also bolstering public relations efforts to gain market share.

“Given the expense, [advertising and marketing] is something that we’re going to be more prudent about,” said Emmanuel Perrin, president and ceo of Van Cleef & Arpels North America. “We’ll do selected events.”

De Beers, the diamond jewelry firm, has no store openings planned for next year, as it takes a breather from a busy 2008.

“In 2008, we doubled the number of De Beers stores worldwide from 25 to 50, and in the U.S. from five to 11,” said Hamida Belkadi, chief operating officer of De Beers U.S. “In 2009, we do not plan on opening any additional stores and will focus on solidifying the existing 11 stores in each local market.”

Recent entries into the silver category, such as Leslie Green, Ippolita and Stephen Webster, are performing well. Retailers credit their success to the rich look and a more accessible price point compared with gold lines.

Slane and Slane and John Hardy, two brands with roots in silver, are continuing to do trunk shows to entice customers with new merchandise and to connect them to the brand.

“It is very important to us to speak to our strategy,” said John Hardy ceo Damien Dernoncourt. “We don’t want to change our focus all the time because things are changing.”

Hardy is still in a growth mode. The firm, with its core business in North America, opened wholesale accounts in Russia and at Le Bon Marché in Paris this fall. It will continue to grow into those markets, as well as the Middle East.

“Sales for the last three months were not what we were planning them to be a year ago, but we are still growing,” added Dernoncourt, who added that the sweet spot is $850.

Silver is a growing category and will continue to be strong next year. Marco Bicego, the Italian firm that has an average price point of $2,000, reported increases for 2008 so far and will focus on existing retail accounts with Saks Fifth Avenue, Neiman Marcus, Bloomingdale’s and Bailey Banks & Biddle. Marco Bicego is sold in a network of 450 doors and the U.S. is the brand’s largest market, though it is increasing its business with accounts in Russia and Dubai, as well as locations across Europe.

Bicego has begun to dabble in one-of-a-kind high jewelry pieces with success. Last month, the company sold a pair of earrings for $110,000.

Several smaller jewelers are thriving. Last month, Sharon Khazzam launched the Sharon Khazzam Rare Collection at Barneys New York. The line of extraordinary diamond pieces includes stones such as a 72-carat yellow diamond briolette. Khazzam said there is a lot of interest and that sales are continuing.

McTeigue & McClelland, a fine jewelry firm based in Great Barrington, Mass., opened a new private salon to sell its limited diamond and gemstone jewelry. Los Angeles-based designer Irene Neuwirth said there is a demand for high-ticket items above $40,000, and Ella Gafter continues to see demand for its rarefied jewelry with South Sea pearls, diamonds and rubies.

Prince Dimitri, a descendant of Catherine de Medici and Mary, Queen of Scots, who started a jewelry line in 1990, has moved on to designing only one-off pieces of jewelry and art. His pieces range from $27,000 to $2.2 million. One standout is a topiary modeled after the ones at L’Orangerie de Versailles, which include three whopping cabochon emeralds amounting to 89 carats.

“I have some American and some Russian [clients],” said Prince Dimitri. “It’s for people who have seen it all….It took a village to make [it all].”

“We take a long-term perspective on the things that we’re buying,” said Siegelson. “Our clients watch CNBC and are concerned with different factors economically, but we’re selling the same type of jewelry we’ve sold before. It’s slowed a bit, but overall if you’re worried about your livelihood and existence, you’re not necessarily going to go out and buy a piece of jewelry.”