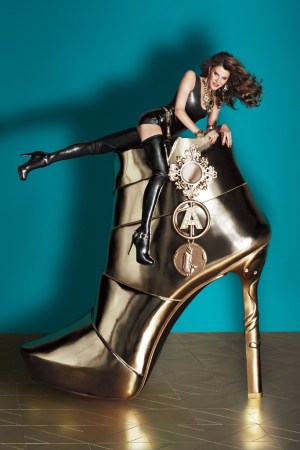 PARIS — With her collection of extravagant accessories for H&M — which range from sunglasses with gold Baroque frames to a fascinator topped with a stuffed bird — Anna Dello Russo hopes to make every day “a sensational fashion day.”

The Swedish high-street retailer today unveiled the full look book for the line, which is due to go on sale in about 140 H&M stores worldwide on Oct. 4.

Consisting of about 50 items including jewelry, sunglasses, shoes, bags and a trolley, it is priced from $24.95 for pendant earrings inspired by antique jewelry to $299 for thigh-high black leather boots.

“Accessories are like vitamins to fashion — as such, you should use them liberally,” Dello Russo said.

The Italian fashion editor and style blogger will celebrate the launch on Sept. 27 with a ball at the Paradis Latin cabaret in Paris, featuring a special performance by Azealia Banks and other guest acts.

She no doubt will take advantage of her fashion week appearances to showcase her new creations, which also include a chunky gold and turquoise cuff, thick gilded chains festooned with trinkets and bracelets shaped like snakes — not to mention a variety of skyscraper heels.

“There is something feisty and over the top in this collection,” noted Margareta van den Bosch, creative adviser for H&M.

Many of the items feature a personal touch, like the turquoise clutch with a clasp shaped like Dello Russo’s dog Cucciolina. She said the starting point was a turquoise suitcase with gilt motifs.

“I wanted to re-create the excitement of the fashion week tour, when you enter a dreamy fashion bubble that is almost a parallel reality. I tried to capture that sense of freedom, joy and excitement,” she said.

“Airports will be less gray and impersonal if you bring this kind of travelwear with you. It’s like a dash of fairy tale magic, or Alice’s white rabbit — a door to a new dimension,” she added.

That fantasy dimension is also evident in the advertising campaign, shot by Mert Alas and Marcus Piggott. One image features Dello Russo, who is fashion director at large and creative consultant at Vogue Japan, straddling a giant gold shoe. As reported, H&M has also released “Fashion Shower,” a song and music video directed by Alex Turvey, to mark the occasion.

Dello Russo, who spent 18 years at Condé Nast Italia as fashion editor of Vogue Italia and editor of L’Uomo Vogue, has taken advantage of her belated Internet fame to launch a series of collaborations. Last fall, she was tapped as the editor at large for INC, styling and appearing in ads for the Macy’s private label brand.

Dello Russo pledged to donate a portion of her commission for the H&M project to the Japanese branch of the International Red Cross.