The holiday season generated a boost in business for accessories and jewelry brands showing at the Premiere Classe and Eclat de Mode trade fairs. 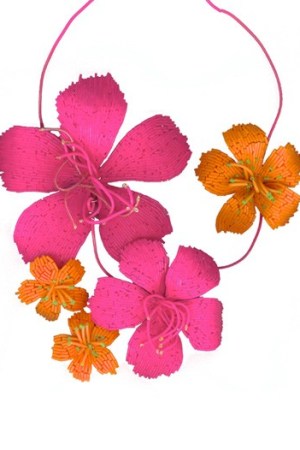 Retailers scrutinized prices, but were generally less tense about the economic downturn, exhibitors said. Combined traffic to Premiere Classe and the adjacent Who’s Next fair rose by 5 percent compared with last September’s session, to 57,733 visitors.

Homages to Michael Jackson surfaced across jewelry collections. Fashion fever also took hold, from Anne-Marie Herckes’ brooches loaded with miniature outfits of style icons such as Audrey Hepburn and Karl Lagerfeld, to Défilés’ charming, hand-made enamel pendants and pins based on silhouettes from this season’s collections.

The European economy “is much better than the States, no question,” said Jessica Kagan Cushman, designer of her namesake American accessories brand.

Making flexibility a priority, the designer said she had adjusted prices, increased product variety and bulked up on stock for immediate delivery.

“Everyone’s aware of the currency; it more than doubles prices for us,” the spokeswoman said, referring to the strength of the euro against the U.S. and Canadian dollars.

She added that the store was looking for ethnic jewelry to complement the season’s natural mood.

Elegant cat’s-eye styles were a bestseller for eyewear designer Thierry Lasry, who at the salon’s next edition at the Tuileries garden here in October will launch a jewelry line called Lasry 77:82. Multistrand freshwater pearl necklaces worked best at So Yang, while pliable Panama-style hats were popular at Mühlbauer.

For spring bag trends, it was still a case of extremes: either oversize and slouchy, in butter-soft leathers or compact. Brights and naturals coexisted. Contrasts were at play, such as a colored body with nude handles. Canvas and woven styles were also rife at the show.

Reflecting the times, demand in jewelry continues for trinkets, talismans and message items.

“It doesn’t matter about the price, it’s all about personalizing jewelry, having your own name on it,” said Anna Park, who owns six fashion stores named Anna across England.

Retailers also noted a rush of new gold and diamond collections, such as Lyie Van Rycke, which introduced precious takes on its heart pendants. AS29, a Hong Kong-based jewelry line that markets its gold and diamond designs as medication (the pieces come in pill boxes), also reported robust business.

“Flowers will be big, but there’s also a big return to white,” said a spokeswoman for Le Bon Marché.

In its platform on the Eclat de Mode forecourt, Crystallized Swarovski Elements presented its latest round of designer collaborations. Items included a crystal-studded, lip-shaped clutch by Lulu Guinness and dolly pendants by Servane Gaxotte.

At Eclat de Mode, Jacques Fath presented its first official jewelry collection for the current fall season designed by Philippe Ferrandis, who has acquired the license. The spring line will be unveiled at Premiere Classe in October.