Building London Jewelers into a sprawling retail chain and extending the breadth of merchandise has earned the industry veteran a place in WJA’s Hall of Fame. 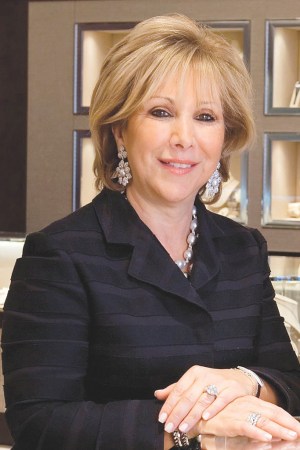 Candy Udell has gone from “mom and pop” to a big family.

The industry veteran, who is slated to accept the Women’s Jewelry Association’s Hall of Fame award tonight, began her career in 1973, working alongside her husband in his family’s store, London Jewelers, which was founded in 1926.

At the time, when the duo began working in the small shop on a corner in the Long Island town of Glen Cove, N.Y., London Jewelers was a mom-and-pop shop that hadn’t yet expanded its footprint.

“My husband and I were married in college, and I went right into the business,” Udell said. “We had one small store. Now we have 12 stores and counting.”

Under the newlyweds’ direction, the business began to grow not only in size but also in scope. Over time, the company solidified relationships with top brands like Cartier, Van Cleef & Arpels and Rolex to offer a diverse selection of high-quality watches and jewelry.

During the height of the recession, Udell explained that London Jewelers was able to trade on its expansive product offering as a way to lure consumers into stores. Shoppers could select from more moderately priced wares, including the boutique’s own private-label collection, or diamond-encrusted designer baubles.

“A few years ago, during the recession, people cut back on jewelry and watches, but it’s slowly been building back up as we’ve seen an improvement in the economy,” she noted, adding that “brands are prepared for the volatility.”

That volatility includes vacillating gold, silver and diamond prices, but according to Udell, London Jewelers has been able to carry high-end labels that aren’t as impacted by costs. Most are larger brands that are able to offset volatile prices, making commodity costs a nonissue. Key to that ability is the fact that the industry has changed, she said.

“Years ago, when we started, everything was mom-and-pop. There were more mom-and-pop manufacturers, for example,” Udell noted. “Today, you are dealing with very big companies, especially in the watch world. Some of it has changed for the better, but you also lose that personal feeling.”

And it’s precisely that personal touch that has driven London Jewelers’ growth, according to the businesswoman.

Having the capacity to attract brands ranging from Patek Philippe and Hermès to David Yurman and Ippolita is a credit to what the Udell calls the company’s forte — its strong customer service.

“We really pride ourselves on that,” she said. “My husband and I are all about personality and building personal relationships. It’s Customer Service 101. We also have a strong advertising team and a trusted, reliable name. We are lucky we were able to turn our name into a brand.”

Throughout the years, the company has also opened boutiques, including David Yurman and Van Cleef & Arpels, which are owned by London Jewelers.

Further building the brand, the Udells launched a concept in 2011 called Two by London, a boutique specializing in engagement and bridal jewelry in Manhasset, N.Y.

Despite her success and strong connections in the jewelry and watch industry, Udell, who has been honored before by WJA for her leadership, admitted to being surprised when the group asked her if she would accept the Hall of Fame nod.

“Of course, I’d be honored,” she laughed. “Women have come so far in this industry, and it’s in part because of the Women’s Jewelry Association.”