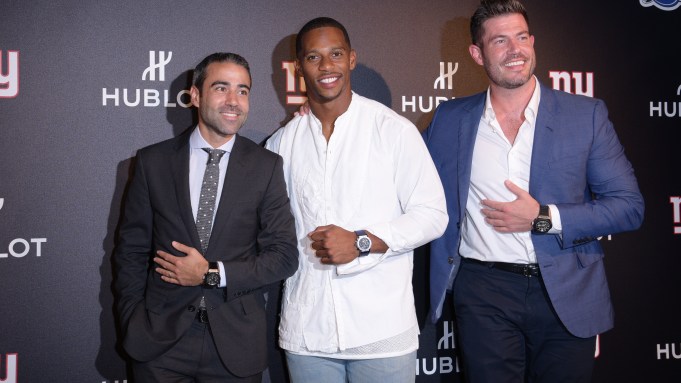 Hublot has teamed with the New York Giants to become the official watch and timekeeper of the NFL team.

The Swiss luxury watch brand celebrated the collaboration Tuesday night in New York City at a luxury tailgate-themed party attended by guests including Damon Harrison, Jesse Palmer and NFL Giant’s player Victor Cruz, who codesigned the Classic Fusion Aerofusion watch, which was inspired by the team.

“I don’t have a lot. Let’s just say I have enough,” said Cruz about his watch collection. “But I started to get into them about 10 or 11 years ago, way before I could even afford them. I started to do some research and become knowledgeable about watches and that’s what led me to Hublot. I’ve been a fan ever since.”

Midway through the event, Cruz chatted with Palmer about the design process, which isn’t completely new territory for Cruz. The fashion-inclined player worked with 3X1 on a capsule denim collection and has a sneaker with Nike, the Air Trainer Cruz, which will be released in two new colorways later this year.

According to Cruz, there are more collaborations in the pipeline, but he is interested in launching his own line at some point.

“I’m doing the early thinking right now to see what it is that I like, what my niche is going to be, what my passions are and take it from there. Right now I want to do a couple more collaborations so I can get my feet wet and really understand what it’s all about. And then I will dive into my own thing soon.”

Cruz took to the field on Sunday after an almost two-season hiatus due to a knee injury.