Chaumet's bees, Van Cleef & Arpels's butterflies, and wheat at Chanel Joaillerie will be on display, as part of the haute couture calendar. 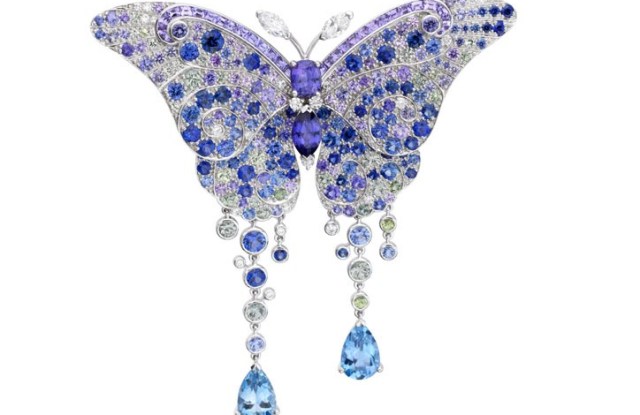 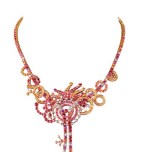 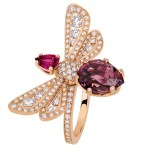 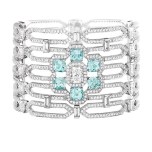 Foot traffic — of the well-heeled variety — is set to intensify this Thursday at Place Vendôme. The day marks the first time fine jewelry houses headquartered on the mythic square will present their precious wares as official members of the Chambre Syndicale’s haute couture calendar. The various collection themes range from bees at Chaumet to butterflies at Van Cleef & Arpels, and wheat at Chanel Joaillerie, while Boucheron is helping celebrate Cirque du Soleil’s 25th anniversary.

Nets at the ready! Emerging for spring from Van Cleef & Arpels’ creative chrysalis is “Papillons,” a collection of delicate moth- and butterfly-inspired pieces, displayed in the boutique around two emblematic butterfly clips: Butterfly Fairy and Mélyté, suspended in a central white cage. Among the highlights is a stunning open-worked platinum and white diamond winter moth, worked with various-size rocks to represent its spots, while a fantasy theme sees butterflies masquerading as flowers. The collection’s pièce de résistance, meanwhile, the Blumei clip, boasts a spectrum of dégradé marquise-cut violet sapphires, round sapphires and pear-shaped aquamarines.

The big top has arrived at Boucheron via a quirky hook-up. Cirque du Soleil founder Guy Laliberté commissioned the jewelry company to create a collection commemorating the circus’ 25th anniversary. Laliberté purchased the entire 20-piece collection, called Inspiria, which will be exhibited at The Montreal Museum of Fine Arts from April to July. Boucheron will produce a second collection of the pieces to be sold shortly in its stores with a percentage of the proceeds going to the One Drop charity.

“It’s like going back to the years when you had these great patrons, Guy being one of them, and working together with the museum to present them to the public. This is a dream for me,” said Jean-Christophe Bedos, Boucheron’s chief executive officer, who added that the project has drawn lots of interest. “What is fascinating about the sociology of the Cirque du Soleil is that it attracts the masses and at the same time generates a great buzz among the elite around the world, which is our consumer base,” he said, adding certain pieces have already been reserved by die-hard Cirque du Soleil fans.

Each necklace evokes a show. The Viva Elvis piece, mainly in diamonds and garnets, plays off Elvis Presley’s pompadour and flared jumpsuit, and the world premiere of Cirque du Soleil’s show honoring Presley will be held at the CityCenter Complex in Las Vegas on Feb. 19. Said Martin Bundock, Cirque’s senior artistic adviser: “It’s a once in a lifetime [project] that’s hopefully the beginning of a long-term collaboration. The collection will be a beautiful physical memory of the creativity of the group.”

The additions to Chanel’s diamonds and pearls heritage include a wheat story. No surprise, since wheat shafts were Coco Chanel’s lucky charm. One necklace features a string of Japanese cultured pearls paired with a shorter fine necklace of navette-cut diamonds evoking wheat grains. These are cinched at the neck by two-carat diamonds to form a cravat effect. Other novelties include a geometric Byzantine-style diamond and paraïba tourmaline Vendôme cuff. A vintage comet brooch from Chanel’s 1932 “Bijoux de Diamants” collection, which marked the start of the fashion house’s fine jewelry activity, will also be on display, as well as a selection of recent reeditions and spin-offs of the house’s iconic ribbons and colored stones.

Heady beeswax fumes filling the hallway of Chaumet’s beautiful Louis XVI-era museum site hints at the house’s latest collection of 17 bee-themed pieces for its “Catch me if…you love me” line. The bee has been an emblem of the house since the age of Napoleon I, who was a Chaumet client. Don’t expect honey-colored sets, however. Creative director Lionel Giraud said he wanted to twist the classic theme by playing with unusual color mixes. Case in point, the collection’s Honeymoon necklace dripping with briolette-cut sweet pink sapphires and round-cut emeralds, and at its center a tilted pear-shaped purple sapphire and diamond bee sucking on a sapphire.

A percentage of the proceeds from the sale of the pieces will go to Terre d’Abeilles, a French association for the protection of bees.