In the Mix: Boticca’s Bazaar

Boticca.com is a lot like an online dating site — for accessories lovers. 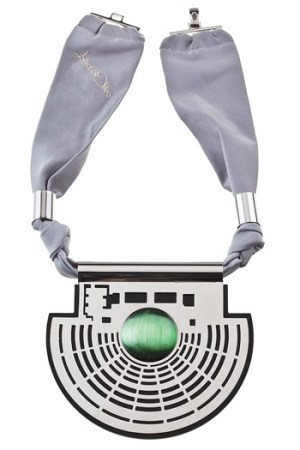 LONDON — Boticca.com is a lot like an online dating site — for accessories lovers.

Customers can fantasize about, flirt with — and in some cases commit to — objects of their affection, be they in metallic pink leather, eel skin or rose gold.

The London-based site, founded by Internet business and marketing veterans Kiyan Foroughi and Avid Larizadeh, acts as a marketplace for small jewelry and accessories businesses worldwide, and a platform for young or unknown talent in a famously fragmented industry.

“We are trying to build the destination for fashion accessories on the Web,” said Foroughi, who is of French-Iranian origin and whose background is in technology mergers and acquisitions and Web-based private equity investing.

The idea for the site dawned on Foroughi when he was in the Medina in Marrakech. He met a jewelry designer who trekked for hours between her home in the Atlas Mountains and the Medina so that she could sell her jewelry. “There has to be a destination that solves these distribution issues and allows these designers to reach customers globally.”

The site, which launched in an alpha version in 2009, has since built up a base of 200 designers in 40 countries. Customers are split evenly between North America, Europe, and the Far East, and the average transaction is $160.

Boticca acts as a link between clients and designers: Customers browse the site, which has an editorial feel with guest editors and a weekly theme such as Seventies styles or Italy, and then order directly from the designer.

Boticca takes a 25 percent commission on the retail price set by the designer — 20 percent if the designer is exclusive to the site. That is substantially less than the 30 to 40 percent markup that a brick-and-mortar store would take.

Designers are also under no pressure to fulfill deadline-driven orders, as is often the case with a brick-and-mortar store that has to maintain inventory. On the site, the vendor states how many items are still available, and whether it can fulfill an order by a certain time.

Like PayPal, the site supports the transactions and ensures they are fulfilled before any money changes hands. Customers can make orders in euros, dollars or pounds, and shipping takes place within one business day.

The site is currently skewed to jewelry, stocking labels including Julie Tuton Jewelry in San Francisco; Larissa Landinez in Florence; Toosis in Istanbul, and YooLa in Israel.

But co-founder Larizadeh, who has an M.B.A. from Harvard and has worked with eBay and Skype, said the aim is to have a more balanced mix of bags, hats, gloves, scarves and hair accessories.

The site already stocks hats by the Italian label SuperDuper Hats; clutches by the Dubai-based Poupee Couture, and obi belts by the British company Uroco.

Staffers scour graduate shows, trade fairs, markets, designers’ own Web sites, and rely on word of mouth, and even applications from the designers themselves to find new talent to showcase.

“We are not looking for hobbyists, but for professionals,” said Larizadeh, adding that they are also looking for a compelling back story from the label; good quality merchandise, and professional customer service.

This year, Boticca received $2.5 million in funding from retail, luxury and e-commerce investors including John Ayton and Annoushka Ducas, the founders of Links of London and the Annoushka jewelry brand.

That investment will be used to accelerate growth by expanding its marketing efforts and editorial elements, bringing new talent on board and enhancing the customer experience. The overheads are inherently small at Boticca, which is based in Covent Garden, with money being spent on processing fees and administration.

“So far, we’ve spent a lot of time trying to make this site a delightful experience for customers and to help market the designers,” said Larizadeh. “We think it’s a great category segment to be in, because it’s with accessories — rather than clothes — that you’re able to make a unique statement.”