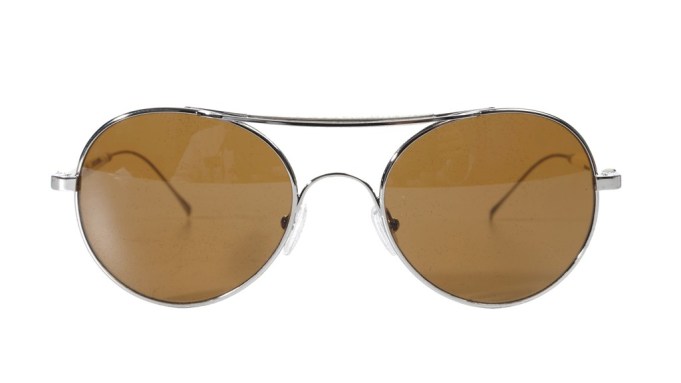 The smaller metal aviators have an acetate brow bar and modernized cable temples, a hallmark of Fifties utilitarian eyewear that kept glasses snug on the face. The tribal print — an update of surfboard maker and artist Shawn Stussy’s iconic Tom Tom design from the Eighties, redrawn by artist Kate Gibbs — is featured on the temple of the silver and bone colorway and on the cleaning cloth and case. All styles retail for $275.

“Eyewear has always been a part of our heritage because we started by the beach,” says David Sinatra, whose father Frank (no relation to the singer) cofounded the apparel brand with Shawn Stussy. “There’s a mutual understanding of each other’s California roots.”

Creating museum-worthy art out of a slab of concrete is not easy, but Kara Ross relishes a challenge.

When asked to contribute to the Museum of Arts and Design’s “Multiple Exposures” — an August 2013 exhibit that will combine photography and jewelry — Ross looked to the raw materials at New York’s Hudson Yards, where her husband works as a developer.

“We got some of the concrete that is being used there, as well as black-and-white photos of what the space looked like before and during the demolition, and what some of the beautiful buildings will look like once the project is done,” Ross says.

The finished piece, named Transformation, is an oversize polished concrete necklace with said images set inside sterling-silver frames, held together by multicolored sapphires. As of now, Ross has no plans to mass-produce the design once the exhibit ends, opting to retain it as a single piece of art. “Working with museums is a huge honor,” says Ross. “It only reinforces that jewelry is an art medium.”

NEXT: Martin Katz Looks Back and Forward >>

MARTIN KATZ LOOKS BACK AND FORWARD

In the late Nineties and early Aughts, Martin Katz’s diamond and platinum jewelry became a symbol of Hollywood glamour on the red carpet. To commemorate his business’ 25th anniversary, the Beverly Hills jeweler is going back into the vault — and oftentimes his clients’ vaults — to assemble a retrospective collection planned for spring in his Los Angeles store.

Pieces on display — none of which will be for sale — include 15-year-old micro pavé bands, a 2001 tulip pin with spinning interchangeable heads and a 12-year-old bijoux de mer collection made using a 19th-century silver-top technique (white metals were nonexistent so silver was layered on top of gold as the setting for stones).

One of Katz’s personal favorites is a cabochon ruby strawberry pin, circa 1999. “I love pins. They’re the greatest canvas of expression because you’re not limited by size,” he says. “I don’t like the term brooch because they’re not for a mature grandmother.”

Along with the old, there will also be new: Katz is designing a 25-piece anniversary collection that puts the focus on major stones. One ring, for instance, features a 10-carat fancy yellow cushion diamond, accented with 230 baguette and micro pavé diamonds ($385,000).

As for the next 25 years, Katz says he plans to return to artistry. “Artists lead the market because the client’s taste isn’t always caught up to theirs,” he says, “but it’s a way to move things forward.”

NEXT: From Law to Luxury >>

FROM LAW TO LUXURY

After spending four years as a lawyer, including two of them at Citigroup, Ella McHugh called it quits in 2009 so she could pursue her true passion. She enrolled in design classes at the Fashion Institute of Technology and in early 2011 interned for leather goods company Mark Cross, all while crafting her new handbag collection, which launches for spring.

“It’s taken a while,” says McHugh. “I had some designs in mind and I’ve always been really interested in the early 20th century and the silver-screen era. I wanted to encapsulate that in a modern way.” Each of the 12 silhouettes, including a hobo, clutch, evening bag and carry-alls, takes inspiration from the Art Deco movement, with sleek hardware touches. The Italian-made bags are done in a mix of lambskin, calfskin, alligator and python, all with a semiprecious stone, such as black onyx, pietersite or fancy agate, added for a touch of texture and opulence. “It was a conscious choice on my part to go really high luxury,” McHugh notes. “I think of the bags as a functional piece of art — an investment piece.” Thus retail prices range from $1,500 for a black-and-white calfskin clutch to $8,600 for a smoky quartz-embellished shoulder bag in alligator skin. So far, Boyd’s in Philadelphia, Saks Jandel in Chevy Chase, Md., and Barbara/Jean in Little Rock, Ark., have picked up the line.

NEXT: Monica’s Got a Brand New Bag >>

MONICA’S GOT A BRAND NEW BAG

Photographer-turned-home-decor-guru-turned-jewelry-designer Monica Rich Kosann has added a new venture: handbags. The vintage-inspired collection, an exclusive to Bergdorf Goodman this season, comes after more than a year of design and planning.

“I didn’t want to get into the bag world unless I really had something to say,” Kosann says. “In the 1900s, all of the accessories were really elegant and chic. They were something women carried around with them — they were pieces of art.”

Kosann’s lineup focuses on leather and washed metal clutches handcrafted in Italy (from $1,975 to $5,740), with an emphasis on day-to-night versatility. Each clutch is lined in bright marigold calfskin — Kosann’s signature color, she says — and includes an optional chain strap with invisible hinges.

And while high-end craftsmanship and elegance rank high on Kosann’s list of design priorities, function is still key. “They all hold iPhones, of course,” says Kosann. “Everything was based on that — carrying the new iPhone 5.”

In Hollywood, there’s method acting, and now, it appears, method retailing. Tucked away in a back courtyard of the bustling Sunset Plaza shopping area, jewelry designer Kimberly McDonald’s first store is designed to look like a chic rock dwelling to echo the natural stones and crystals she builds her line around.

“I wanted it to look like a cave that some crazy princess found and tricked out with little luxury items,” she says of the 600-square-foot boutique that opened last week. “I even wanted it to feel cool and dark inside.”

McDonald balanced the buffed cement floors, ground mica-painted walls and recycled steel shelves with soft elements such as floor-to-20-foot-ceiling gray flannel curtains and a matching sofa covered with agate-printed pillows from her home collection. There are also reclaimed wooden tables with geodes in the stainless steel legs ($2,200) and museumlike alcoves that showcase large crystal specimens, including the Laguna agate that inspired the home print.

In addition to women’s and men’s jewelry ($2,200 for a macramé geode bracelet to $250,000 for a large one-of-a-kind cross in geode, recycled yellow gold and 55 carats worth of diamonds), the store houses tabletops like Lucite and teak geode boxes, paperweights and bookends.

“Neiman Marcus is an amazing partner but I also have clients who don’t necessarily shop in bigger stores,” McDonald notes. “They’re looking for that one-on-one that’s hard to achieve. The business needs both kinds of retail.”