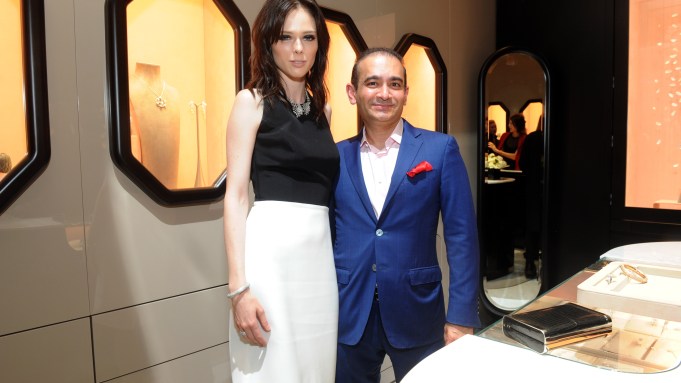 Earlier this month Modi opened his first store in the U.S. on Madison Avenue — the first Indian jeweler on the street, with Hermès, Chanel and Givenchy nearby — and followed that up by unveiling his first unit in Hong Kong, in the Elements Mall.

The New York launch was accompanied by a rooftop dinner party at Rockefeller Center with guests including Naomi Watts, Coco Rocha, Lisa Haydon and Nimrat Kaur. But the main topic of conversation was the Maharani diamond necklace and earrings set, valued at $1.65 million, that Modi chose for the store window.

While the Maharani necklace had 94 carats of diamonds — maharani itself means “queen” in Hindi — Modi said his real design inspiration is bringing more of that splendor to each woman. “If you look at it, what does a woman really want?” he said. “To look spectacular every day, to be noticed and feel appreciated. It’s what inspires me to bring out the delicacy and design that is understated and not in-your-face.”

Modi is a third generation jeweler with family spread across the world. His brother works with him, taking care of Russia and South Africa. Modi grew up in Belgium, where his father had moved to work in the diamond business.

Modi has had a hand in retail for some time now — his company Firestar Diamond acquired U.S. firms Fredrick Goldman and Sandberg & Sikorski, which also owns bridal jewelery retailer A. Jaffe, in 2005 and 2007, respectively. The companies operate in more than 200 points of sale in the U.S.

But the Nirav Modi brand has started expanding into its own retail. He launched his first store in New Delhi, at a corner location in Defence Colony, in South Delhi, in 2014. The 6,000-square-foot store remains his flagship. The second, in Mumbai, at 4,000 square feet, opened last May. Like the 700-square-foot New York store, the Indian units were designed by Spanish artist-designer Jaime Hayon.

Backing his growth plan is his strong financial position. He was listed as one of the richest men in India in 2014, with a wealth of $1.52 billion. His company, Firestar Diamond, had a turnover of $1.7 billion last year.

“It’s a big step for an Indian jeweler, designing every jewel in India for the global market,” he said. “And we have some of the finest craftsmen in the world, so it just makes sense.”